Two contemporary photographers, Teresa Eng and Sarah Lee, will be coming to RPS House on 14th March 2020 for a lecture event following the Contemporary SIG AGM will be held in the morning of 14 March, see separate event post for this

Teresa Eng’s work has been featured in publications such as Vogue Italia, British Journal of Photography, Dazed & Confused, Raw View, Invisible Photographer Asia, Photoworks, and L’Oeil de la Photography. In 2018, Eng was a finalist for the Photographie Grand Prix at Hyères 33e festival of fashion and photography.  In 2019 she was runner up in the Aperture Portfolio Prize with her project “China Dream”.

Teresa Eng works on long term projects that deal with transition and change and will talk to us about her recent projects.  “China Dream” and “Elephant and Castle” are examples of her work.

Growing up in Vancouver, Eng was only able to construct her vision of China from the cultural norms and traditions she experienced there.  Upon traveling to China in 2013 Eng was confronted with a stark contrast to her imagined state; drawing from cultural preconceptions formed in her youth she began photographically exploring the country. The resulting series, China Dream, evokes cycles of reconstruction and reinterpretation of the past happening in China due to the immense development occurring throughout the nation.

Elephant and Castle area was once relatively affordable but is undergoing rapid change, with 21 projects (costing over £4bn) either underway or in the pipeline, making it one of Europe’s largest regeneration projects ever.  Living in Elephant and Castle has presented Eng with an opportunity to document the transformation and the effect this has on the people who live there. The result is Elephant, a ten-year-long project.

Sarah shoots professionally for The Guardian newspaper, her work has also appeared in Time magazine, Billboard and The Sunday Times.  She also works with the band Coldplay, shooting publicity imagery for their albums and tours.  Sarah is an official BAFTA Photographer and an official Ambassador for Leica Camera. She is a fellow of the British American Project, and a also a Fellow of the Royal Society of Arts.  She is also Ambassador for the BJP’s global Portrait of Humanity initiative.

Sarah is working on an extensive long-term project on the urban American experience with the writer, novelist and broadcaster Laura Barton as well as a long-term feature work "West of West" in California, recently published by Unbound.

A portfolio of Sarah’s projects including studies of a famous tennis club, “All England”, a series on people travelling on night buses in London, “Tender are the Nighthawks”, and portraits taken at BAFTA awards ceremonies in “Behind the Curtain “ can be seen at https://www.sarahmlee.com/ 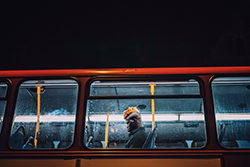 Image above from Tender are the Nighthawks, (c) Sarah Lee.

The group annual general meeting will be held in RPS HQ in Bristol in March 2020.