Your web browser is out of date. Update your browser for more security, speed and the best experience on this site.
Find out more
We use cookies and similar technologies to optimise your experience when using this site, to help us understand site usage, and to tailor our advertising on third party sites. Read about Cookies and view our Privacy Policy at the bottom of each page on our website at any time.
A JavaScript execution error has occurred somewhere on this page. The page may not function as intended. Try refreshing before continuing.
Published 14 September 2022
RPS Landscape Group

The Marais By Gerald Phillipson ARPS

The Marais is a region of wetland  in SW France.  Covering an area of 25 hectors it is the largest limestone wetland in the Dordogne and is protected  by the Regional Nature Reserves of Aquitaine. Access is by a two kilometre circuit of duckboard walkways and footbridges. 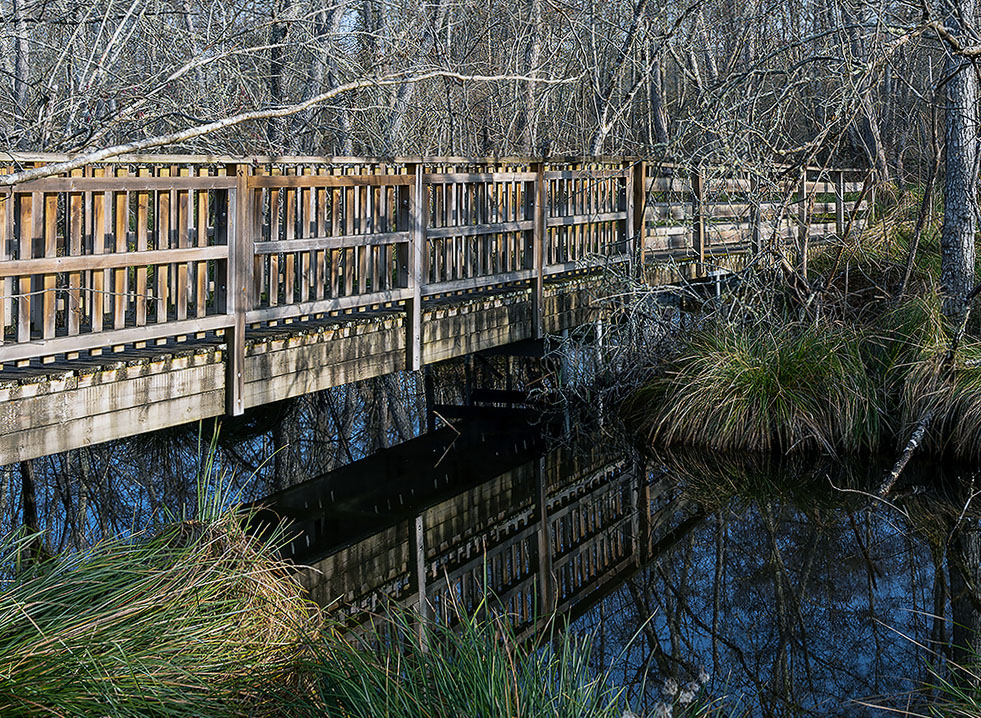 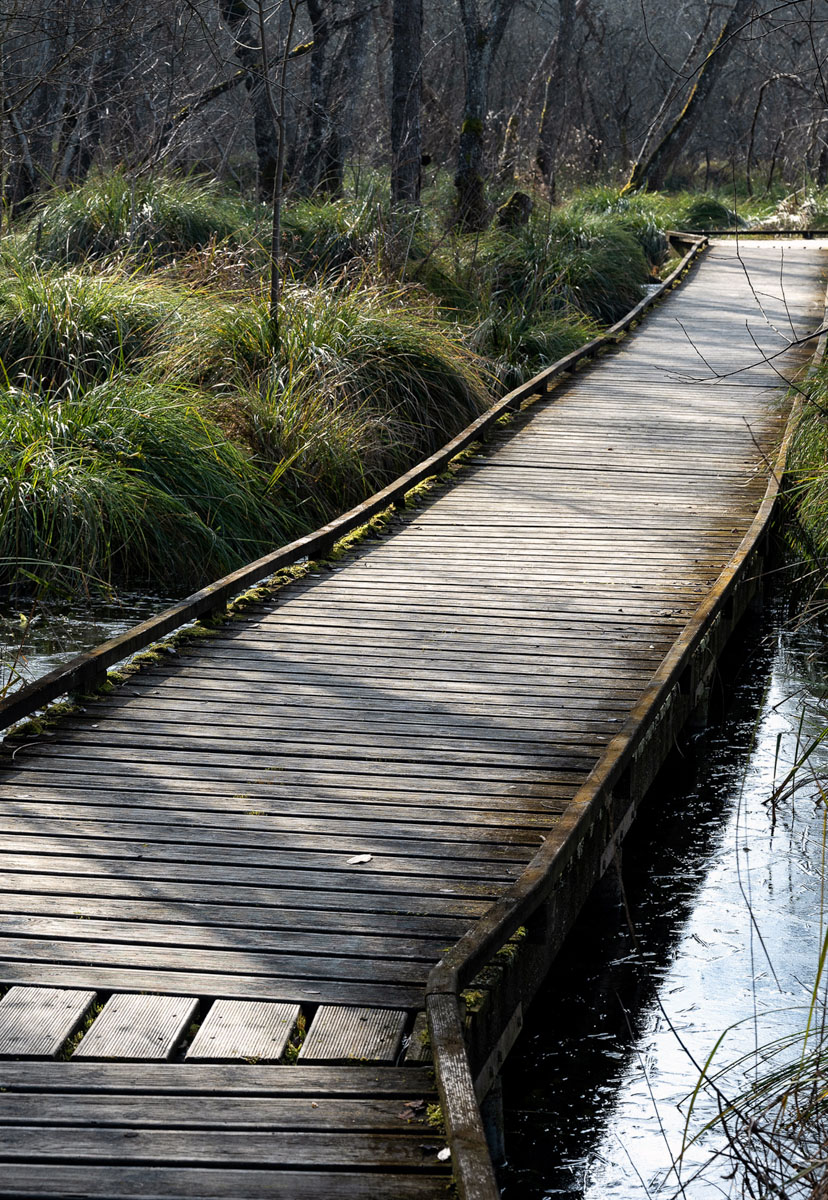 I have been photographing the Marais for several years in all seasons and hours of the day. What first drew my attention was the quality of the light when the sun penetrated the alders and willows casting shadows across the water enhancing the luminosity of the scene. In spring and summer the ponds and channels are enclosed by the emerald greenness of the dense woodland. This provides a habitat for distinctive plants and flowers while the  water courses host a variety of birds, mammals and fish. The water level is fed by a small river flowing into it from the south and maintained buy a controlled exit into a large neighbouring lake. 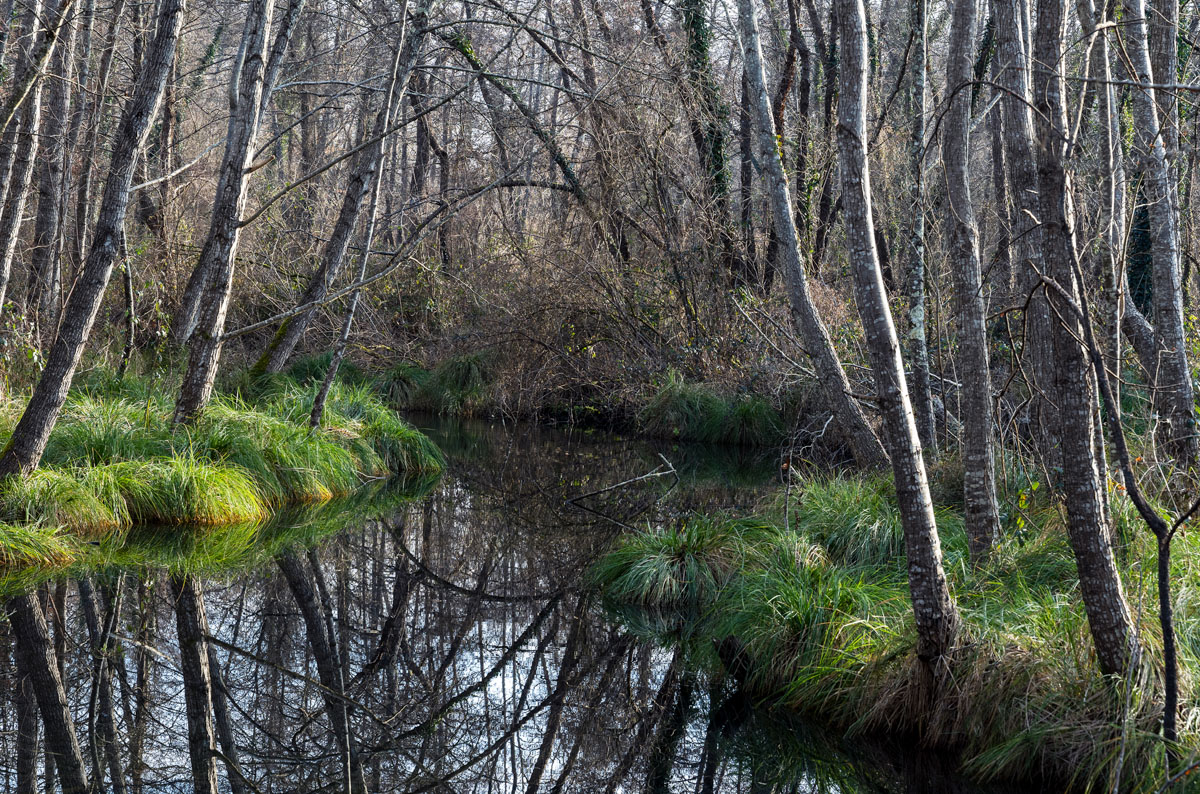 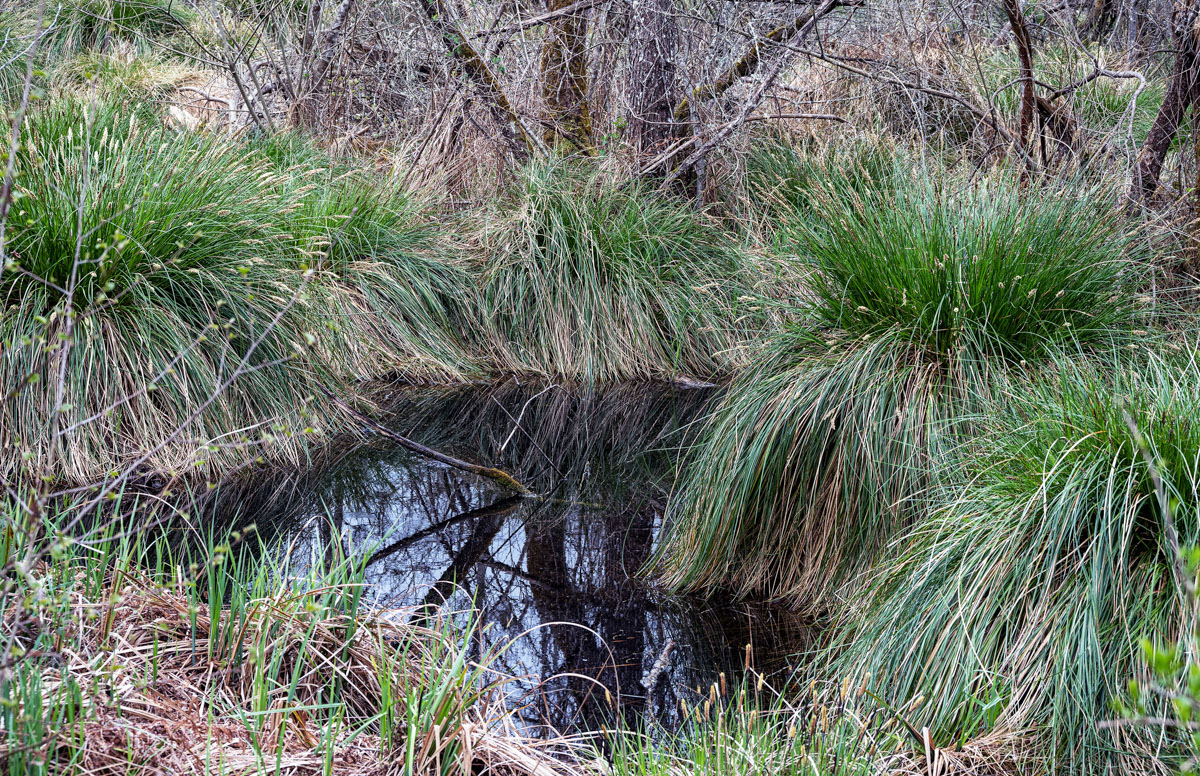 While the nature reserve was the location, my subject was not the natural history of the Marais nor the manmade duckboards and bridges by which it is accessed, as my Statement of Intent explains:

“The Marais is an area of wetland about nine kilometres from my home in France. It consists of inlets, ponds, winding watercourses and streams that infiltrate the dense woodland around  it. 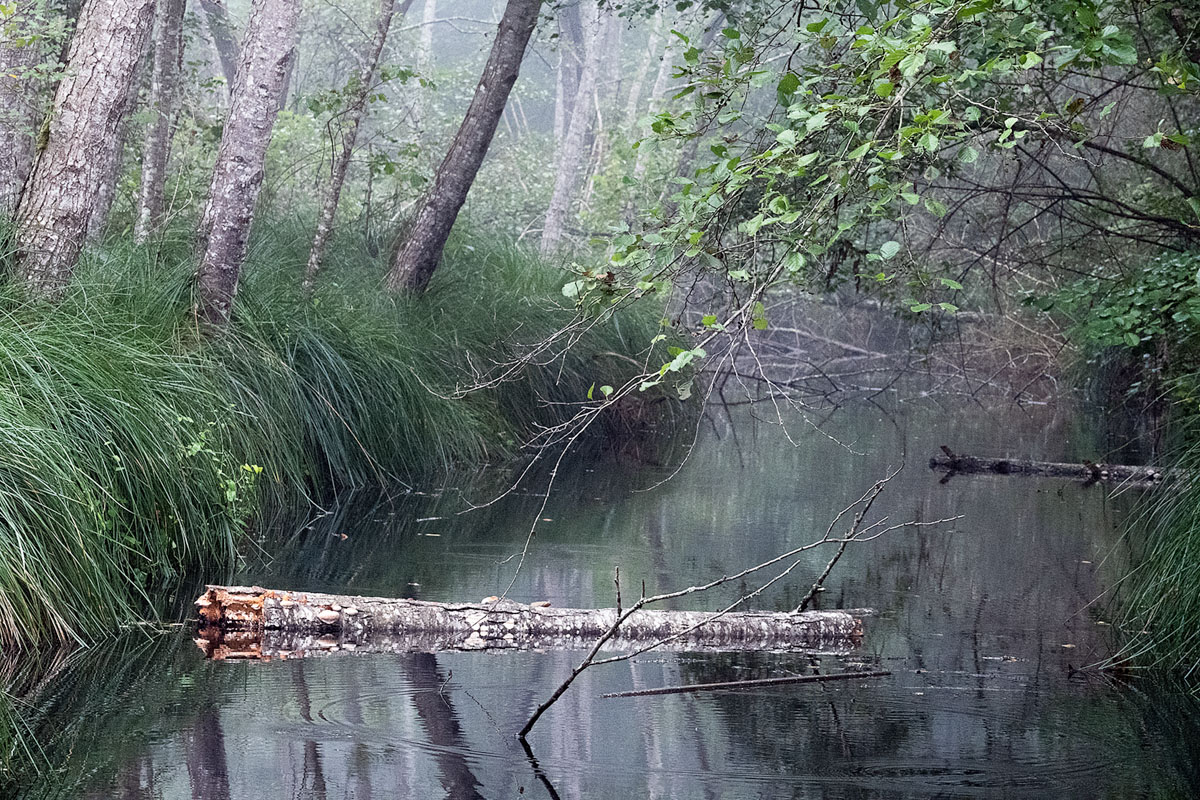 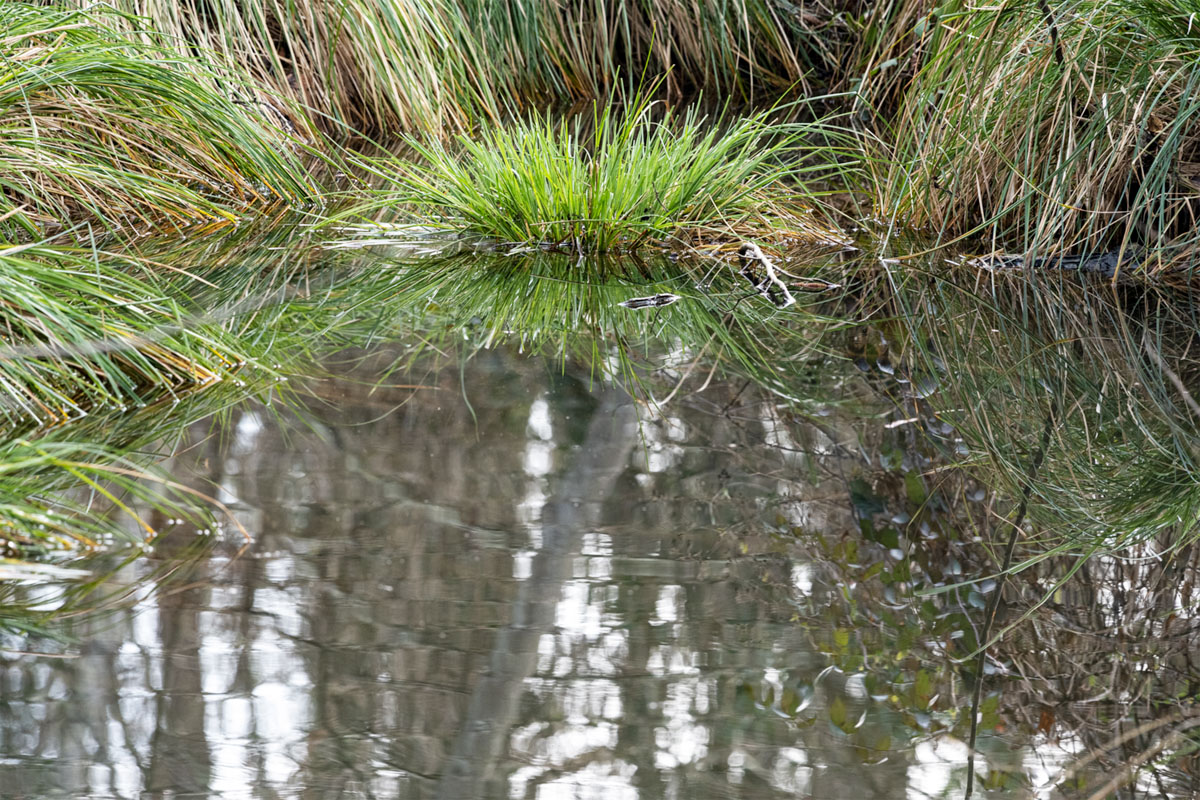 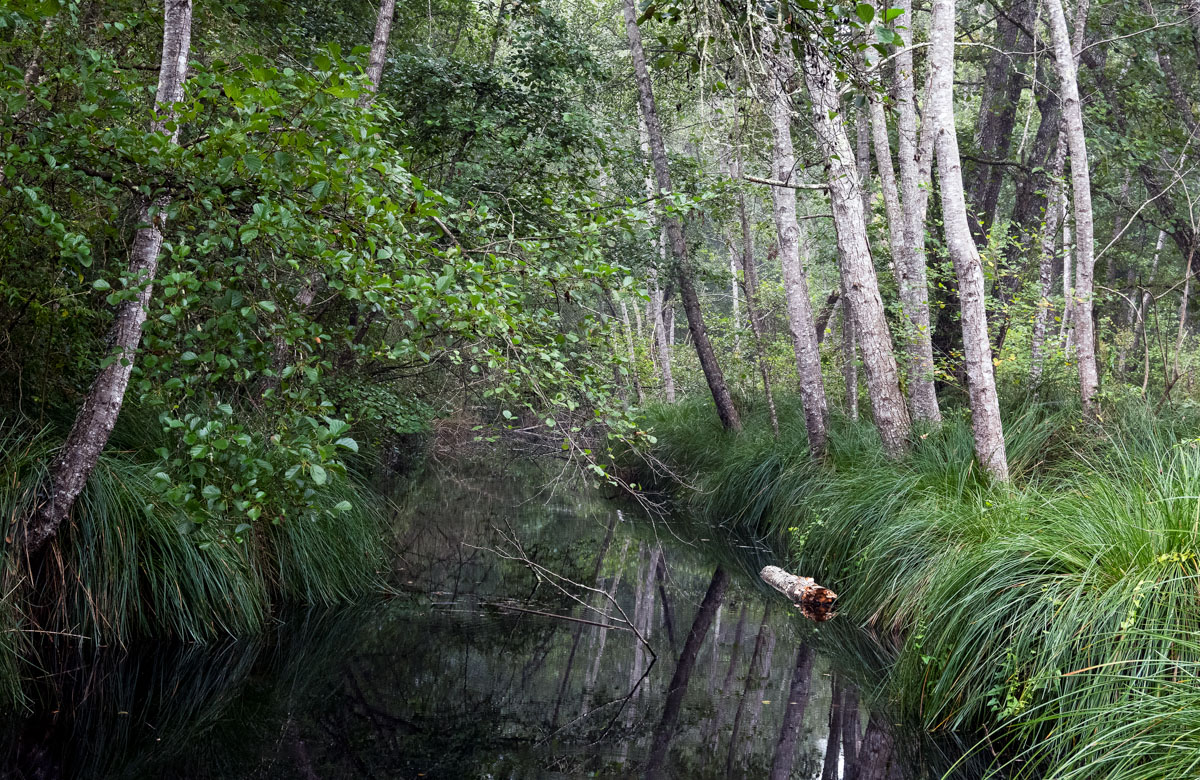 There is only minimum maintenance, thus fallen logs and foliage are left to rot in the water while some of the narrower channels become overgrown with trees hedging them in and hanging over them. The result is that the light is often sombre. 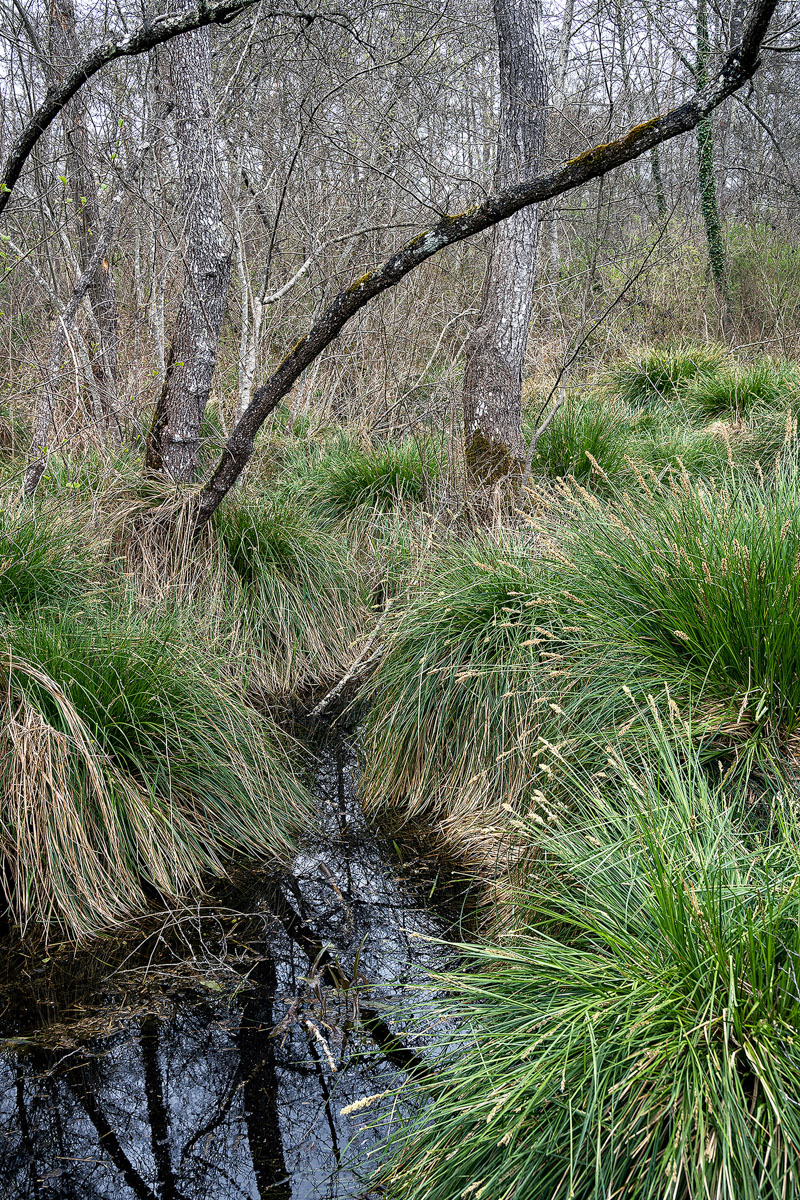 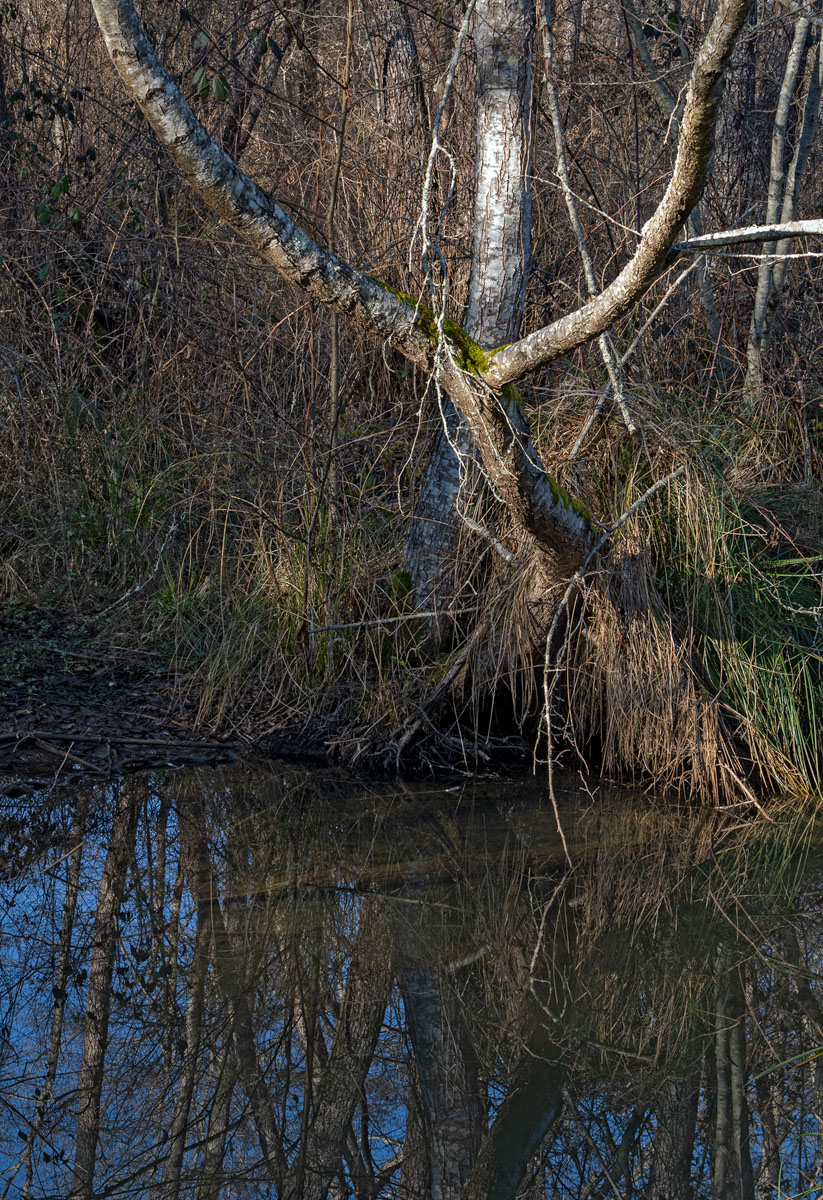 The Marais is not a location for dramatic landscapes but for those of a more intimate kind that capture the sense of enclosure and containment, and the quietness and stillness of an environment in which all the various features are inter-related. My purpose is to show this close-knit  inter-relationship between the forest, plants and the water.” 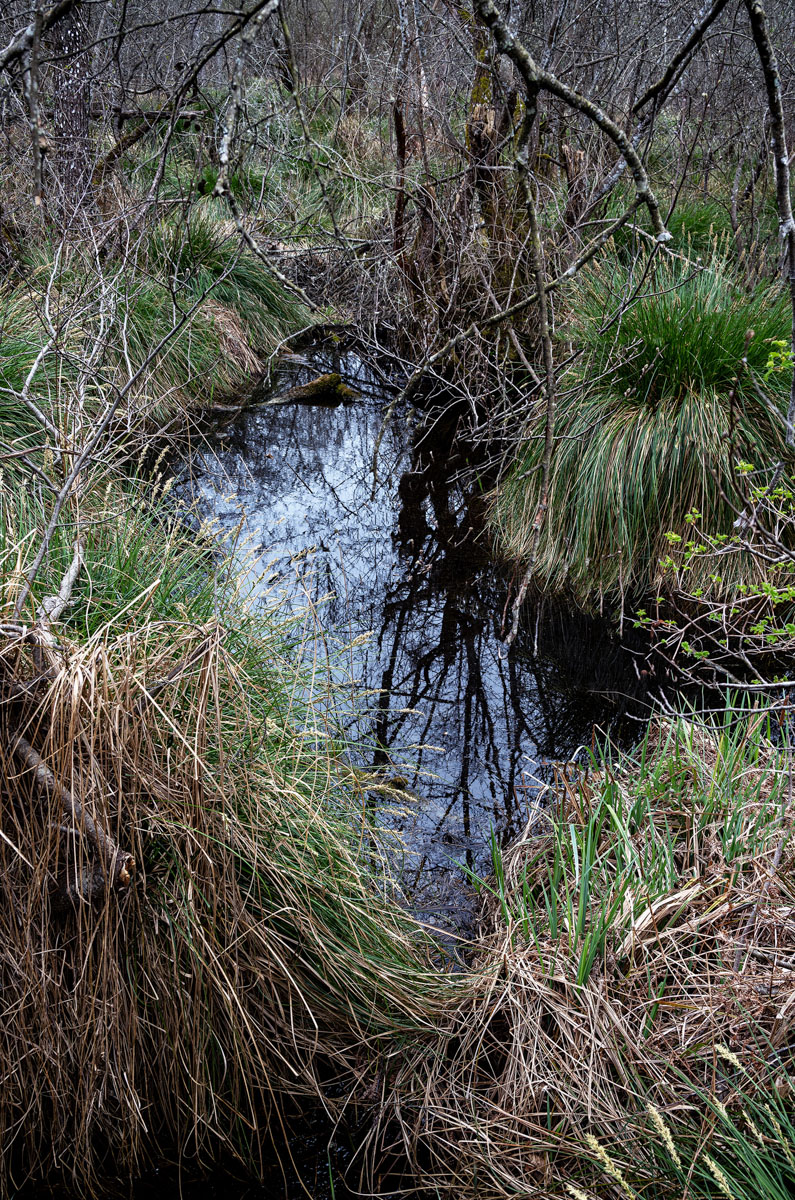 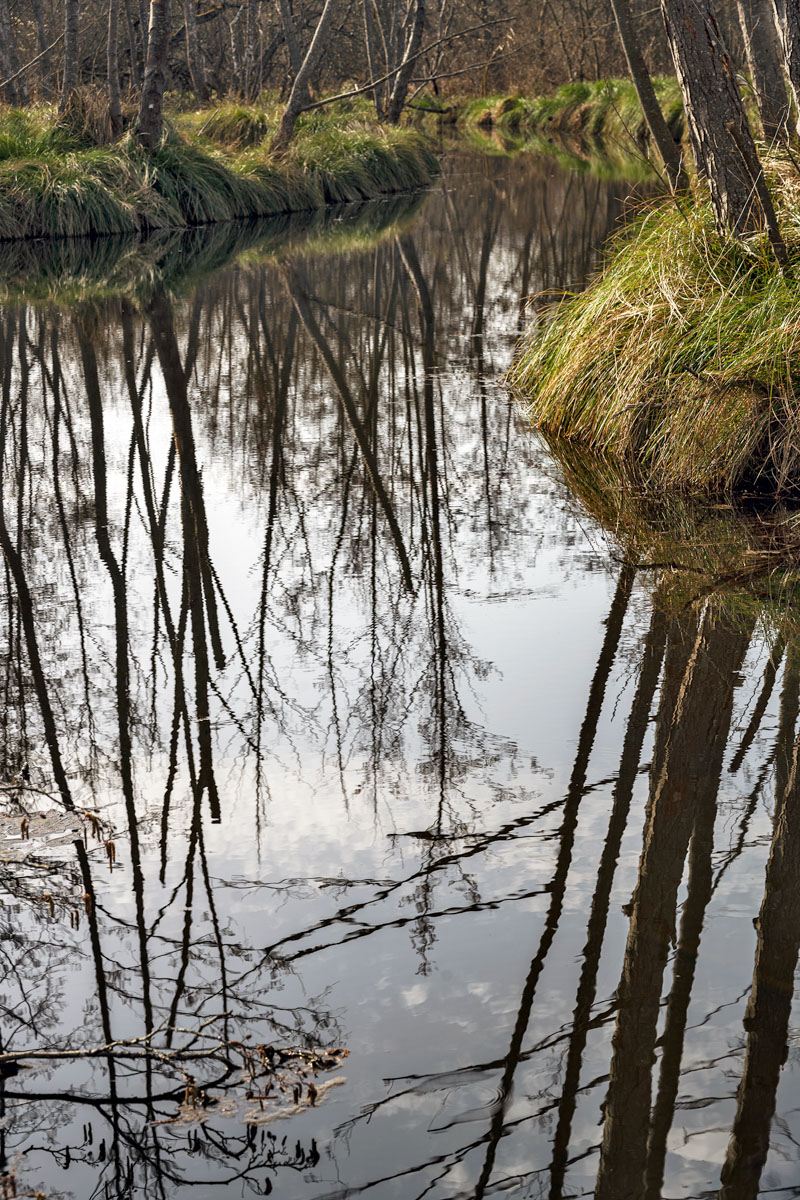 During  One2One Zoom meetings with advisors and the Benelux Chapter, the concept of  “intimate landscape” became a subject for discussion.  It appears to be somewhat unusual to present for assessment a group of photographs specifically in the intimate landscape genre. For reasons of required brevity this was something I could not discuss or define in the SOI. There were different opinions offered in trying to define, “intimate landscape,” and therefore the kind of photographs that might suitably represent it, so I could never be sure how the submission would be received or on what criteria it would be assessed. 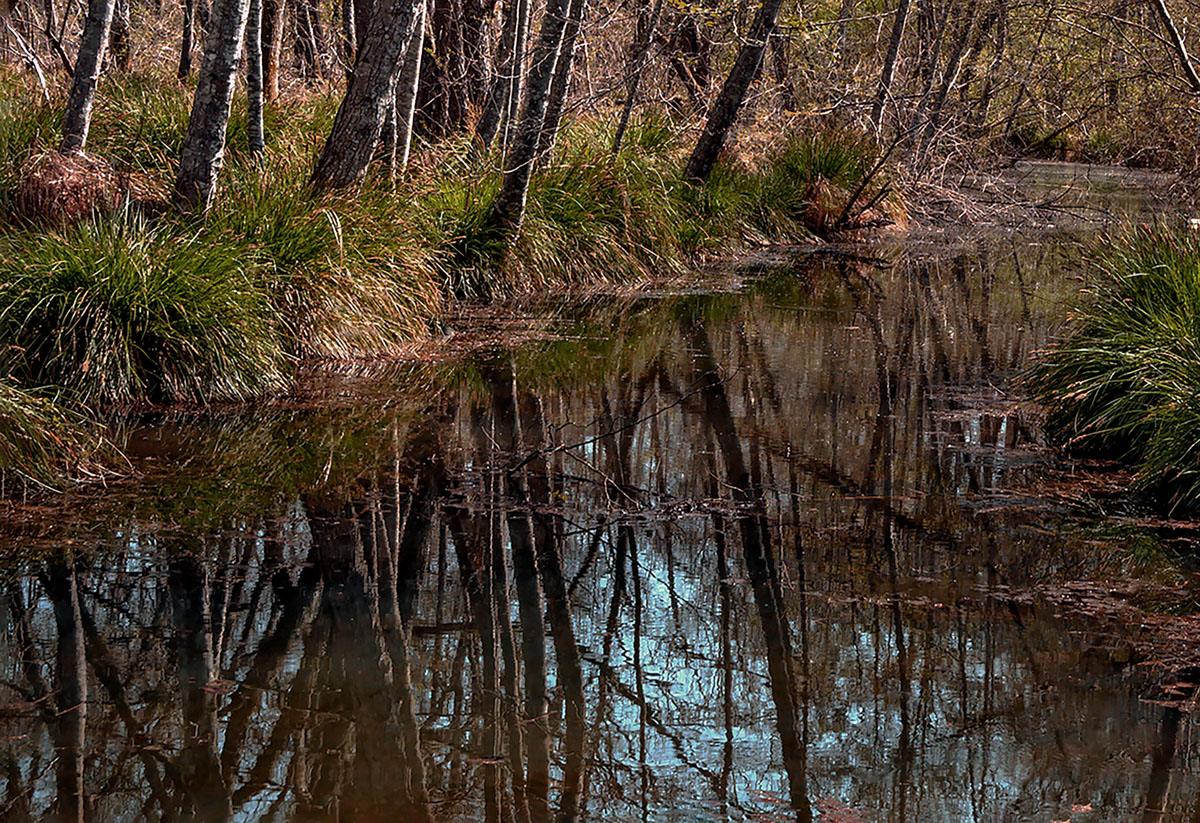 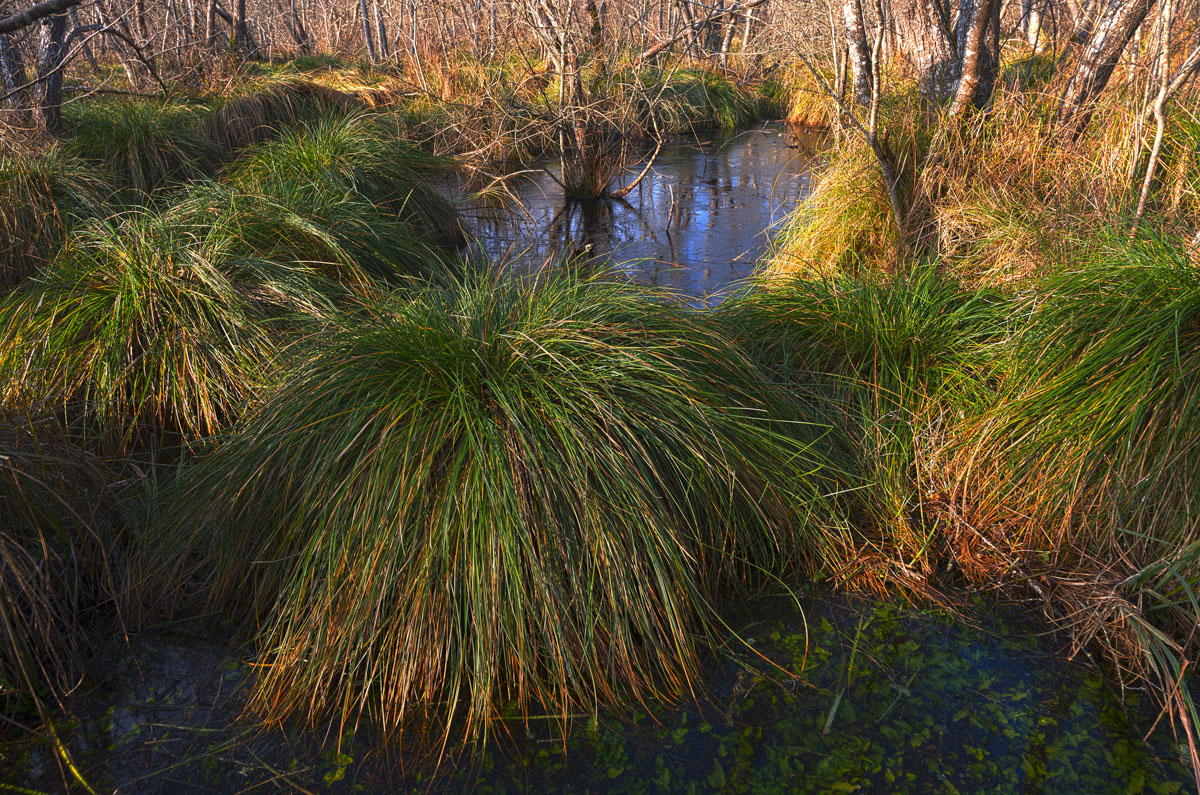 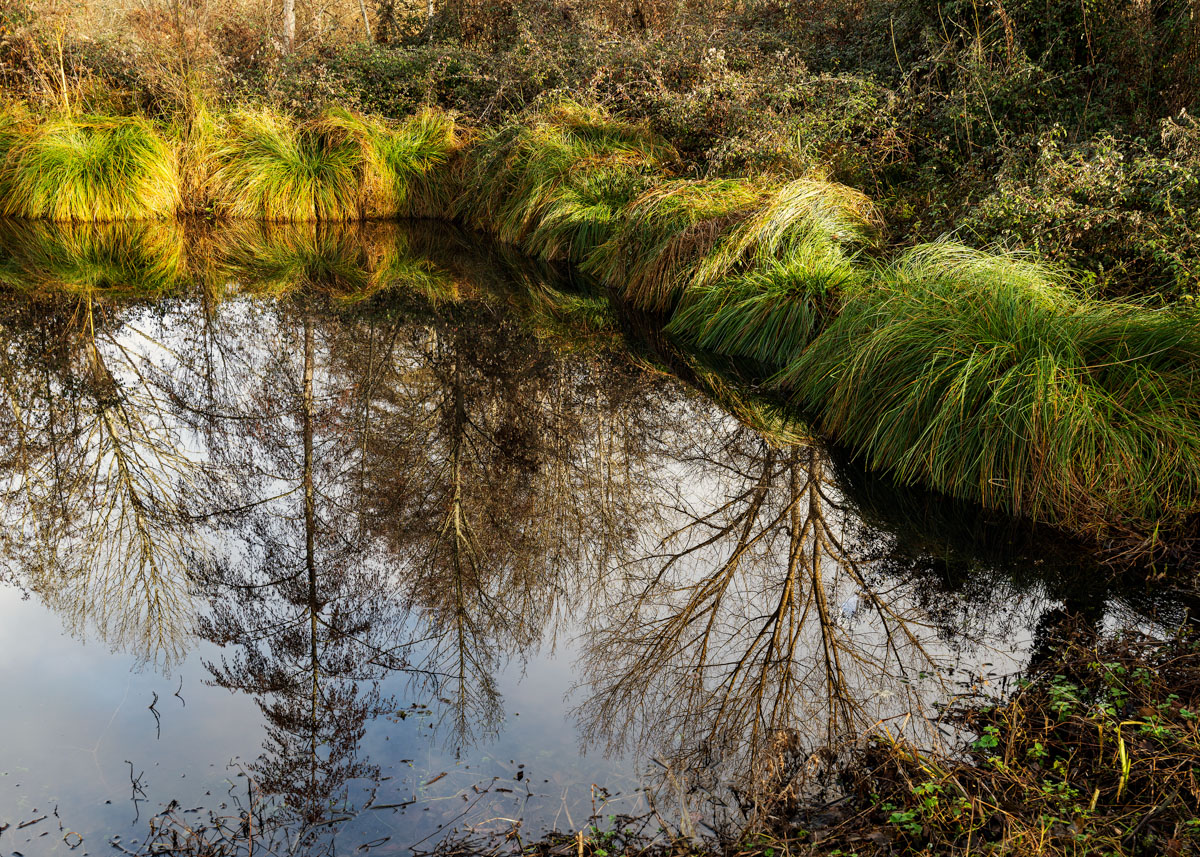 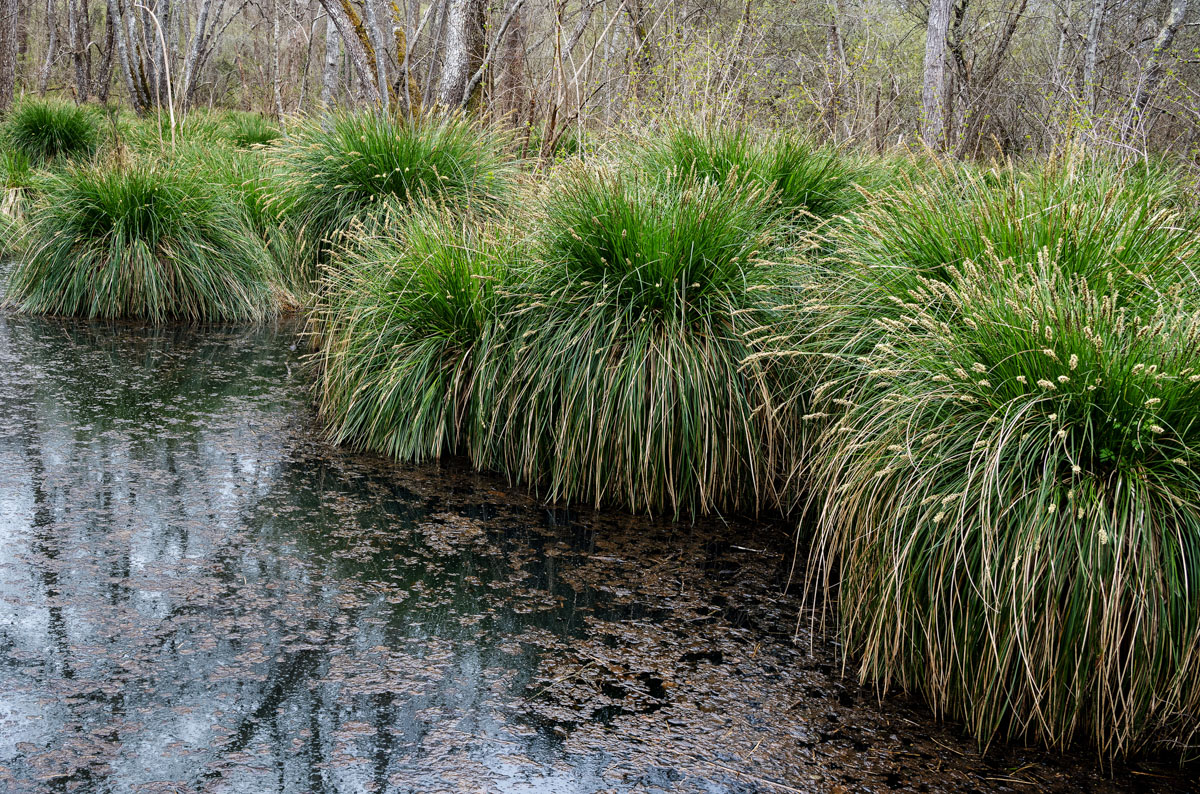 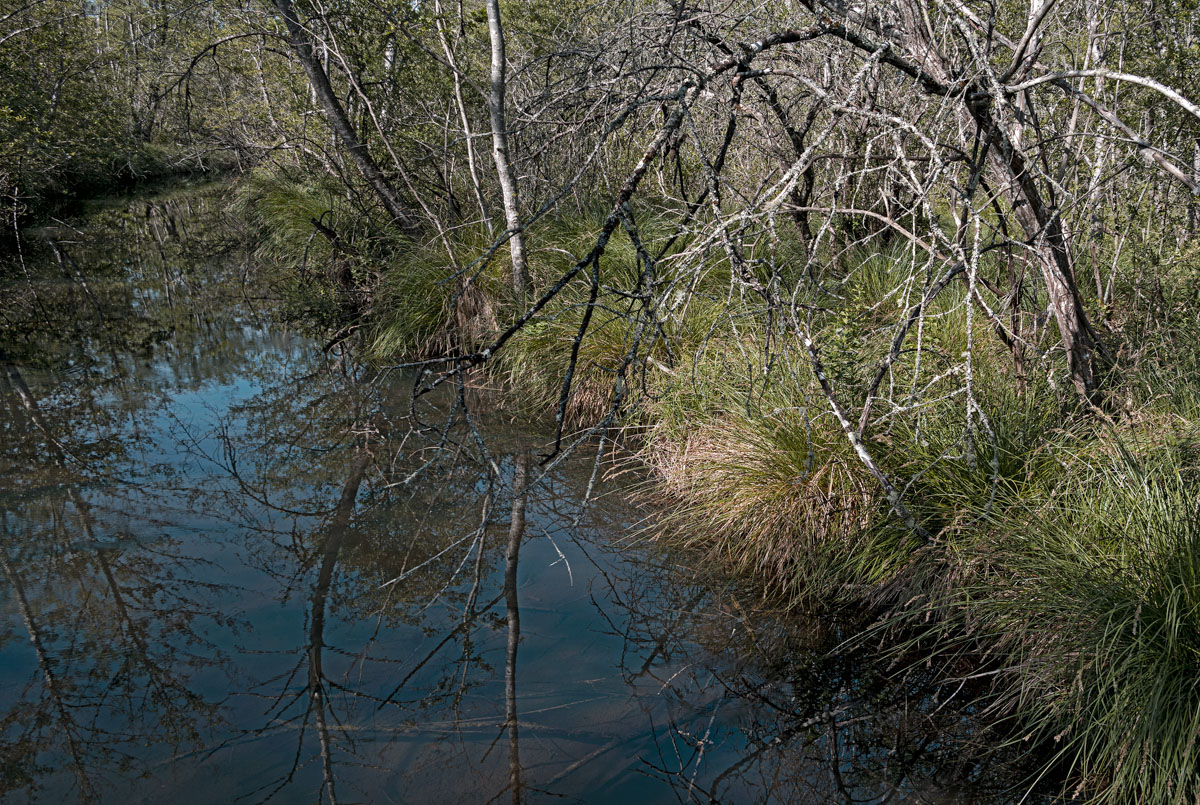 The term “intimate landscape,” was first used by Eliot Porter as the title for an exhibition of fifty-five of his photographs at The Metropolitan Museum of Art, New York, in 1979.

Porter’s exhibition set the parameters and standards for the genre to which many photographers have since contributed. The definition will always be subjective but in general terms an intimate landscape can be defined by both its subject and geography. That is, it sets out either to show a small detail of  the greater scene, or a close up of a specific subject that has caught the photographer’s eye because of its patterns, colour, shapes, textures etc. which most would walk past without noticing.

Discussing this with Joe Cornish, he wrote, “You might ask yourself whether the pictures include at least a little bit of geography in them, as opposed to none. So a spider’s web might be shot in the landscape, but if the picture is all web then I’d suggest natural history (or fine art say) rather than landscape. However, if the web is an interesting (but not dominant) element in a composition that also includes rocks and/or vegetation, and is more a suggestive/metaphoric element within the composition then it could certainly still be landscape.”

An intimate landscape is at the opposite extreme to the grand vistas and wider expanses which are favourite subjects for landscape photographers. However, it’s not simply a matter of deciding to photograph a small part of the greater view, but of finding an aspect of it that will make an equally compelling image. Such an image can tell its own story about the wider location, a series of images can tell a more detailed and complete story that concerns the mood, ambience and character of the location.

The fifteen images of the Marais I submitted set out to do that. Through an addition of intimate scenes I wanted the viewer to sense the character of the wetland, and to feel something of its personality and mood and what it is like to be there.

My grateful thanks to the following for their guidance and advice during One2Ones and other zoom meetings: Joe Cornish, Paul Mitchell, Tony Worobiec, Carol Olerud with members of the Benelux Sangha, Dennis Anguige and Noémie Phillipson.

This article was featured in the RPS Landscape Group's Newsletter, July 2022.