Your web browser is out of date. Update your browser for more security, speed and the best experience on this site.
Find out more
We use cookies and similar technologies to optimise your experience when using this site, to help us understand site usage, and to tailor our advertising on third party sites. Read about Cookies and view our Privacy Policy at the bottom of each page on our website at any time.
A JavaScript execution error has occurred somewhere on this page. The page may not function as intended. Try refreshing before continuing.
Published 02 January 2023
RPS Landscape Group

A promise had been made by the RPS, to see Autumn in Torridon and Wester Ross. Well, six intrepid explorers: Colin Balfour, Douglas Hay, myself, Par Campbell, Tony Ivan Hugh, & Vic Cotton) ably assisted by Mark Banks and Mark Reeves all appeared in Gairloch late on one Sunday in October to find out if the promise could be fulfilled. Mark1 was the brains behind this expedition and made it clear from the outset that the six of us had a mission to perform - to make ten images each that captured our impression of Torridon and Wester Ross. Mark2 had been persuaded to be the (unpaid) get-away car driver (gold coloured GT); it would become clear that he likes nothing more than the sight of a good sunrise while enveloped by the autumnal scent of hot clutch plates.

Mark Banks (the brains) had some very helpful 4 or 5 letter acronym tools to help remind us about the importance of process when capturing images in new locations; tools that, if followed, should prevent the disappointment of finding your best image is out of focus or has the dreaded power cables crossing one critical corner. In this spirit, I have invented another acronym to help organise this article - FLIP. So let’s start with the F.

FOOD: This was provided by the wondrous Shaun at the Myrtle Bank Hotel. He seemed to operate like our team butler making copious quantities of food appear at very regular intervals. His commanding presence made me feel I could have asked; “Shaun, could you organise the perfect sunrise tomorrow - and could we please have three majestic cloud wrapped peaks in the background”. I am certain his reply would have been; “Of course, what time would sir like this for?”.

On the first morning we enjoyed Shaun’s hospitality, followed by some useful insights about how we might achieve our mission from Mark1. Mark2 (the get-away driver) provided some motivation by sharing his inspirational FRPS panel images.

LOCATIONS: Before heading out, Shaun provided us with brown paper bags full of a variety of goodies to keep us going throughout the day. Mark1 and Mark2 drove us to the first location - the top of Loch Maree. Wisely, Mark1’s choice of location was both flat and close to the vehicles; learning to climb with heavy camera bags on our backs, counterbalanced by an equal weight of Shaun’s food would have to wait for another day. But even without moving very far, we still had an abundance of big views down the loch, intimate shoreline scenes and woodland landscapes to work with.

Another day - more food - and more Loch Maree; but as the 4th largest fresh water lake in the UK, that was not really a problem and certainly met V’s requirement to ‘be dropped into a target rich environment’.

Click on image titles to open in full screen view (opens to a new page).. 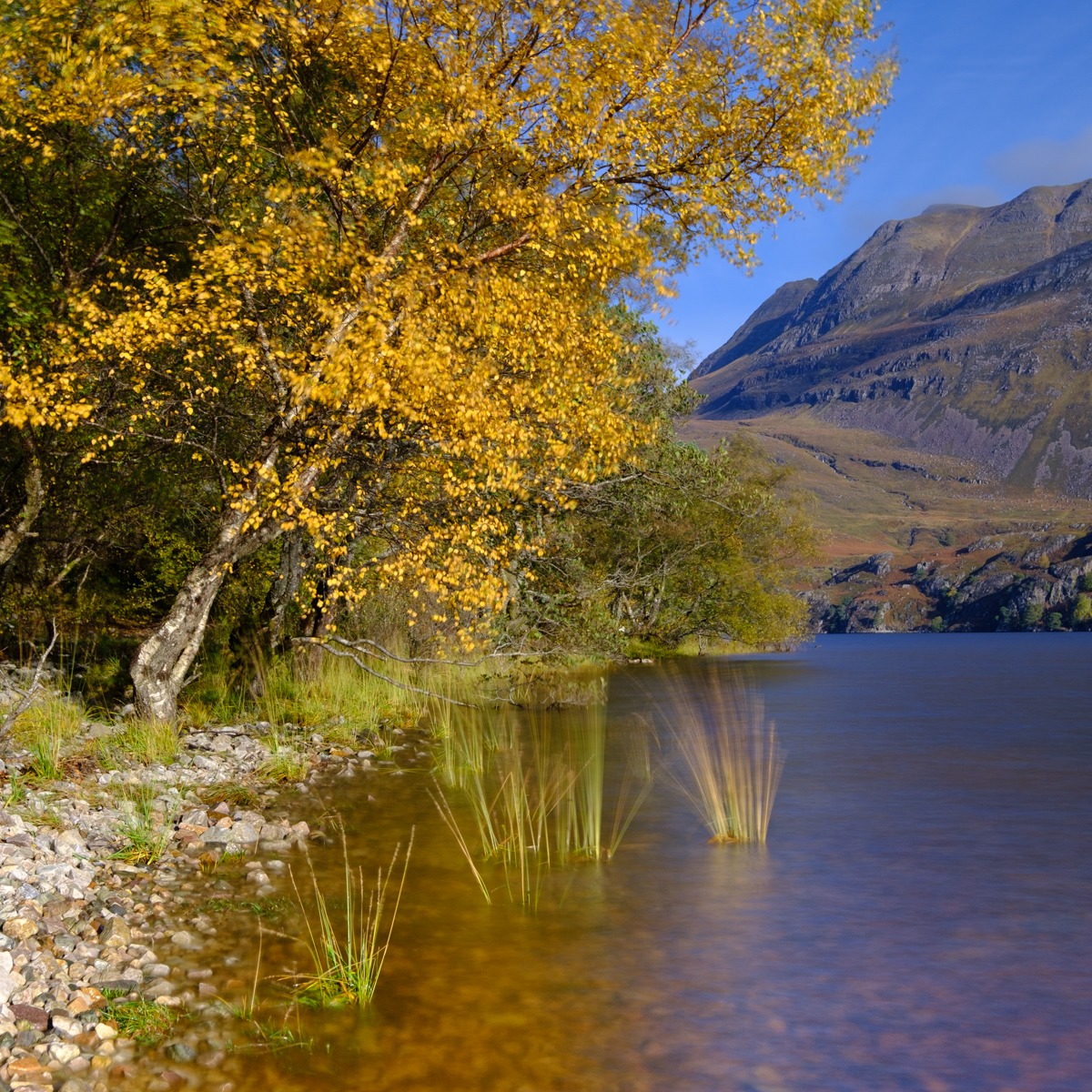 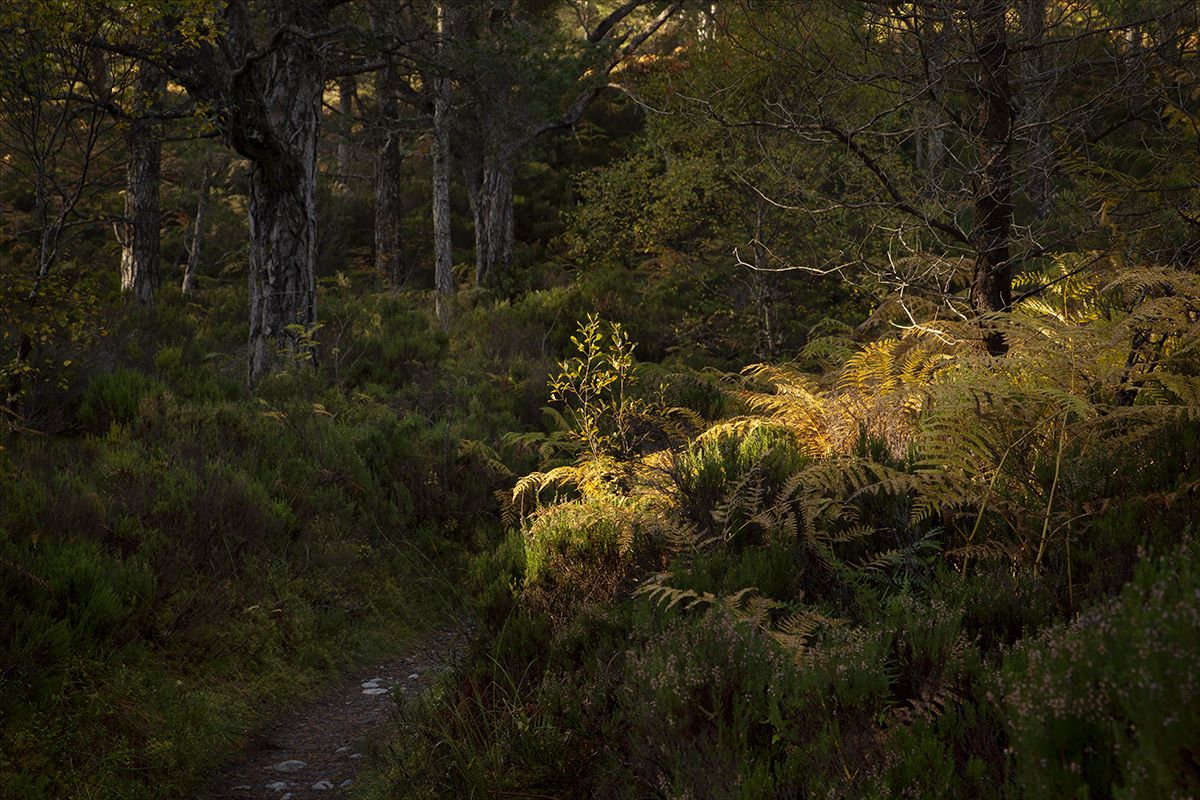 On the subject of targets; there were fungi of all sorts, everywhere. But if you wanted to capture an image you had to be quick, as we discovered that Mark2 has a secret fetish. He always carries two bags; one for camera gear and the other for fungi, but luckily I located a prize example just before he got to it.

I am not really a fan of mountain scenery - they always feel like ugly great lumps of greyness that terrorise the surrounding landscape. So why was I in Torridon, you might ask. Well, the images that appear on each persons SD Cards can reveal a very different views of the world.

IMAGES:  Dawn can produce some of the most spectacular results. So the next morning six sleepy photographers, Mark1 and Mark2 materialised at 6:30. We were whisked to an east facing beach overlooking loch Ewe. The dawn had broken cloud on the horizon so we did not witness the sunrise itself but benefited from a most spectacular cloud and light display which made the wait for breakfast seem well worth it. 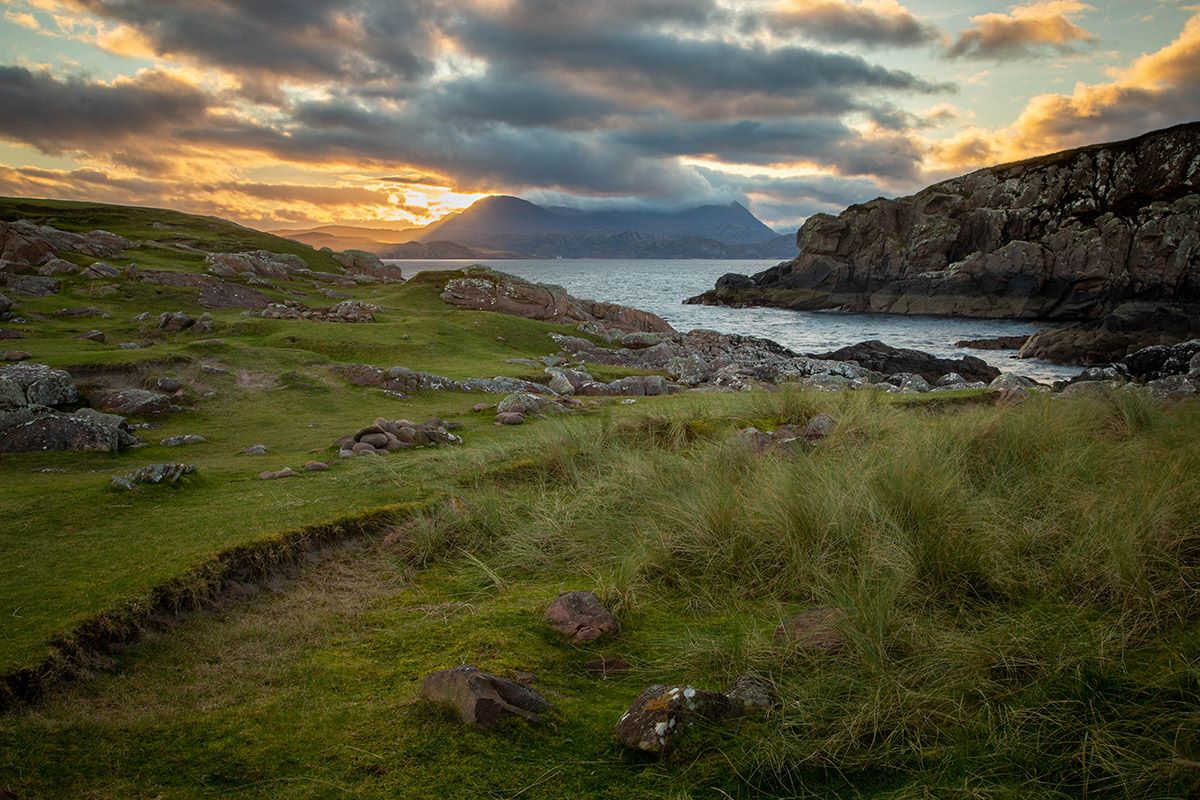 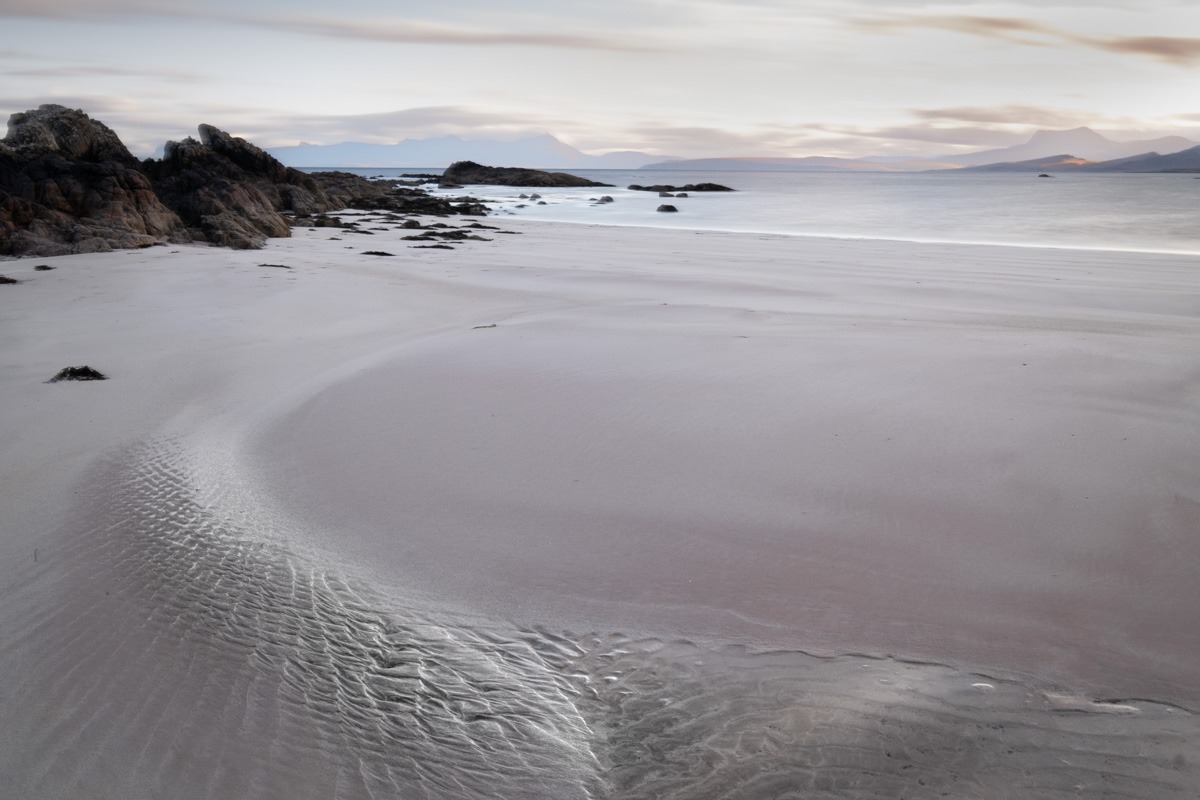 After an informative late morning session where we reviewed some images, we were taken to discover the delights of Upper Loch Torridon. For “delights” read more ugly great lumps of greyness - so more creativity would be required! But, this challenge was harder than usual as it was becoming clear that it was near impossible to frame a shot that did not include Mark2’s red jacket. He later went on to explain he wears red so it is easier for us to find, select and remove in post-processing. Is that a flawed argument? Answers on a postcard please. I suspect the real answer is, he knew exactly the right spot to position his tripod!

By Thursday morning Mark Banks was clearly under the influence of Mark Reeves’s magic mushrooms because he has organised an image fondling session based on his ‘album of 2021’. Gently rubbing his rusty image was a revelation. It had been printed on Hahnemuehle William Turner paper and brought the image spectacularly to life. The revelation for all of us was the critical importance of paper choice when making a print.

Dundonnel woodland provided an opportunity for putting some ICM training into practice with plenty of autumnal coloured beech trees. From there, our return journey passed Ardessie falls. 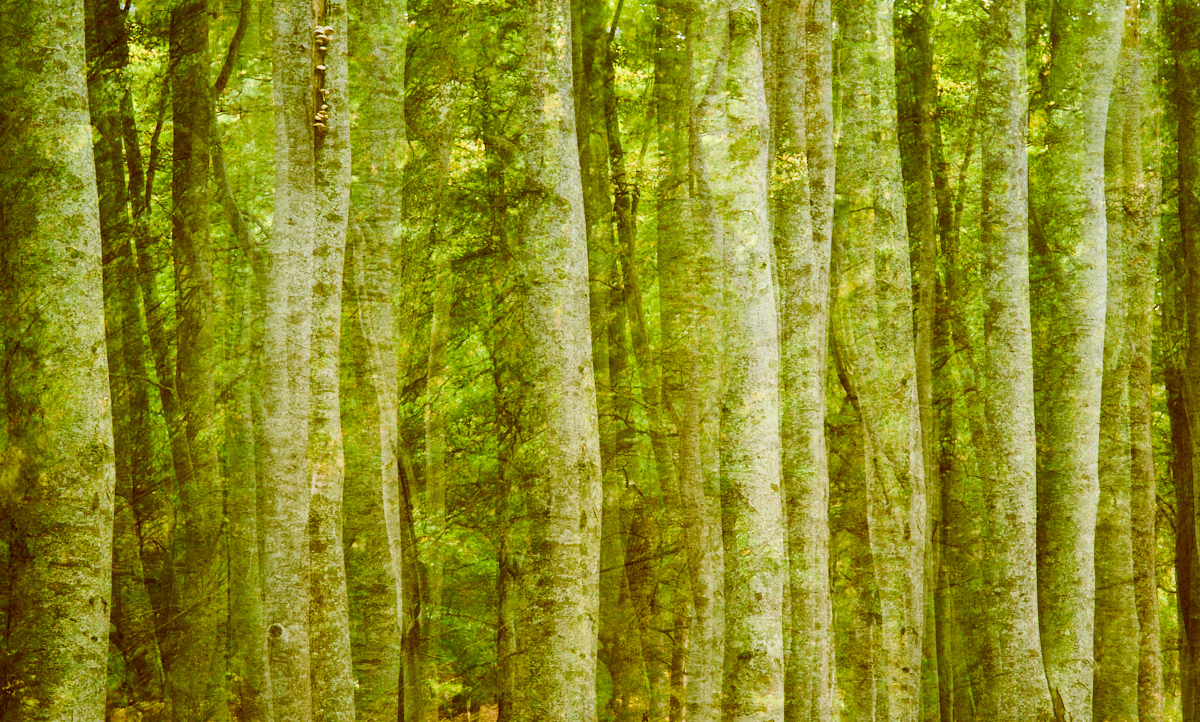 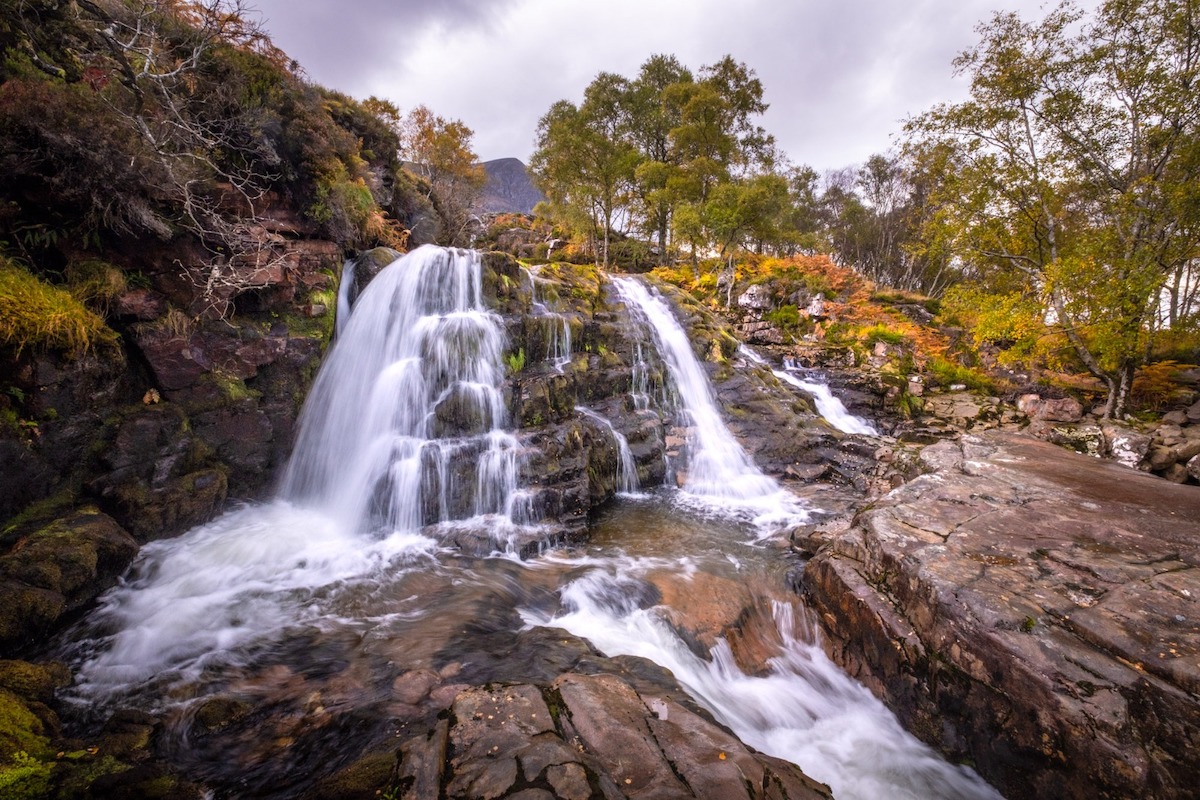 Douglas and Tony stayed at road level while the rest of us scrambled up the hillside to find further (upper) falls mixed with autumnal colours and cloud capped mountains beyond. It is well worth the climb if you are passing.

PEOPLE: the participants can make (or break) a workshop like this. Luckily in this case, because  the people were of a certain age, they remained entirely unfazed when the get-away driver returned to the hotel with ‘best of the 80s’ blaring out of the speakers. This (and the fumes from the clutch plates) appears to have caused Mark Reeves to think he was an events organiser for the Royal Phonographic Society - and so a music quiz materialised for the evening. This was not my thing as I usually can’t even remember the name of a film I saw the previous night but it proved fun after all. Pat whose presence was rarely noticed as she was usually hidden behind one of her tripod legs (it was very big),  became dangerously animated. This was probably triggered by Colin  who possessed an extraordinarily encyclopaedic knowledge of every piece of late 20th century music!

On the final morning Mark Banks spent a useful three hours messing with our RAW files. I found his approach to image processing really useful and it will definitely change my way of editing images going forward. At the end of this exercise there was a panel of twelve amazing images (two from each of us). I wonder if teams can apply for an LRPS?

Then it was off to the beach - Little Gruinard beach to be precise, which provided the opportunity for some long exposure shots as conditions were very calm.

Shaun had fixed a nice sunset for us on the last evening, so Colin, Jamie, Pat & Vic all ascended Creag Mhor to await our final treat. Mark Banks had explained how to photograph a perfect sunset - starburst off the last bit of the sun as it vanishes over the horizon - using f16ish. So having set this up perfectly - I was unpleasantly surprised when Mark Bank’s orange jacket appeared from behind a rock, iPhone in hand, in the centre of my image, somewhere between the 3rd and 4th bracketed exposure. This was slightly annoying as the sun only sets once per day! However the quality of the sunset was everything you could have asked for on our last evening. Six happy photographers returned to the cars ready for a wee dram back at the Myrtle Bank.

"What a really great bunch of people to have spent time with on this very educational workshop".

However the time we spent with Mark Banks and Mark Reeves in our viewfinders makes me conclude that they are hatching up a secret plan. Expect to see a new RPS workshop coming soon - ‘How to remove unexpected objects from your images’."