Your web browser is out of date. Update your browser for more security, speed and the best experience on this site.
Find out more
We use cookies and similar technologies to optimise your experience when using this site, to help us understand site usage, and to tailor our advertising on third party sites. Read about Cookies and view our Privacy Policy at the bottom of each page on our website at any time.
A JavaScript execution error has occurred somewhere on this page. The page may not function as intended. Try refreshing before continuing.
Published 30 November 2020
Sue Wright RPS Landscape Web Editor landscapeweb@rps.org

Am I ever going to take a decent photo again? That was the disturbing thought rattling around my head as my wife and I left our holiday cottage near Wast Water. I was reflecting on what had been a disappointing three weeks in the Lake District. At best, the autumn colour during our trip in October and November 2018 could be described as patchy. It had been particularly poor near our accommodation at Buttermere, Keswick and Wast Water. The colour had been impressive when we visited Coniston Water and Tarn Hows, but that was pretty much it. To make matters far worse, there had been very little frost, lots of plain skies and an abundance of hazy sunshine. I had put in a fair amount of graft for an out of shape old-ish bloke and barely had anything to show for it. In truth I was uncharacteristically disheartened by it all.

Fortunately, we still had a week left in the Lakes, based at Pooley Bridge at the north end of Ullswater. On the way there, we stopped at Keswick to pick up some food. I took the opportunity to pop into Stuart McGlennon’s tiny photographic gallery/shop, which a fellow photographer had recommended. It wasn’t too busy and as well as admiring the prints on display, I was able to have a long chat with Stuart, which rather boosted my flagging enthusiasm.

After we arrived at our holiday cottage, I made a short trip to check out a viewpoint over Ullswater. The weather was typical for this holiday, mild with very hazy sunshine and once again there were no keepers from the session.  When I returned to my car after sunset, I realised that the temperature had dropped substantially during the hour or so I had been out walking. There was no wind and the conditions were promising for a cloud inversion the next morning. Of course I had thought that many times before, only for the temperature to rise overnight or the wind to pick up.

Returning to our cottage I checked the weather forecast on a few websites, none of which were promising. But these forecasts hadn’t reflected the drop in temperature that I had witnessed and I reckoned that I might have a better insight into the micro-climate around Ullswater. I decided to go to Yew Crag for sunrise the next morning. I had been there once before and thought that it would be a good spot to observe a cloud inversion over Ullswater, should one occur. I cleaned my lenses and filters, laid out my clothes and went to bed early. 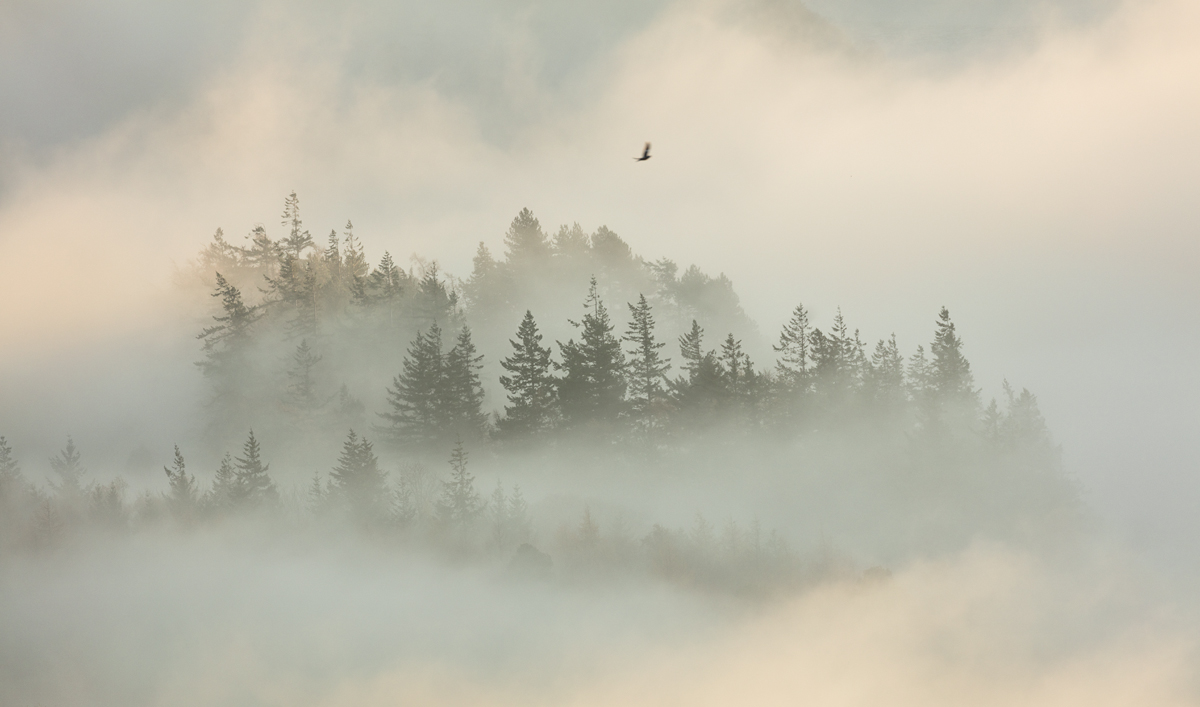 The next morning, I had a quick breakfast and headed out at about 05.45, slightly ahead of schedule. After driving a few miles through the darkness, I could just make out a blanket of mist ahead, suspended over Ullswater. I started to get a little bit excited. On reaching the car park near Aira Force, I changed into my walking boots, donned my head torch and headed off in anticipation.

I walked through the woods and onto the southern slopes of Green Hill. I climbed steadily, adjacent to a massive cloud inversion on my right. I had my usual kit with me: a Canon 5DSR with 16-35, 24-70 and 100-400mm zoom lenses, ND grads, a polarising filter and carbon fibre tripod. I walked steadily until I was in position at Yew Crag shortly after 07.00.

The mist formed a huge wall, completely obscuring the view over the lake. I would have to wait before the sun rose above the hills to the east and started to burn off the mist. I sat and ate my second breakfast of the day.

When I eventually started shooting, I used the full width of my 16-35 lens to get a composition. I set the aperture to my usual f11, small enough to produce a starburst effect around the sun and shot using different exposures. These images could be blended in Photoshop to control the high contrast scene. A while later and the mist started to clear in patches to the north-east. I isolated a group of trees using the long end of the 100-400 and took a series of images as the mist swirled around the trees. I shot another set when an obliging crow flew past.

When the mist started to lift and move more quickly, I kept looking around to see where the best photo opportunities arose. I noticed that the only tree to have retained its golden autumnal colour occasionally emerged out of the mist. I pressed the shutter whenever this happened, adding a polarising filter to enhance the colour.  The mist then started to clear rapidly in the distance and I needed a wider view.

To avoid wasting time changing the lens, which would risk missing the shot, I zoomed out and took a panorama of two vertical shots to squeeze in the desired composition. The mist soon disappeared altogether to reveal clear skies. The photo opportunities had evaporated along with the mist, or so I thought. I started to walk back towards the car park, pausing only to admire the classic view towards Glenridding, as the first Ullswater Steamer of the day made its way up the lake. I took no photos of this scene today though. As I reached the woods around Aira Force, I decided to make a short detour to see the waterfall, but again I took no photos in what was now quite harsh light.

I hadn’t walked much further when I noticed a big, bald oak tree set against a wonderful background. I don’t do much black and white work, but I figured that even I would be able to make these limited tones work in mono. I took a three shot horizontal panorama with the big lens.

I returned to Pooley Bridge, very glad that I had persevered in spite of my photographic dry patch of the previous three weeks. With some good fortune, I had come away with a bunch of images that I thought were, by my own modest standards, not too shabby at all.