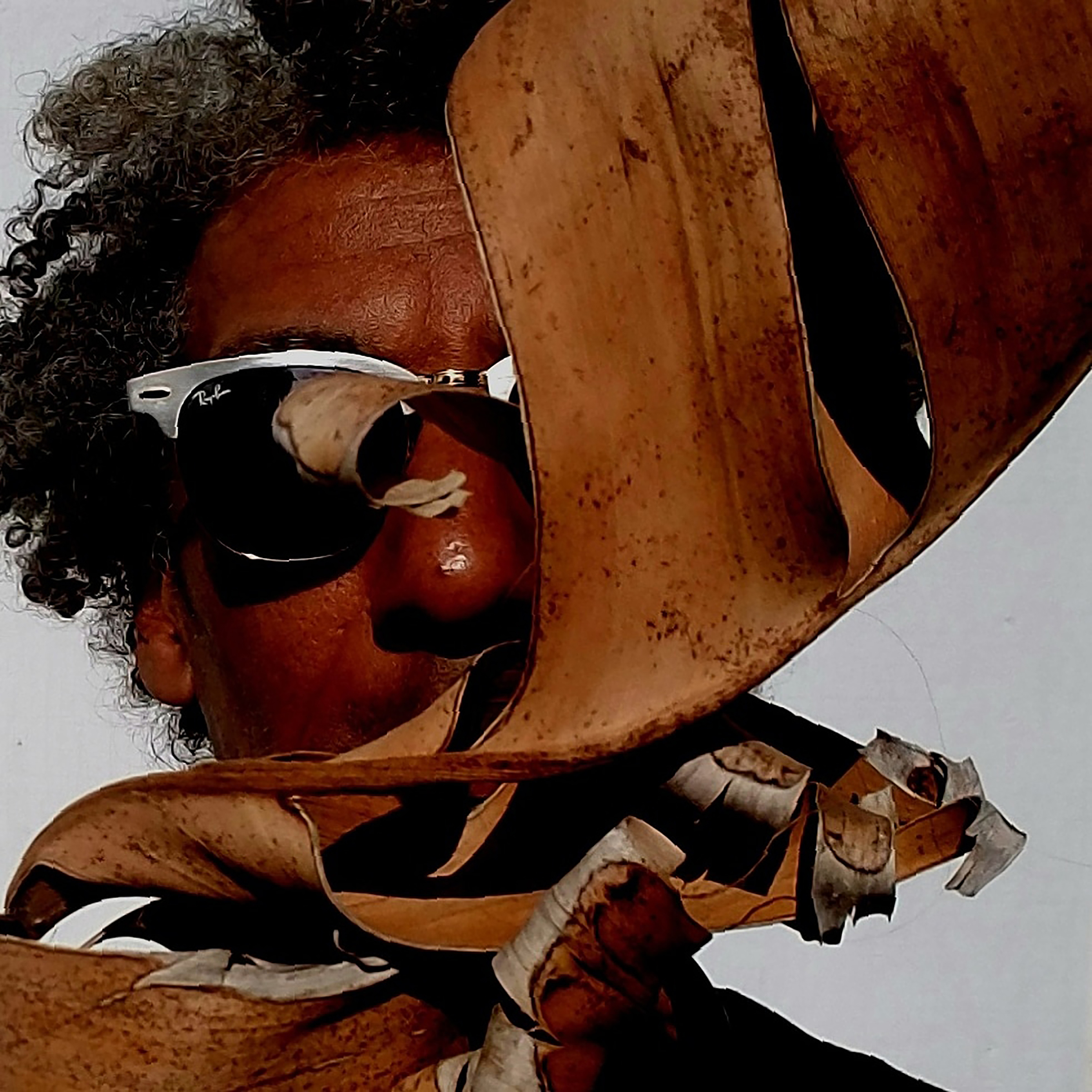 Originally from the South Bronx, 'Djinn' nee Carl Lewis’ career as an artist began as one of the last boarding class of the prestigious Cathedral of St. John the Divine Choir School in Manhattan. As a member of this internationally renowned all-male choir performances at The Philharmonic, Carnegie Hall and Radio City Music Hall were the norm. After graduation Carl auditioned and made the choir of Little Church around the Corner, known as The Actors' Church, and performed in numerous Broadway shows and operas. during the next few years,
Sensing the demise of his maternal grandmother he enlisted in the USAF.  This took him away from singing delivering him into the visual arts world through the gift of a camera from his younger brother.
This phenomenal gift was the start of a new path with a new view on the entire world. The youngest supervisor of a USAF Pathology Laboratory, he gained skills photographing anatomical specimens and the microphotography of specially stained cell constituents. After mustering out he studied with Mirle Freel Jr. at the Tucson Museum of Art School with the intent to became an 'imager'. While living in Arizona, he was offered the opportunity to begin learning the craft of jewelry design and began working with third generation silver and goldsmith, Randy Kavarik. Randy was the original designer of championship belts for the wrestlers. This was the beginning of a path that led to a number of mentorships in other media, furniture and surface treatments with Jose Marmol, African textiles and sculpture with kente designer and collector Kofi Owusu Bempah. This resulted in his diverse interests , e.g. Native American 'dead pawn', Oriental tribal rugs, African textiles, indigenous iconography, color theory and pattern recognition; not to mention film production, copyright, patent and trademark infringement.
A consultant to creatives and non-profits for the last four decades, 'forward thinker' Djinn, began his business career in 1985 as a member of NFL Hall of Famer Rayfield Wright's, "Wright and Associates". He was responsible for analyzing creative projects and executing currency transactions. When the firm dissolved in 1987, Carl reentered the 'creative' world where he joined his talents in the business world. It at this time he realized that he had been a professional photographer for almost ten years. Based in Dallas Texas, he co-founded the Crown Family Unity Programs, designed and executed programs for youth-at-risk nationally funded programs by federal, city, and state resources . He oversaw and was intimately involved in all aspects of CROFA (Crown Family Unity), from grant writing, to vendor, and sponsor interaction, to accounting. The Programs garnered recognition from the U.S. Department of Health, Education and Welfare. Mr. Lewis has been involved in a broad range of industries and business models. This has resulted in a unique outlook on life and business.
In the '80s Carl's work was part of Black Star Photo Agency, one of the world's top five photography agencies, and his Hartford photography studio produced work for United Technologies and Aetna. He was a member of a group of inventors, designers, scientists and artists conceptualizing solutions to issues such as clean and available water, sustainable power generation and energy efficient lighting.
During the '90s he spent 5 years as a member of Dallas' Public Art Committees and the Texas Commission on the Arts' Arts and Education Roster, and two years on Plano's (TX). In 1995 he assisted Humphreys Fellow and Master Kente Designer and Weaver, Ghanaian environmental ecologist Kofi Owosu Bempah, in the design of a Zip Code and Identity Card Program, for the country of  Ghana, to be presented to the World Bank. This prompted a 1996 trip to Ghana with focused to food preservation technology.
His continued interest in indigenous cultural products prompted travel to Jamaica in '96 to assist Jamaica's Hardanga women in turning their cultural heritage of 'tatting' lace into an international product. From 1997 to 2002 he was the mentee and marketer for fine arts furniture designer Jose Marmol's studio, Marmol Designs.  One of six artists selected as part of a 'Curriculum Guide for the Smithsonian's African American Museum Project', Carl's works are in the permanent collections of the Brooklyn, Amon Carter, and Museum of Fine Art Houston and referenced in Deb Willis' 'Reflections in Black'.
Moving to California in 2003 he has served on the Board of the Bay Area Blues Society, and currently is Treasurer of educator/composer/performer/producer Marcia Migét's Bay Area Miraflores Music Academié. With 2017 his fortieth year as a photographer and designer Carl's career encompasses Dov SS Siemens' Hollywood Film Institute, inclusion in the Smithsonian Institution's National African American Museum of History and Culture, and being documented as the only photographer to 'capture' 'live' laser imagery with an analog camera and slow film.
From narratives and allegories to faces and flora, the various facets of his work reveal his four decade 'walkabout', and universe of personalities. Djinn's peers, friends and associates span all disciplines of art and design, from visual arts, music and theater, e.g. Albert Popwell, Gordon Parks, Dr. Bruce Lipton, Kenn Gartner and many many more.
Currently a member of the Royal Photographic Society and working on a project with the Tejas Cherokee tribe, Carl's slugline is, “If you're waiting on me, you're backing up.”

Visually I've always been fascinated by light, colors and patterns. It may have started with my observation of sunlight through the stained glass creating shifting mosaic patterns on the granite floor of the Cathedral of St. John the Divine.
As a 10 year old growing up traveling between the Close of the Cathedral and Fort Apache (the South Bronx) I saw the steel girders of the subway and highrise buildings as tree roots and limbs incorporated into the reflections of a mottled sky.

An auto-didactic visual artist my creative life began as a classically-trained vocalist and member of the last boarding class of one of the most prestigious male choirs in the world. It wasn't until I began photographing anatomical specimens, photomicrographing cells and their constituents, that the connection to the colors and patterns from my childhood occurred.
The initial photographic impetus was the works of Albert Renger-Patzch, the Bauhaus and de Stijl. The artists from these groups fueled my direction(s). My experimentation into process-driven and -manipulated photographs is a direct result of Man Ray and my military training.

The genesis of the abstract visual work began as the relationship of organic form(s) to the technology that created them. From automobiles to architecture I sought to show the reflection/refraction of natural composition. I've always felt that scenes 'talk to me', I'm just trying to translate.

Over the last 3 decades my imagery has evolved to incorporate my research into sacred geometry, Pythagoras, the effects of colors, my love of cartoons, esoteric icons and references from numerous cultures. These disparate elements have been woven into a coherent whole.

The inclusion of surface treatments like chigiri-e, goldleafing or eggshell into the 2D photo-images creates a 'high touch' element in a world that currently lauds 'high tech' in the capture, production, exhibition and distribution process.

I liken my body of work to a precious stone with facets of my oeuvre ranging from intimate slices behind the curtains to powerful moments on life's stage, literal urban tableaus to allegorical vignettes, and abstract, surreal and gestural figuratives to new media digital constructs.