Your web browser is out of date. Update your browser for more security, speed and the best experience on this site.
Find out more
We use cookies and similar technologies to optimise your experience when using this site, to help us understand site usage, and to tailor our advertising on third party sites. Read about Cookies and view our Privacy Policy at the bottom of each page on our website at any time.
A JavaScript execution error has occurred somewhere on this page. The page may not function as intended. Try refreshing before continuing.
Published 26 January 2020

Four Holocaust survivors, alongside their children and grandchildren, feature in moving new photographs which have been released to mark Holocaust Memorial Day on 27 January.

The portraits will be part of a new exhibition which will open later this year, bringing together 75 powerful images of survivors and their family members to mark 75 years since the end of the Holocaust.

The project is a collaboration between the Holocaust Memorial Day Trust, Jewish News and the Royal Photographic Society (RPS). The photographers, all from the RPS, include the RPS’s Patron, Her Royal Highness The Duchess of Cambridge, RPS Honorary Fellow Jillian Edelstein and member Frederic Aranda.

It aims to honour the victims of the Holocaust and to celebrate the full lives that survivors have built in the UK. Each of the portraits depicts the special connection between a survivor and younger generations of their family, who over the coming years will carry the legacy of their grandparents. However, the project also aims to inspire people across the UK to consider their own responsibility to remember and share the stories of those who endured persecution at the hands of the Nazis.

Survivors featuring in the four images released today are:

Steven Frank BEM, aged 84, originally from Amsterdam, who survived multiple concentration camps as a child. He is pictured alongside his granddaughters Maggie and Trixie Fleet, aged 15 and 13. Their photograph was taken by The Duchess of Cambridge. 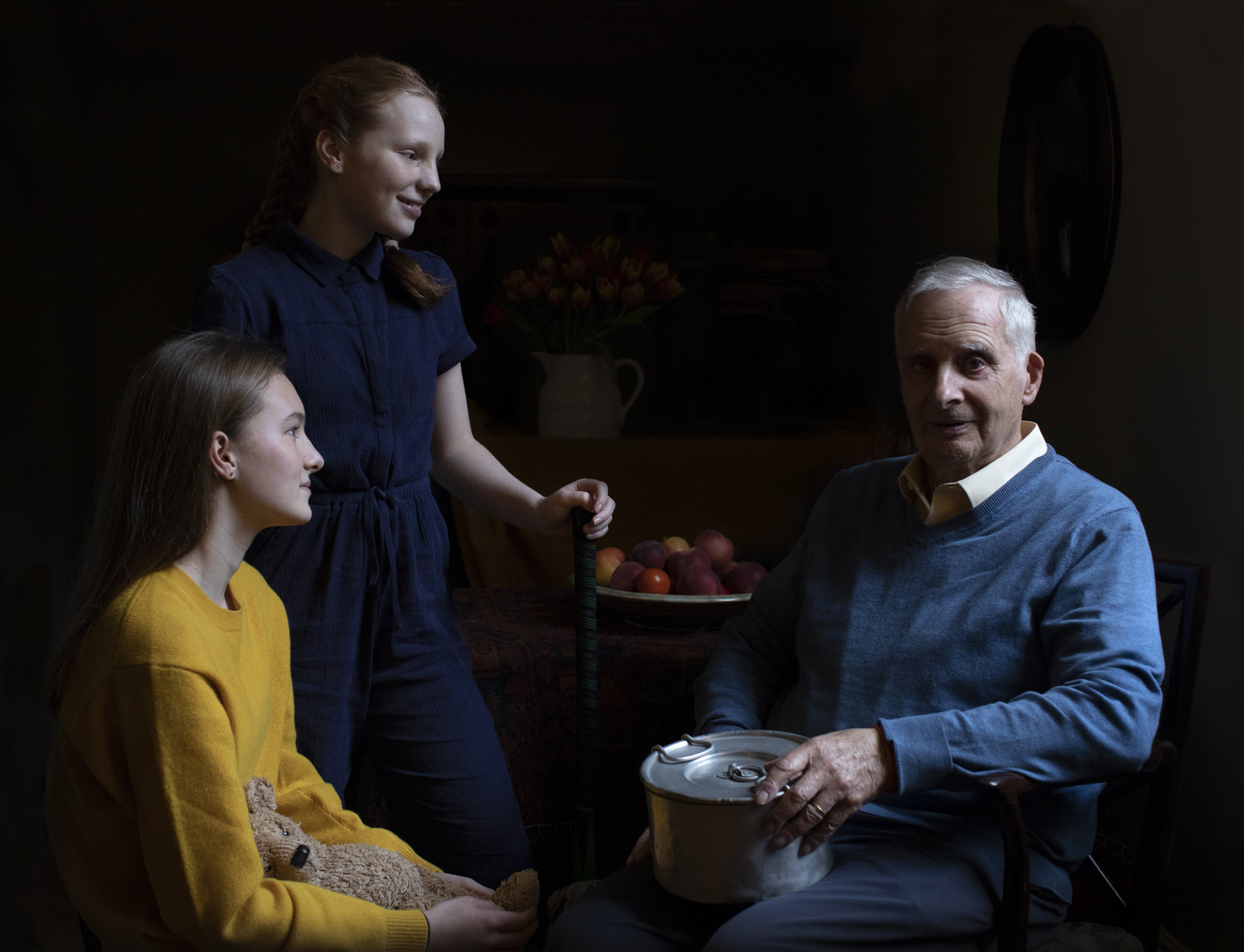 Image: Steven Frank BEM by The Duchess of Cambridge

Speaking about the project, Steven Frank BEM said: ‘I would hope that the people who look at these pictures not only look at the beauty of the photography, but they will also think of the people behind the photos and their families that they lost in the Holocaust’.

His granddaughter Trixie said: ‘It was amazing, The Duchess of Cambridge was really interested in our family and in Opa’s story, and the items we brought with us.’ Her sister Maggie said ‘I think it helped put into perspective that he’s just our Opa – he’s our grandpa as well as a Holocaust survivor. It’s important to tell the story so it doesn’t happen again.’

Yvonne Bernstein, originally from Germany, who was a hidden child in France throughout most of the Holocaust. She is pictured with her granddaughter Chloe Wright, aged 11. Their photograph was taken by The Duchess of Cambridge.

Image: Yvonne Bernstein by The Duchess of Cambridge

Joan Salter MBE aged 79, who fled the Nazis as a young child. She is photographed with her husband Martin and her daughter Shelley. Her photo was taken by Frederic Aranda.

Joan Salter MBE said ‘When I give my talks I show family photos, because I think it’s so important for them to see us as human beings, especially if they have just seen images of people in camps. I think the fact that the exhibition will include so many different experiences is so important – it will give a much broader idea of what it was like during the Holocaust rather than just hearing from one survivor’.

John Hajdu MBE, aged 82, who survived the Budapest Ghetto. He was photographed with his grandson Zac, aged 4. His photo was taken by Jillian Edelstein HonFRPS. 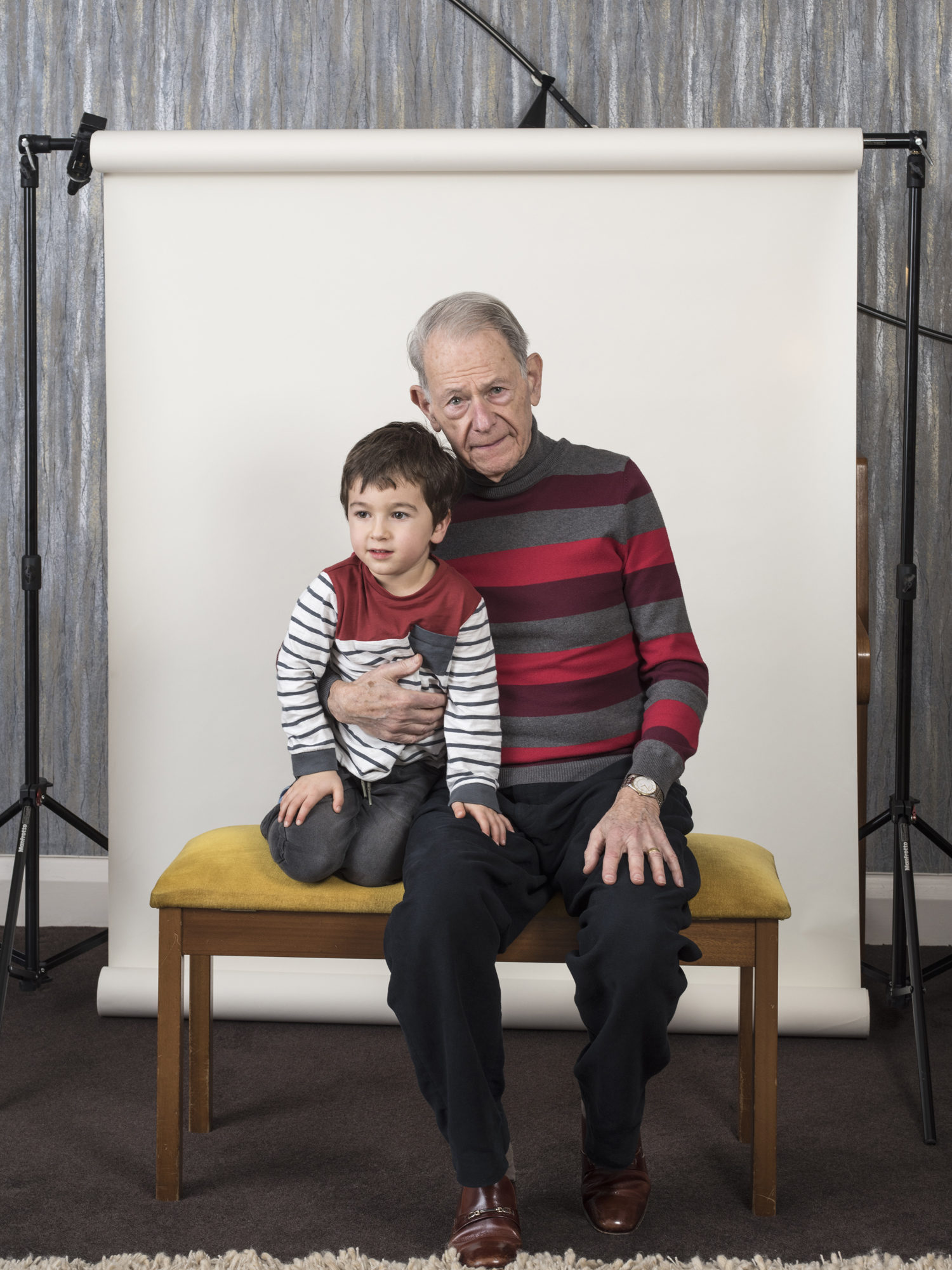 Olivia Marks-Woldman, Chief Executive of the Holocaust Memorial Day Trust, said of the project: ‘We are so pleased to be part of this project, as people from across the UK come together to mark Holocaust Memorial Day. The exhibition will be a fitting way to mark 75 years since the world was left scarred by the Holocaust. The survivors featured in these portraits all have very different stories, but each of their lives has been fundamentally changed by the trauma and loss they experienced. What connects these individuals is that, after systematic persecution, they all made the UK their home and the country has been enriched by them and their families.

‘Today, it is our collective responsibility to share the stories of those who survived, and remember the many individuals who were murdered.’

Justin Cohen, News Editor and Co-Publisher of Jewish News, said: ‘Each of these striking photographs remind us of the strength of so many survivors in building new lives and families after coming face to face with evil, but also of the millions who were murdered and the many more millions of children and grandchildren who were never even born.

‘With fewer and fewer survivors with us to relay their experiences the work of The Duchess and the other photographers will help ensure the truth is never forgotten, and its lessons for fighting hate today are brought to the fore.’

Dr Alan Hodgson HonFRPS, President of the Royal Photographic Society said: ‘The power of photography to document and give insight is evident in the photographs released today. These portraits provide a direct connection to those who were witnesses to the horrors perpetrated by the Nazi regime and, crucially, bring in their children and grandchildren who will be so important in ensuring that their stories and experiences remain relevant and real to contemporary society.’

Speaking about the project, Royal Photographic Society Patron, The Duchess of Cambridge said: ‘The harrowing atrocities of the Holocaust, which were caused by the most unthinkable evil, will forever lay heavy in our hearts.  Yet it is so often through the most unimaginable adversity that the most remarkable people flourish.

Despite unbelievable trauma at the start of their lives, Yvonne Bernstein and Steven Frank are two of the most life-affirming people that I have had the privilege to meet.  They look back on their experiences with sadness but also with gratitude that they were some of the lucky few to make it through.  Their stories will stay with me forever. Whilst I have been lucky enough to meet two of the now very few survivors, I recognise not everyone in the future will be able to hear these stories first hand. It is vital that their memories are preserved and passed on to future generations, so that what they went through will never be forgotten.

One of the most moving accounts I read as a young girl was ‘The Diary of Anne Frank’ which tells a very personal reflection of life under Nazi occupation from a child’s perspective. Her sensitive and intimate interpretation of the horrors of the time was one of the underlying inspirations behind the images.

I wanted to make the portraits deeply personal to Yvonne and Steven – a celebration of family and the life that they have built since they both arrived in Britain in the 1940s. The families brought items of personal significance with them which are included in the photographs.

It was a true honour to have been asked to participate in this project and I hope in some way Yvonne and Steven’s memories will be kept alive as they pass the baton to the next generation.’

Frederic Aranda, who photographed Joan Salter and her family, said: ‘It was a humbling experience to meet and photograph Joan and this reinforced the feeling that the Holocaust happened relatively recently. My photographic approach is positive and optimistic: photographing her at home with her lovely family testifies to the life that she was able to build after the Holocaust. I wanted the picture to be a celebration of her life without forgetting what came before.’

Jillian Edelstein HonFRPS commented: ‘How do you survive having your humanity stripped away in a ghetto, a concentration camp, witness the murder of your family members, be reduced to an inked number in your skin, and still remain a creature of curiosity, generosity, kindness, humour, wit, intelligence and dignity. It almost beggars belief - but that is what I saw, and I hope managed to capture, in the eyes, the being and the spirit of my extraordinary sitters. A palpable hunger for the life that was almost stolen away from them.’

Information about the exhibition which will be shown in London and at the Royal Photographic Society's gallery in Bristol, before it tours, will be available shortly. For enquiries about hosting the exhibition in the UK or abroad please email here.