An enthusiastic group of photographers gathered in Norwich Cathedral on October 11th, to explore the city under the guidance of Robin Myerscough.

The Norwich and District Photographic Society were holding their 106th Annual Exhibition in the Cathedral Hostry where we gathered. The many prints on display were excellent, and there was time to inspect and admire them, introduce ourselves, and talk with the friendly stewards present from the Society.

After refreshments and a quick briefing, where Robin mentioned that if anyone wanted a theme for photographs he suggested “Ancient and Modern”, we set off on the first of our two routes that day. Robin had put a lot of thought into what photographers might enjoy, and he also gave us fascinating historical details and pointed out good views and viewpoints as we progressed.

The group, some Creative Eye members and some from local Camera Clubs, found much of interest as we passed along Tombland and up the charming cobbled street of Elm Hill. There was time for a brief look at the river before heading to Norwich Market and nearby The Forum; a stunning modern building with great opportunities for capturing many styles of photograph.

After returning to the Cathedral for lunch, Robin took us on a second route, this time heading away from the city centre and exploring along the River Wensum. After passing the modern Jarold Bridge we enjoyed the lovely Riverside Park and the quixotically named artillery tower “Cow Tower”.

Further along, Robin related some of the history of Bishop’s Bridge and why the Lollard’s Pit Pub is so called, and we walked on towards more modern sights including the singular and captivating Rose Lane Car Park (yes, really!) and Baltic Wharf where the Photowalk ended. Everyone who came along said how much they had enjoyed the day, and all thanked Robin for the time, thought and energy he had put into the planning and execution. And I believe the Creative Eye Group may have recruited some new members as a result … Fantastic!

Selected images from the day, with comments from the walk's leader, Robin Myerscough 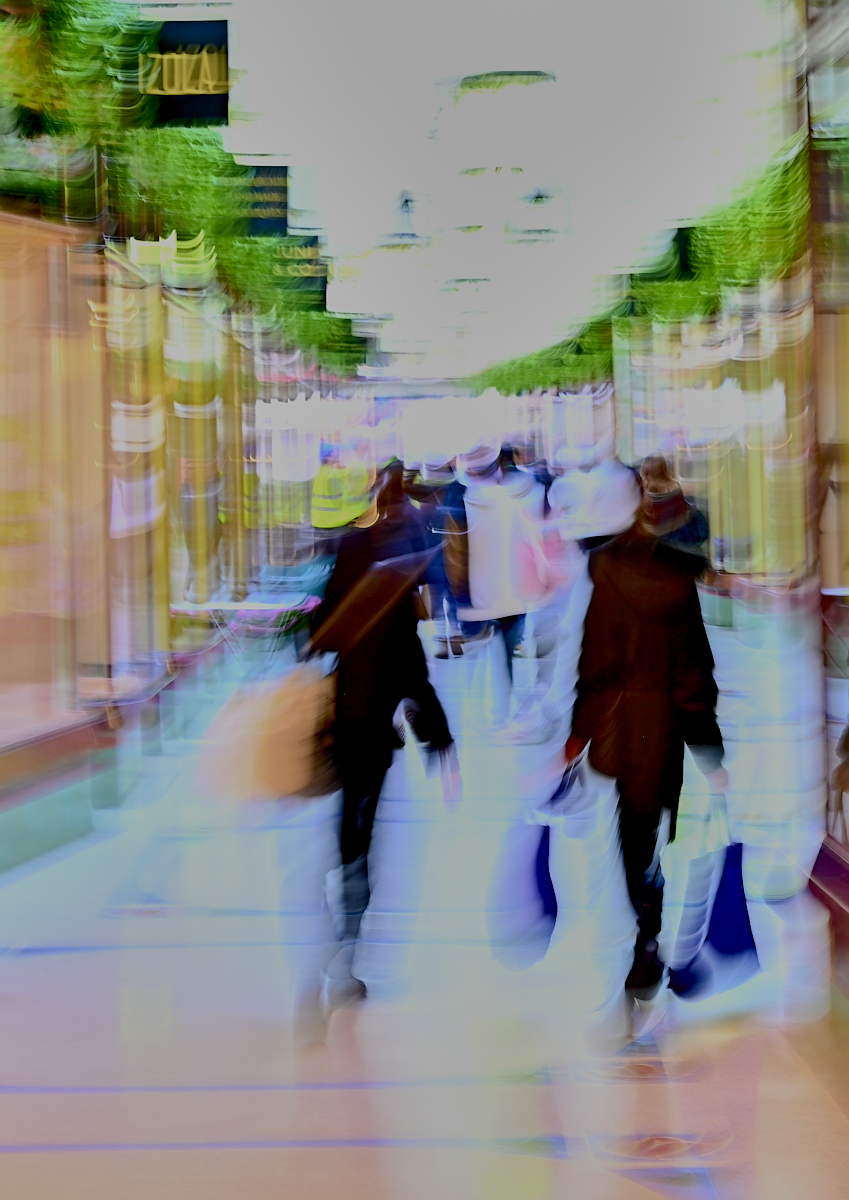 Robin selected this image from those submitted after the walk, saying: "Controlled ICM is so effective here. It does wonderful things to the colours and really gives the impression of busy shoppers". Paul Gray commented that "Members of the group inspired me to look at subjects differently. Here I wanted to show the Royal Arcade epitomising days of pre internet shopping. I chose ICM, boosting colour and brightness all to emphasise a bustling yet pleasurable place to be." 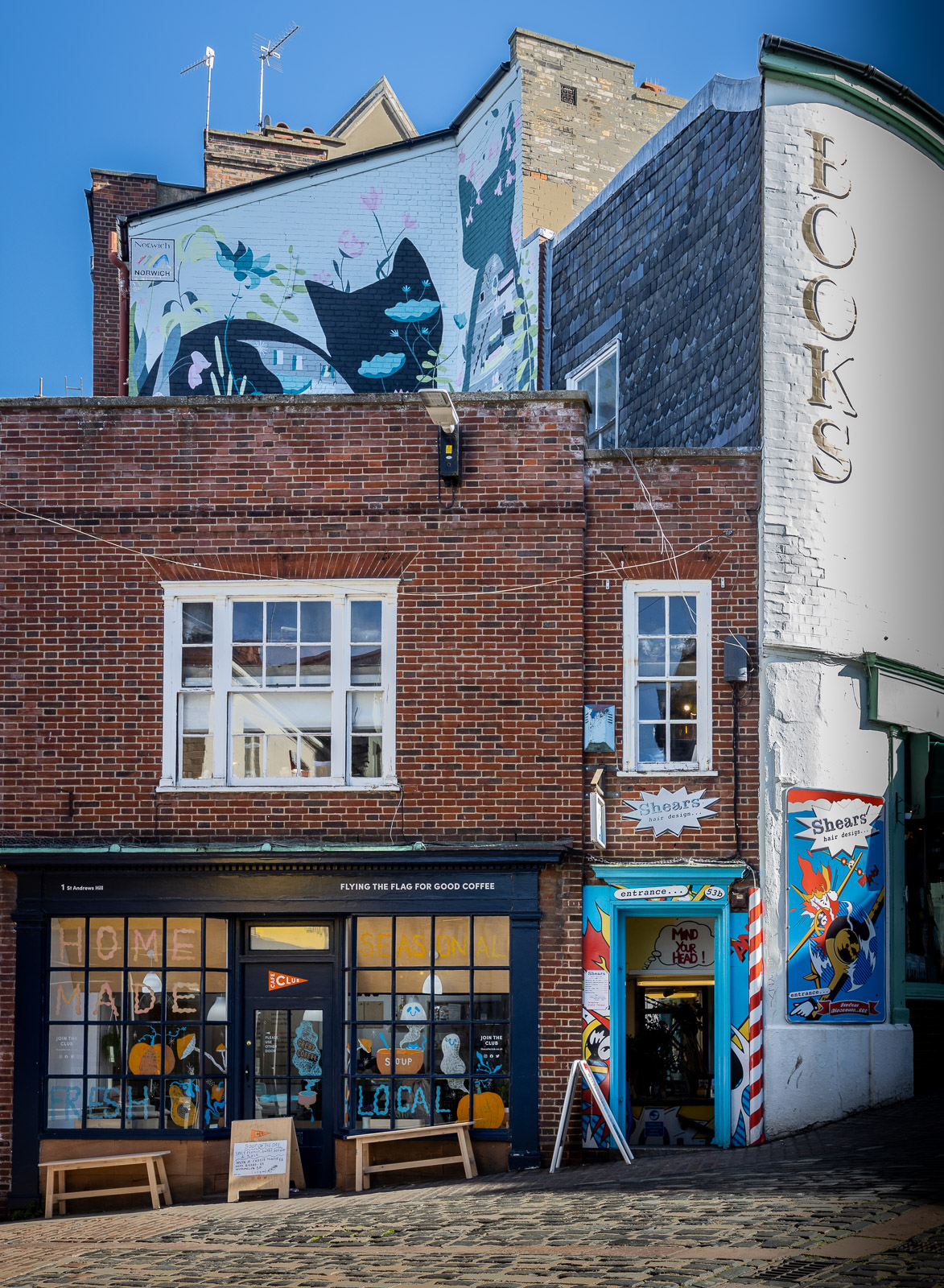 Geoff Long followed his own advice: "Look up, you never know what you might see!" and found an irresistible mix of colours and angles, traditional and not-so-traditional in the centre of his home city. Robin certainly couldn’t resist! "This is such an unusual photograph. It combines the expected and the unexpected. The photographer has observed such contrasting images and hidden gems. I wonder how many pedestrians simply walk past without really seeing! A creative eye indeed." 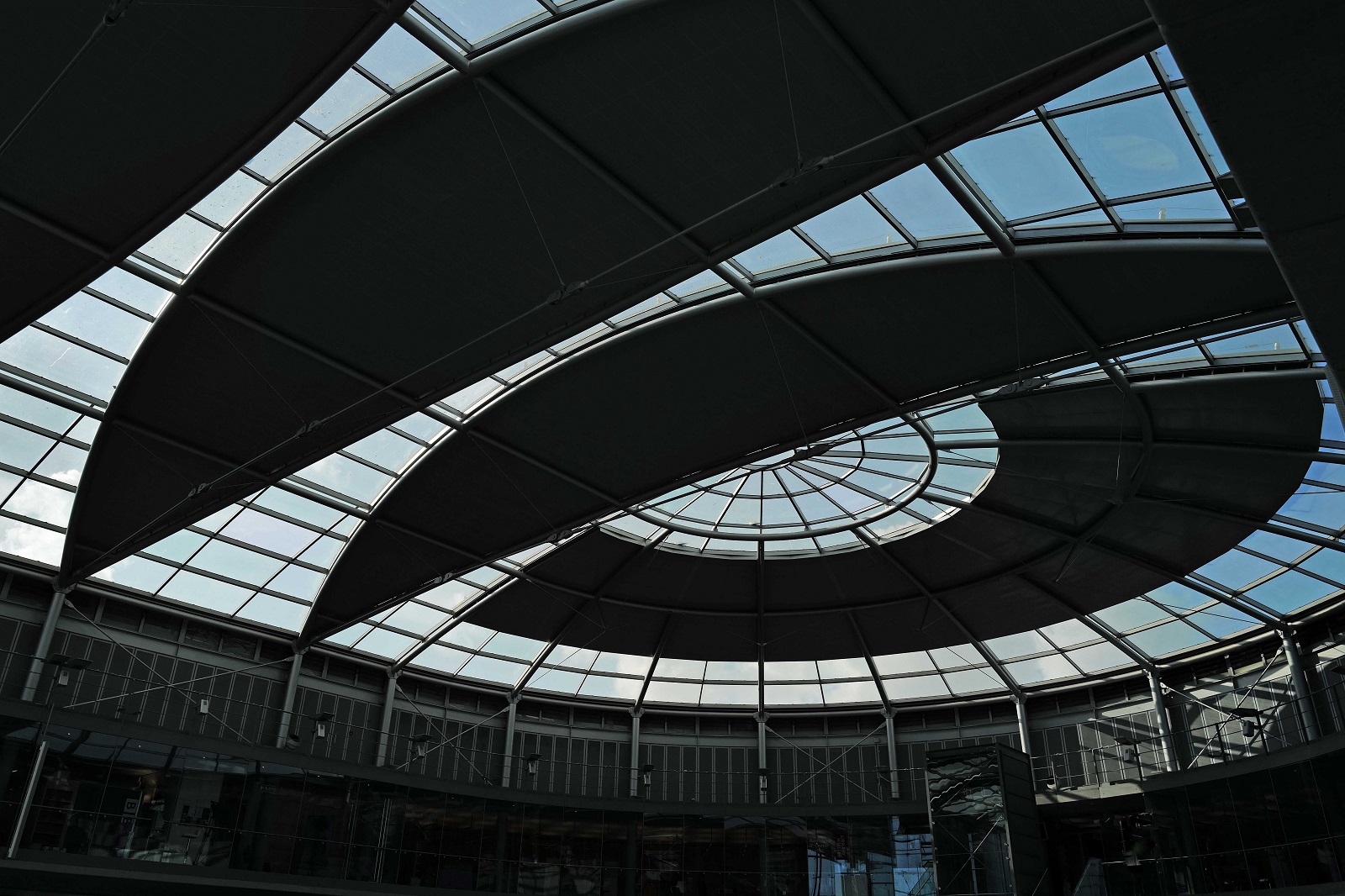 Graham Lingley told me "I have been to Norwich many times but we went to places quite close to the city centre that I did not know existed. The walk was both interesting and informative".  He sent in this image, and it obviously appealed to Robin; "I really like the shapes and position of this roof. The image works so well and was a good choice." 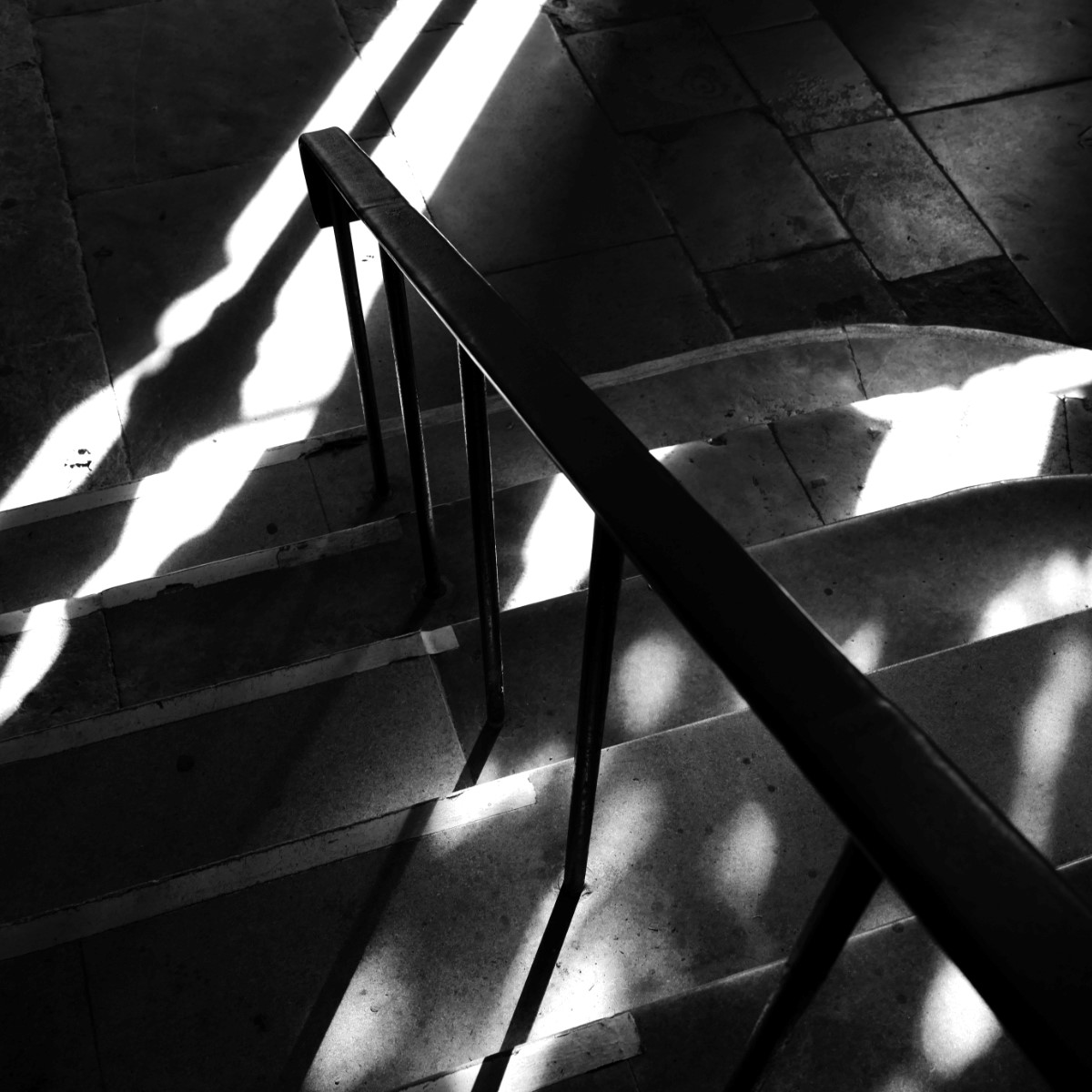 Robin said of this image "This is a stunning photograph. The lines the shapes and the shadows turn this flight of steps into a masterpiece." This was Martin’s first visit to Norwich Cathedral, and outside a side entrance this image just presented itself to him. "The different angles of the light, the steps, the spindles and the rail, the light and dark: it just came together for me. I cropped it square to have the rail precisely bottom right." 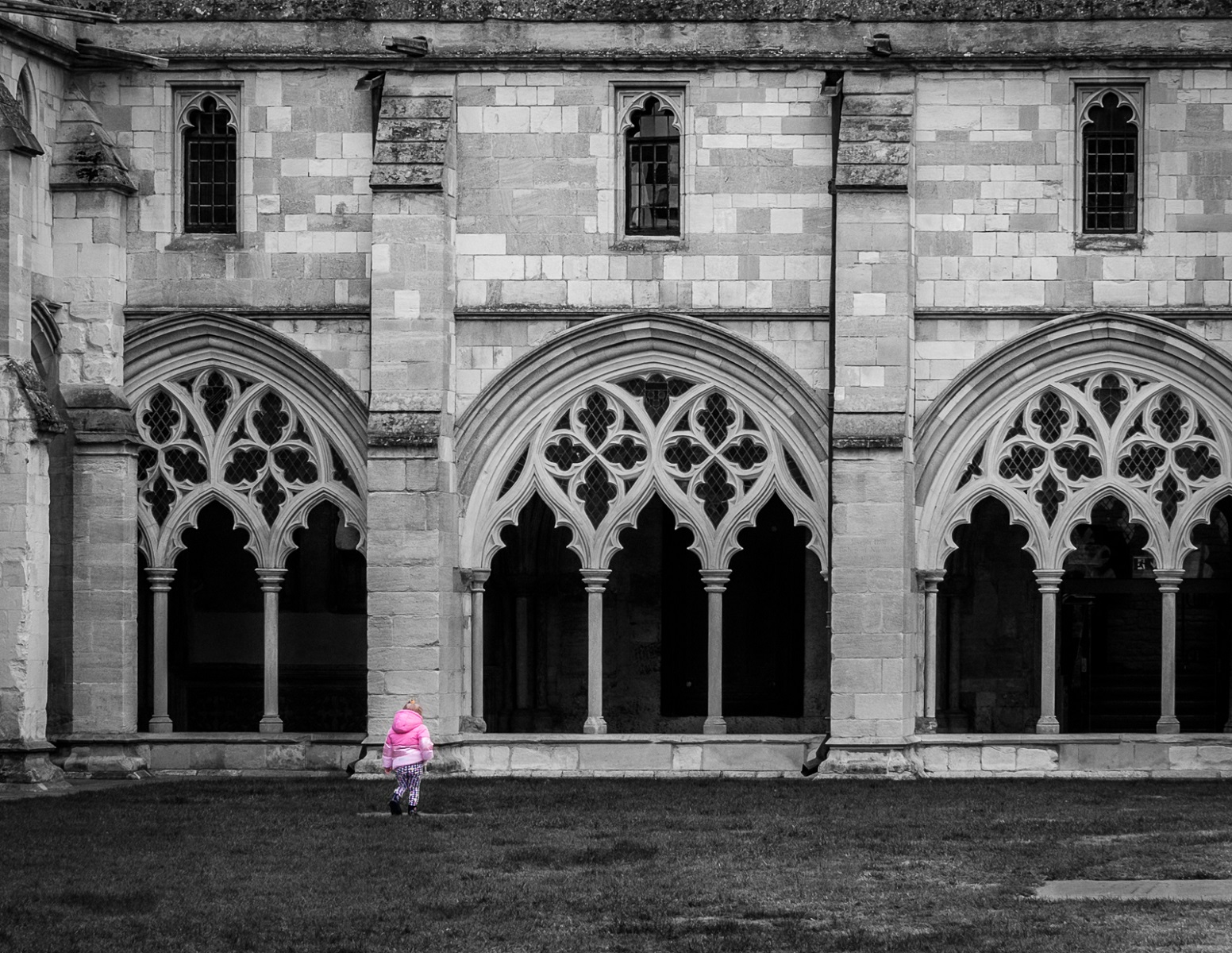 Rebecca dissuaded Robin from having this as top pick – she helped organise the event and envisaged mutterings about favouritism. But it has sneaked in as Highly Commended; "A photograph I now learn was taken by my colleague on the walk Rebecca. It responds unquestionably to the chosen theme – Ancient and Modern. Children photographed like this make me smile" Rebecca comments that colour-popping has a rather ‘Instagram’ reputation and she rarely uses it, but here she could see it would underscore the contrast between the austere setting and the fun-loving toddler.