Your web browser is out of date. Update your browser for more security, speed and the best experience on this site.
Find out more
We use cookies and similar technologies to optimise your experience when using this site, to help us understand site usage, and to tailor our advertising on third party sites. Read about Cookies and view our Privacy Policy at the bottom of each page on our website at any time.
A JavaScript execution error has occurred somewhere on this page. The page may not function as intended. Try refreshing before continuing.
Published 11 October 2020
Andrea Liggins PhD MA FRPS ASIS ABIPP Emeritus Professor of Photography Swansea College of Art, UWTSD

Andrea Liggins is a photographic artist and her exhibitions have been shown in Russia, China, India, the USA, across Europe and the UK, and she is included in the anthology of landscape photography, Land Matters by Liz Wells. Retired as the Dean of Faculty of Art and Design at University of Wales Trinity Saint David (formerly Swansea Metropolitan University), she is now an Emeritus Professor of Photography. She holds a PhD in Photography and Landscape 2005 and in 2007 was awarded Swansea Bay of Business Woman of the Year for her services to the creative industries.

Although alternative landscape photography is her main focus, more recently Andrea has added portraiture as another strand, mainly of artists for publications. She has also been leading an AHRC and ACW research project https://crosspollinationartsciencecollaboration.wordpress.com , bringing artists and scientists together to help conserve bees and other pollinators.

Andrea has been involved with the Royal Photographic Society since 1994 and was awarded the RPS Fenton Medal in 2016.

She is presently a member of the RPS Research distinctions panel.

More information can be found on https://andrealiggins.blog

All images in this article are copyright Andrea Liggins 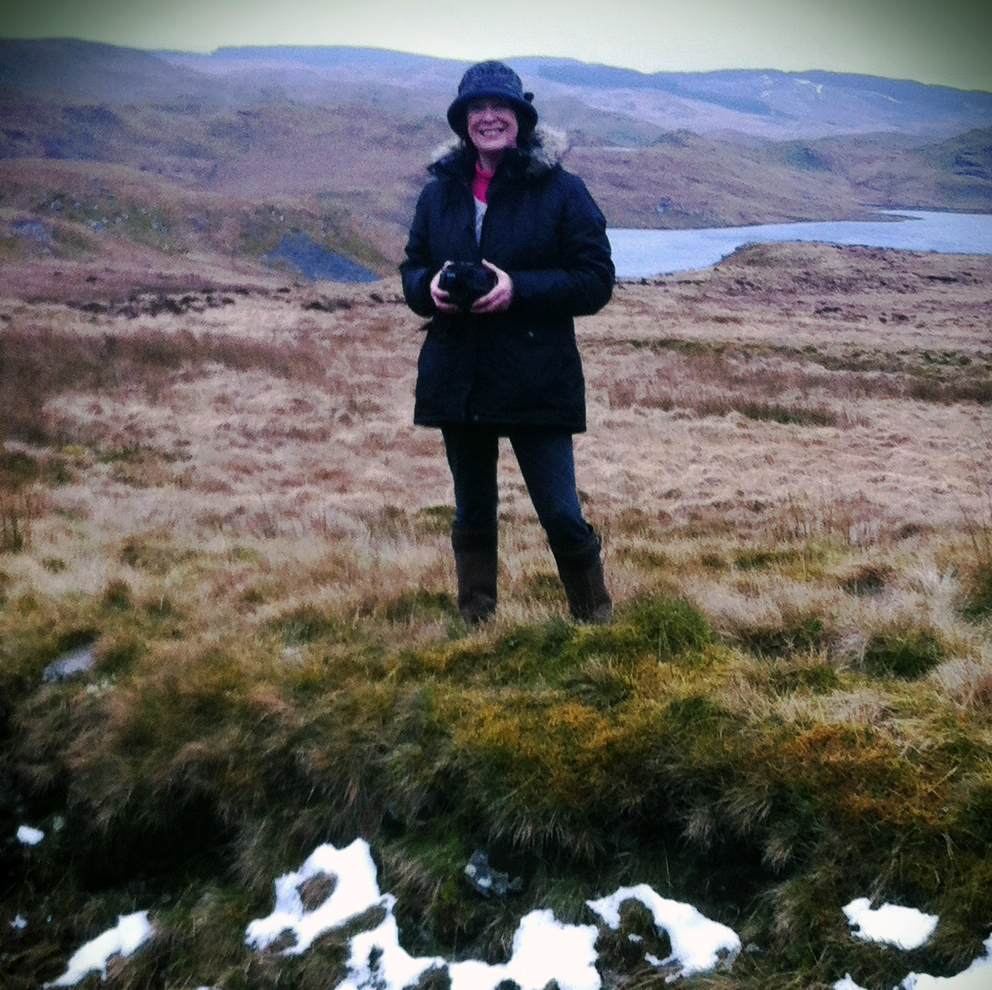 This article first appeared in a blog on the website of The Chartered Institute of Ecology and Environmental Management (CIEEM) which promotes the highest standards of practice for the benefit of nature and society.

I have been a photographer for more than half a century, and am still passionate about making pictures. During the 21st century my photographic research and practice has been concerned with two fields, mostly overlapping. The first, which originated through a PhD study was concerned with how photography has influenced the way different types of landscape are perceived and valued. The second area of research was looking at the benefits of artists and scientists working together, particularly in the areas of environmental sciences, entomology and botany.

My photographic research looks at how the composition and interpretation of landscape photography has ensured that only certain types of landscape have been given value, and this landscape valuation is based on the ideals of the 18th Century. Views from the summits of mountains and hillsides have been seen as important landscapes, rather than the hedgerows and the grassland meadows that are so vital to our ecology.

This may account for the fact that our earliest National Parks were the same regions labelled picturesque or sublime in the eighteenth century; until very recently our landscape tastes don't seem to have changed for almost 300 years. Environmental conservation difficulties arise when an area being assessed does not fit with conventional conceptions of beauty, and this is particularly evident in landscapes such as lowland peat bogs or areas of rough grassland. (Liggins 2007, Rolston 2000).

The view from the hill, frequently sought after and photographed, however, reduces the environment to form and pattern, and often misses the essential detail, the disappearance of our hedgerow wildlife for example and even the hedgerows themselves (Mabey 1993). The fixed gaze of the surveyor places landscape in the position of 'other', at a distance, and creates a set of value systems based entirely upon a scene’s established picturable qualities, the worthiness of the view.

As we are often more familiar with looking at landscape as a ‘view’ we are separated from it. The writer John Fowles suggested “The greatest threat to our countryside is less the physical harm we do than a growing detachment from that reality.” 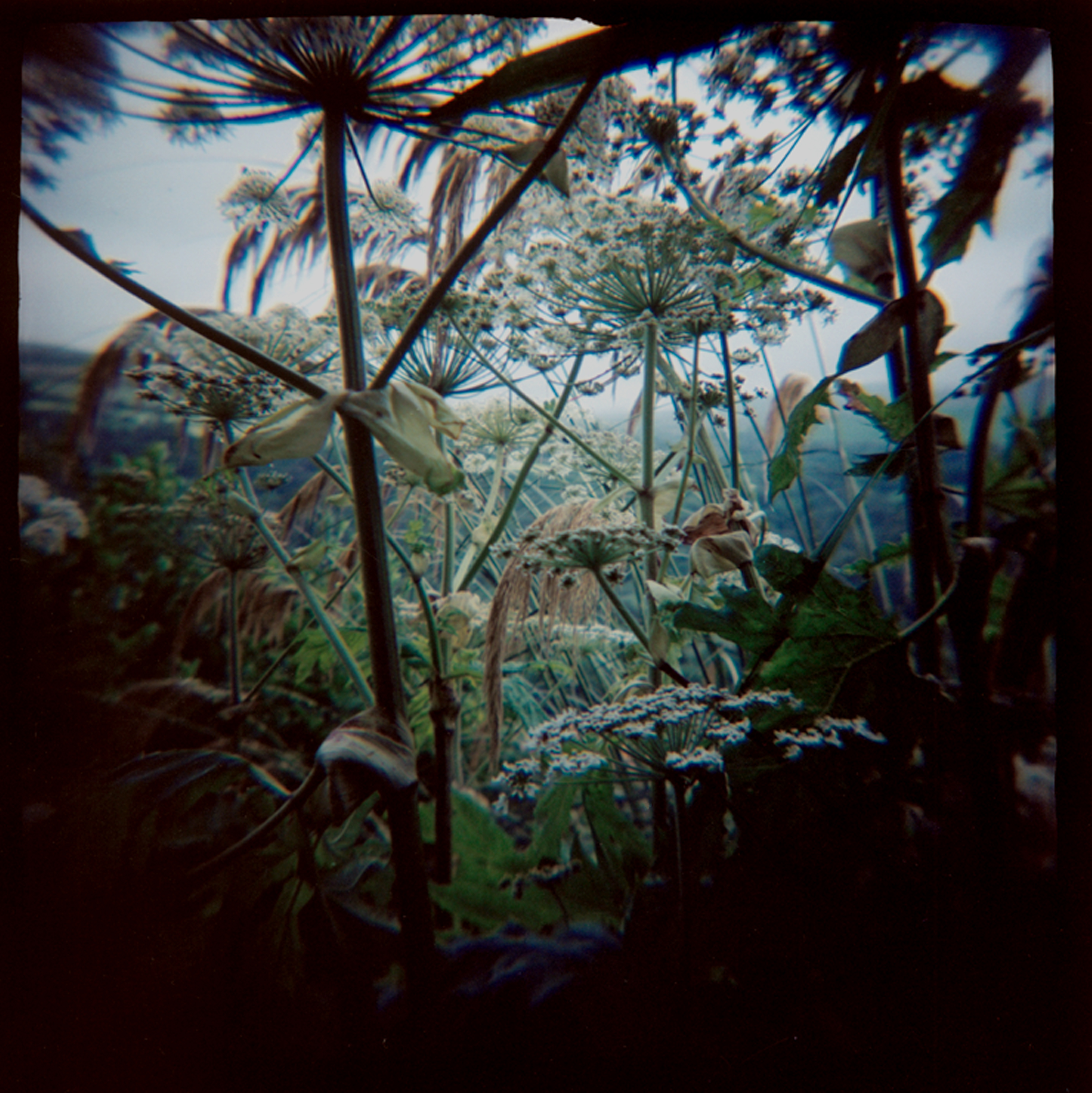 In my photography I put into practice two separate theoretical constructs to underpin the art practice and to determine the methodology. Firstly, theories of scopic regimes applied to photographic representation, particularly the ‘Baroque’ (Martin Jay 1988, Sveltlana Alpers 1983 and Suren Lalvani 1996) with its explosive energy and disrupted composition that can be used to celebrate bio-diversity, and the disorder and messiness of the natural world. Secondly, the more recent non-cognitive views on environmental aesthetics, particularly the ‘aesthetics of engagement’, which prioritises the contextual dimensions of the natural world and promotes a multi-sensory experience of it (Berleant 2013).

I have been exploring "a landscape to look out of, not at" (Mabey 1993), placing myself and camera within the landscape, immersing myself within it. A combination of the ‘Baroque’ way of seeing and this immersion within the environment also provides imagery that represents another facet of non-cognitive environmental aesthetics known as the ‘mystery model’ (Godlovitch 1994), by using art practices that enhance the visceral, sensual and spiritual experience of place.

My quest was to provide a different image of landscape, amongst the plants and at ground level. Often not looking through the viewfinder or screen but placing the camera in amongst the foliage, focussing on only one random part of the subject, often that which is overlooked.

“Andrea Liggins takes photographs of the unseen landscape, places hidden from view by cultural conventions. She directs the camera’s lens into the wasteland, forgotten or disregarded places at the edges of our formal gardens and historically revered vistas or views. Her work draws you into a poetic space, close to nature, giving us the opportunity to adopt an alternative viewpoint.” Professor Catrin Webster. (Webster 2010)

For the second part of the research, that of working with scientists, I have been really lucky to collaborate with a large number of excellent people, who have really moved my work forward and given it purpose, beyond the gallery.

The first was Dr Natasha de Vere, who is Head of Science and Conservation at the National Botanic Garden of Wales (NBGW). Dr de Vere’s scientific research focuses on how to conserve the world’s biodiversity. She led the Barcode Wales project that made Wales the first nation in the world to DNA barcode all of their native flowering plants. She continued this work with Barcode UK and has DNA barcoded the entire native UK flora and is now using this research platform to understand the foraging preferences of wild pollinators and honey bees, and also in a range of health related research programmes.

This first collaboration resulted in a large exhibition of 52 photographs, Barcode Wales –Beyond the Visible, held in the Nanshan Botanic Gardens, Chongqing, China. It launched the 2012 Wales in China week and was fully funded by the Chinese and Welsh governments. Natasha and I spent Wales Week in Chongqing where we were invited to speak at a whole range of venues to scientists, artists, students, volunteers and TV and Radio programmes. The exhibition received over one million visitors and a beautiful catalogue was designed and produced in China. In many of the talks the photographs were likened by the audience to “a bees eye view”. The exhibition returned in part to the gallery at the NBGW, and some of the images formed part of exhibitions in Jaipur and Delhi, partly supported by the British Council. 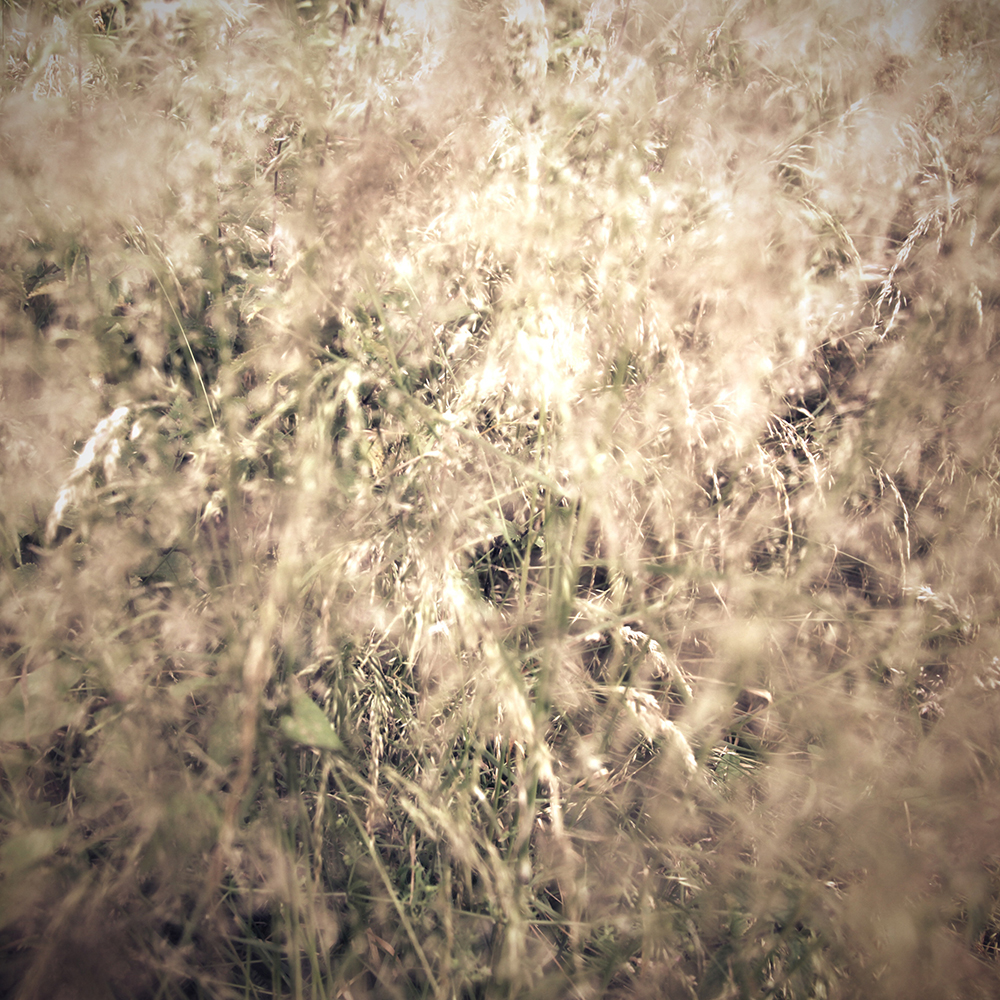 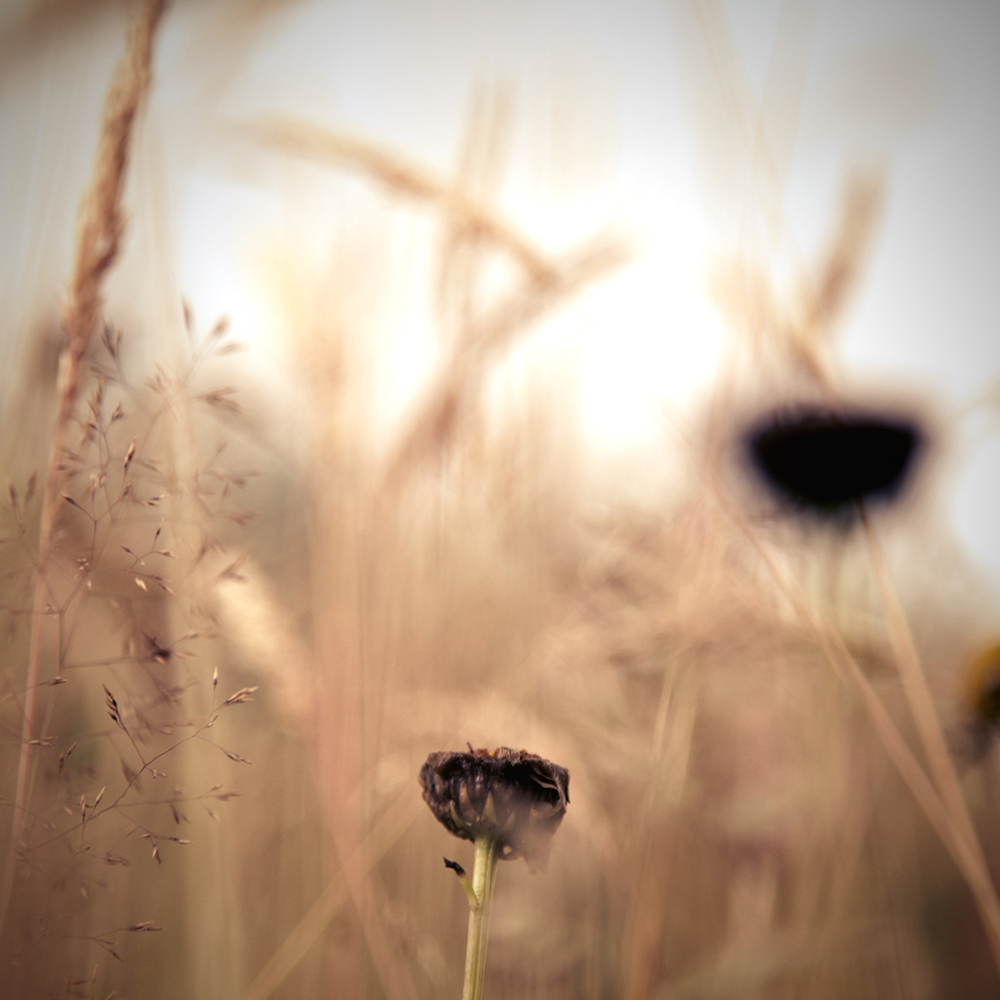 For much of my earlier photography I use old plastic lens cameras, such as the Rocko or Diana, which produce uncertain focus, minimum detail and show many of the faults that in my early photograph education I was taught to avoid. The lack of detail emphasised the sensation of place rather than it’s description. For the Barcode Wales work, however, I chose to work with a high-resolution digital camera, and used minimum depth of field to dilute the detail. 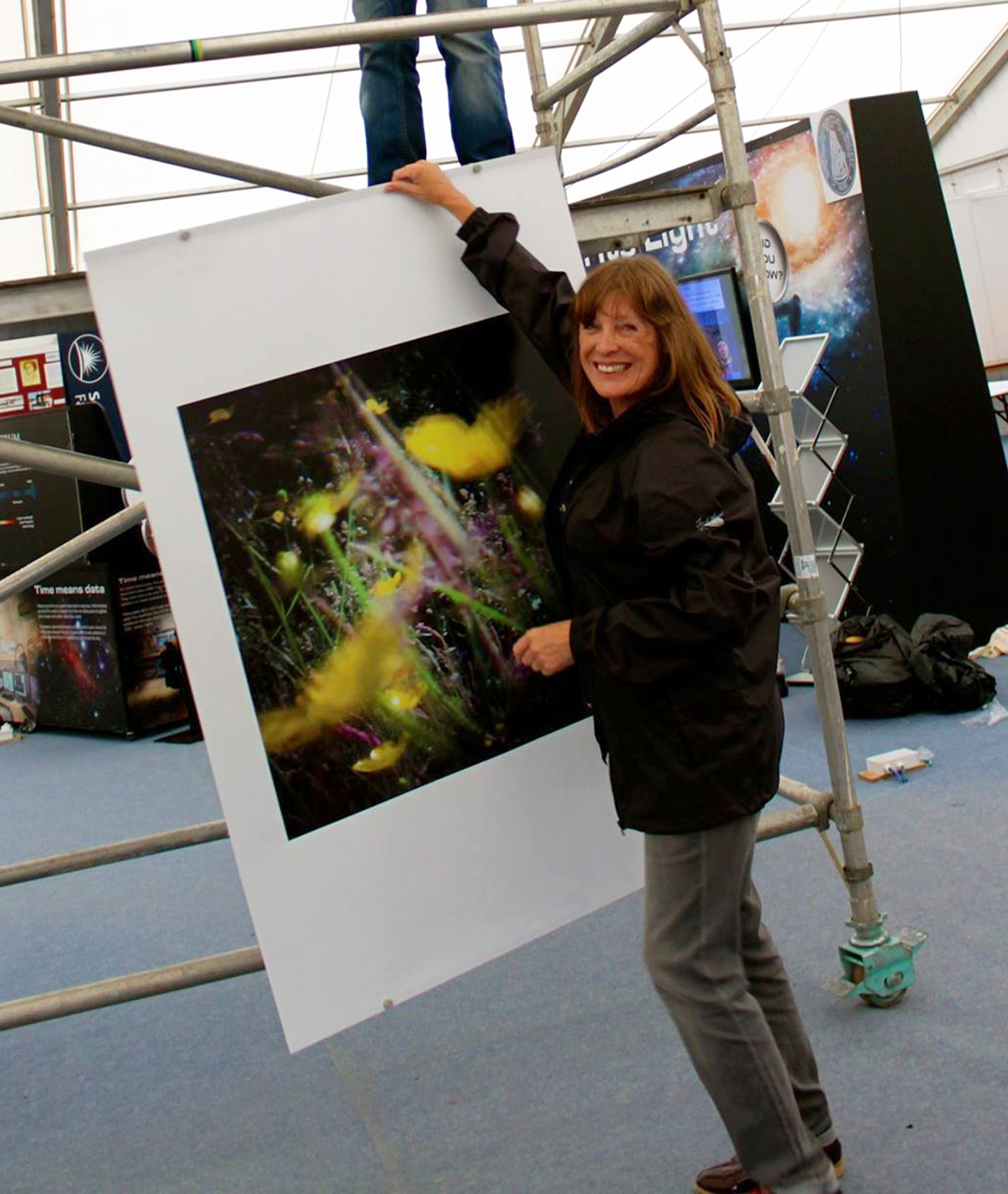 Image : Erecting Barcode UK- Moving beyond the Visible in the Science Pavilion at the Welsh National Eisteddfod in Llanelli

Dr de Vere and I have also collaborated on the Barcode UK project with an exhibition of photographs at the Eisteddfod in Llanelli (Barcode UK- Moving beyond the Visible) in the Science Pavilion. More details can be found in an article on the Eisteddfod website https://eisteddfod.wales/searching-honeys-antibiotic-elements-maes The images were printed to 1.0 by 1.5 metres onto waterproof material and hung from the rafters. These same prints were hung from the walls of the Double Walled Garden of the NBGW and framed prints in India 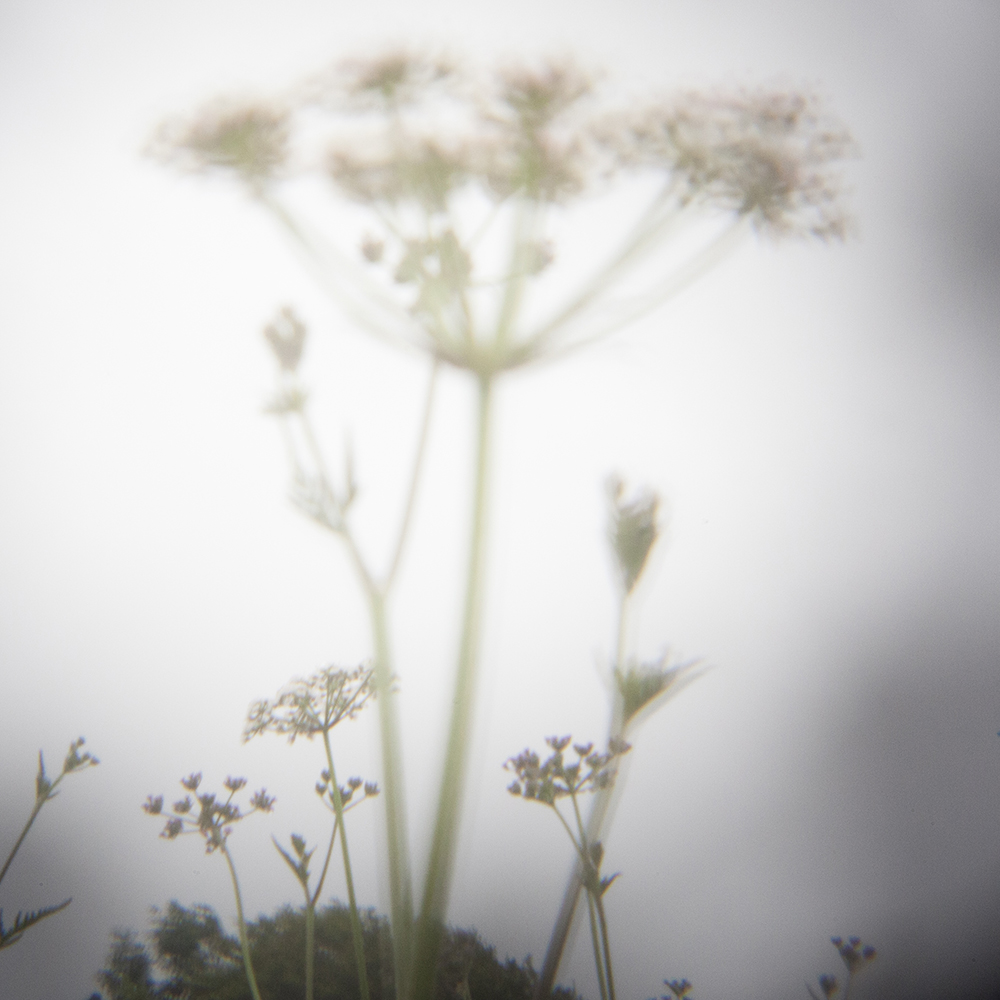 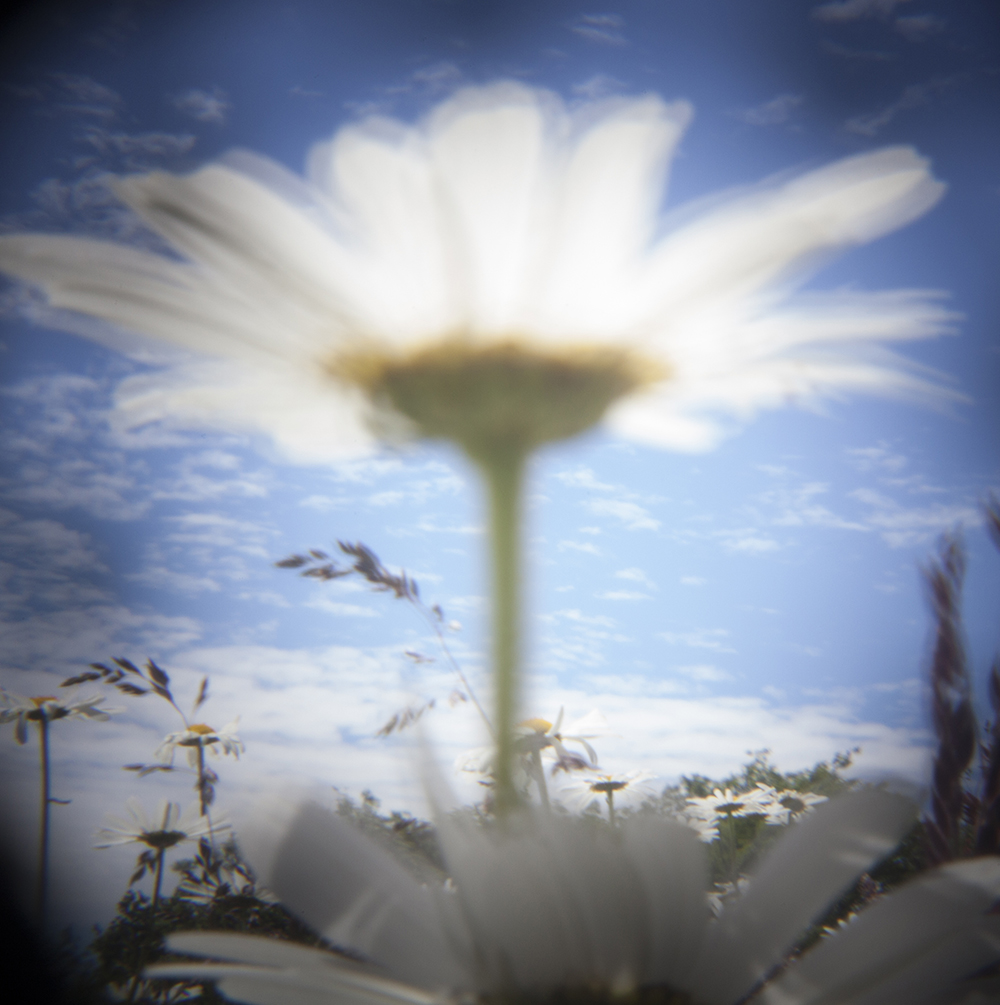 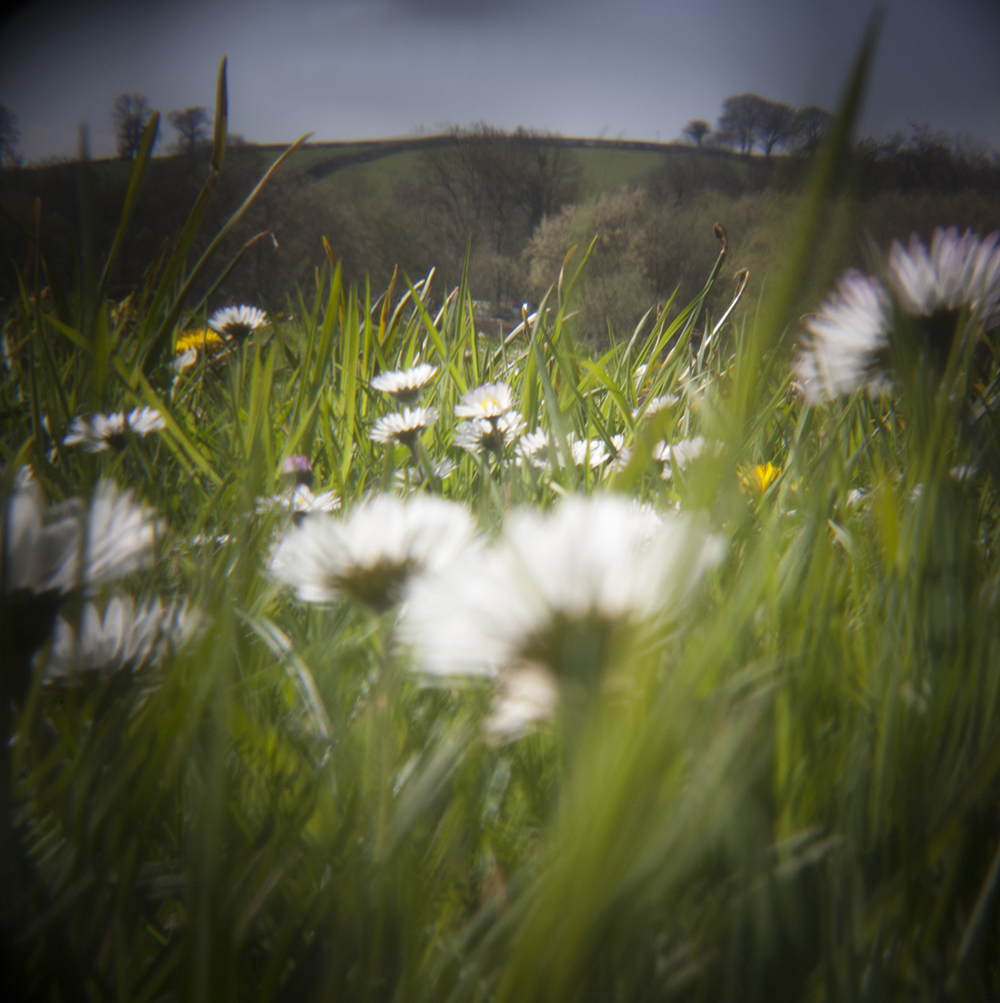 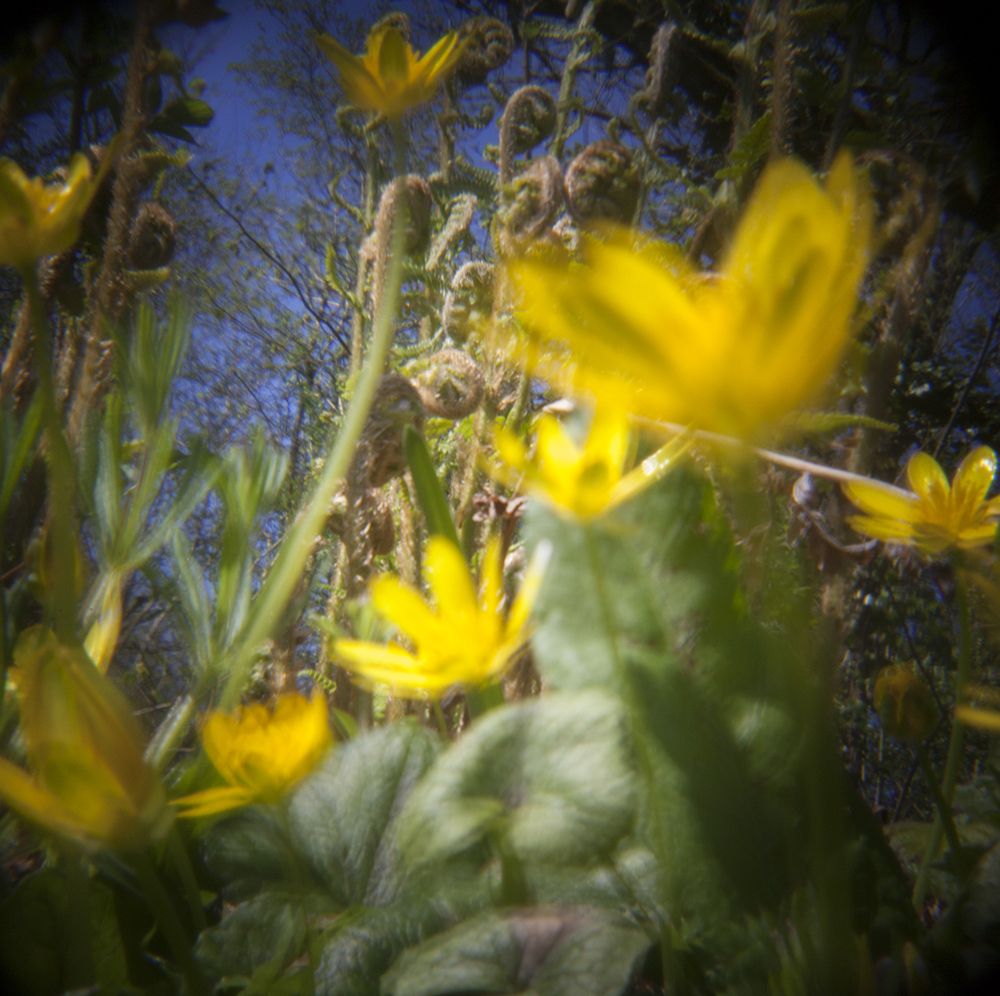 During the writing of an Arts and Humanities Research Council (AHRC) Research Networking project Cross-pollination: Re-valuing Pollinators through Arts and Science Collaboration, for which I was Principal Investigator I met landscape economist from Aberystwyth University, Professor Michael Christie, who was the Theme leader for a Natural Science Research Council project Diversity in Upland Rivers for Ecosystem Service Sustainability (DURESS). I was invited as the coordinating artist on this project. My photography explored the aesthetic value of upland rivers, namely the Teifi and the Tywi. The site that I was particularly drawn to was the source of the Teifi, the Teifi Pools. In the 19th century John Henry Cliffe described the place as the Great Desert of Wales.
"The locality we were now traversing is one of the most untamed and desolate in either division of the Principality; it has indeed with perfect truth been called the "great desert of Wales." Vast sweeping ranges of hills with round tops, add to the dreary aspect of this nearly unpeopled region." (John Henry Cliffe, 1860)

I found it a fascinating site, however, and from the moment I set foot in this isolated landscape I was captivated by it’s wild emptiness that hides a wealth of sensory treasures, it was not ‘dreary’ as Henry Cliffe suggested at all. The immersion into the landscape was literal, using an underwater camera the photographic viewpoint was sometimes from below the surface of the icy streams that feed the both rivers. The resultant exhibition called Headwaters was again in large format prints size (one metre square). 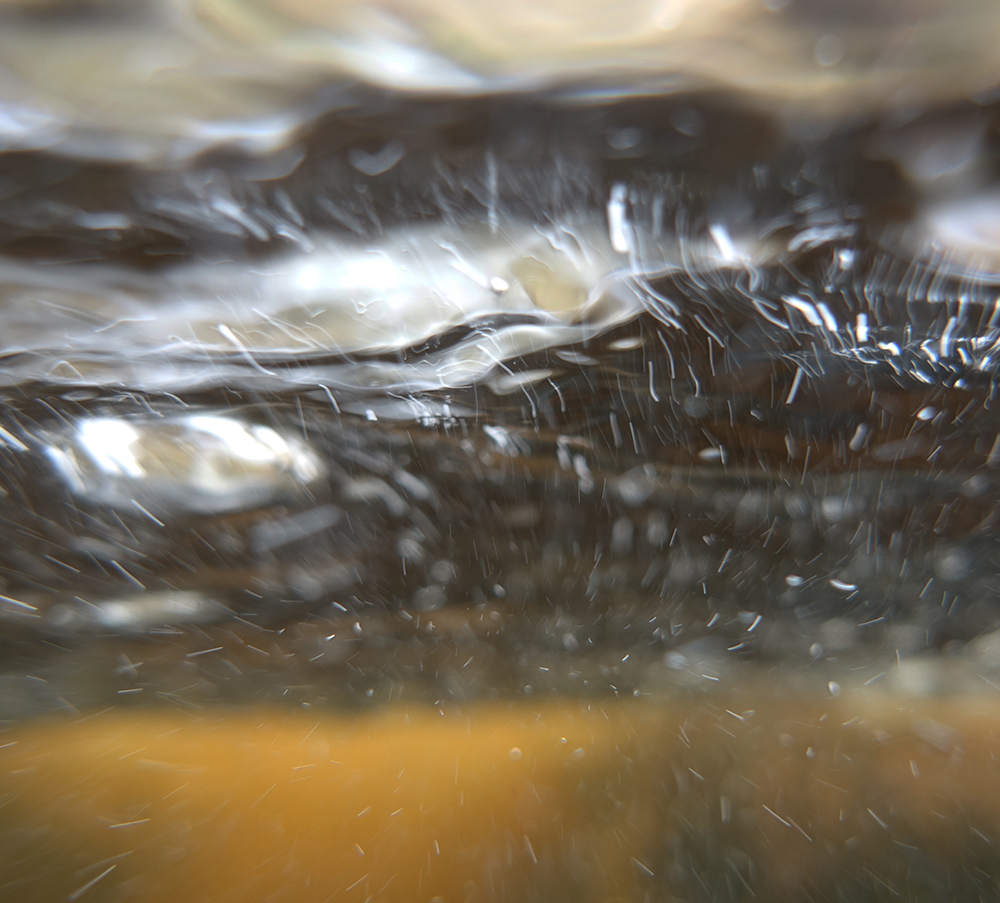 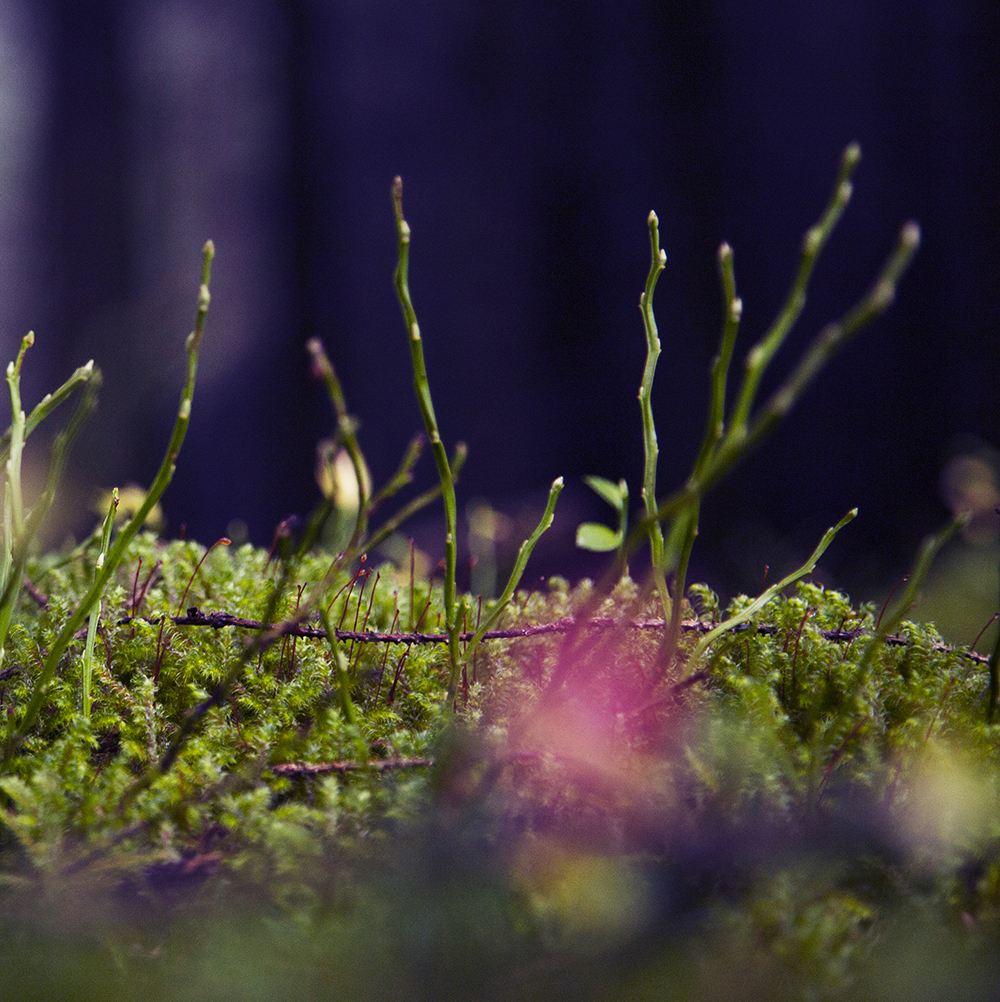 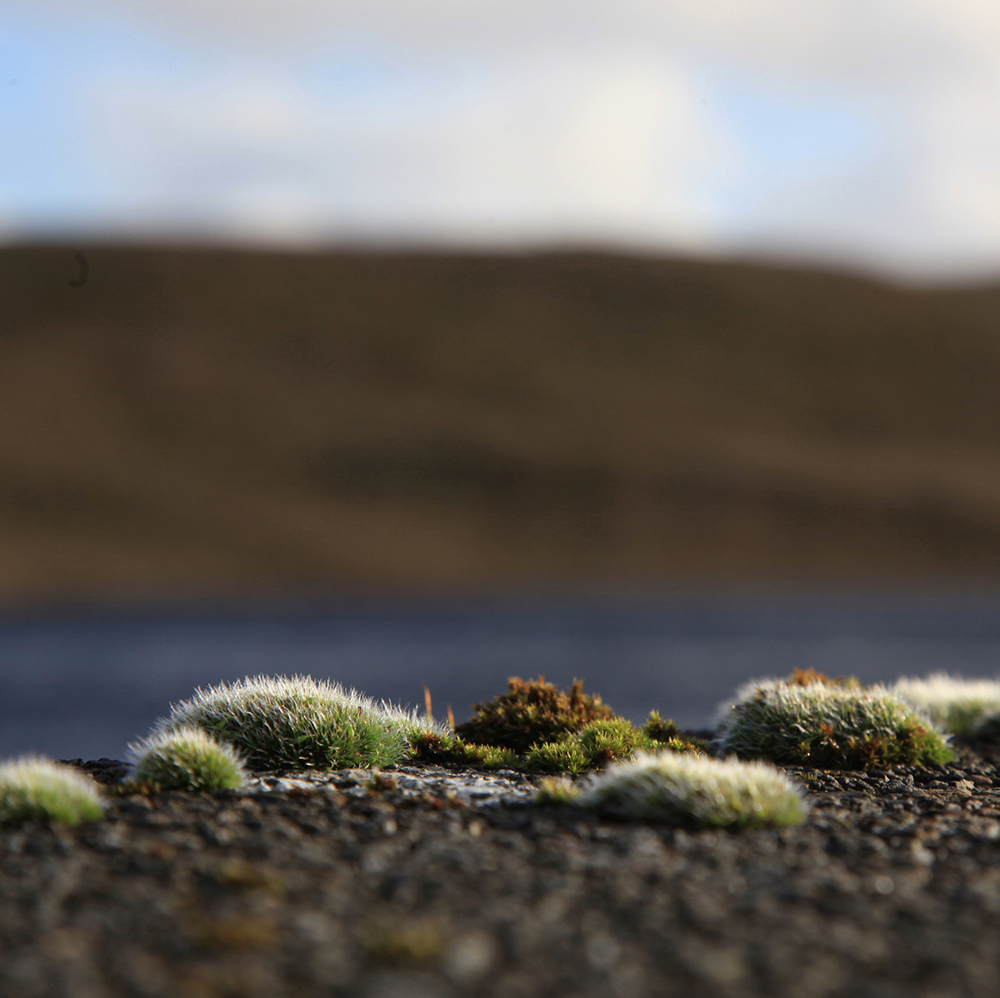 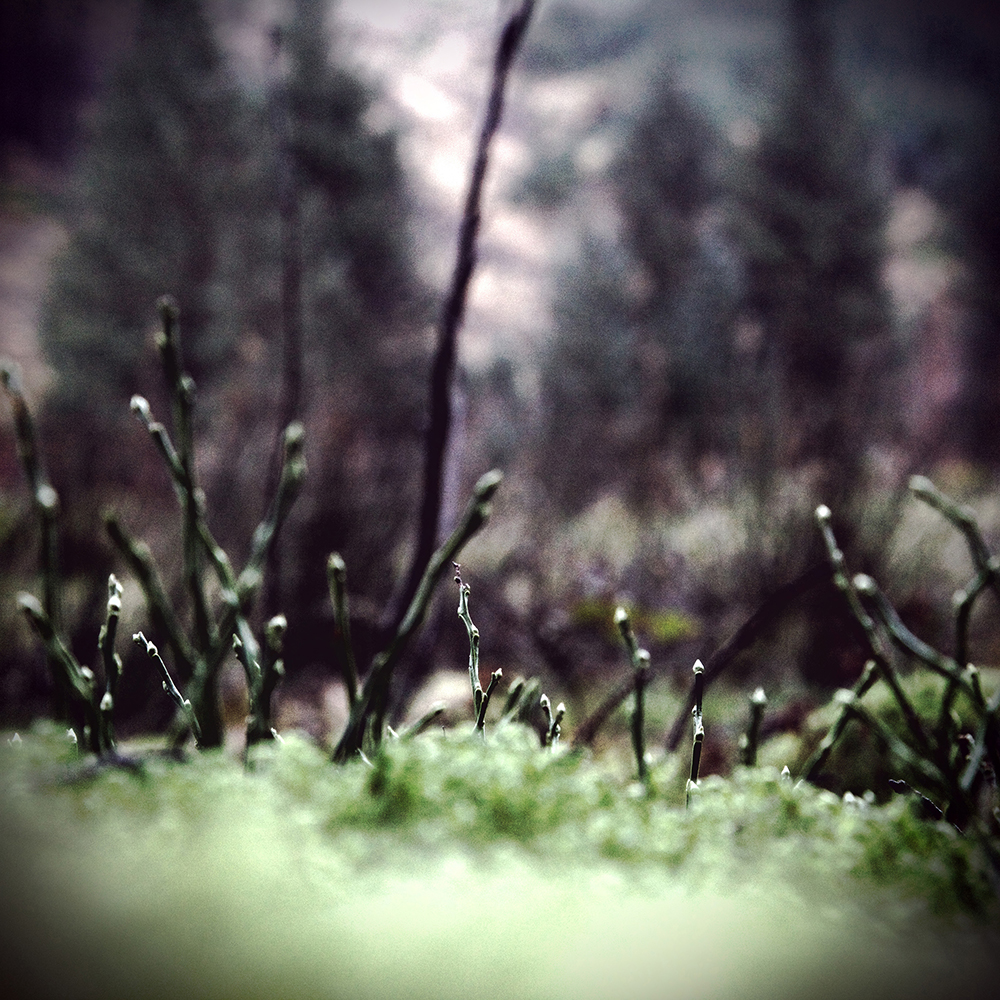 Fortunately, the Cross-pollination project was funded by the AHRC and gave the opportunity, for myself and other artists from Wales, to work with some of the top international scientists who were researching pollinators. The Arts Council of Wales provided additional funding to produce finished artworks. The final images shown here are the result of my collaboration with Dr Andrew Lucas, from Natural Resources Wales, to promote the often forgotten and neglected habitats of the hoverfly. The two sites I photographed were both places that are not seen as picturesque and wouldn’t draw hoards of tourists and photographers. To me, however, they were magical places of quiet, hidden beauty.
“I’ve visited the flower-rich pastures where I do my research dozens of times now, but Andrea’s photographs have given me a completely different perspective on these beautiful, and now rare, habitats. Not only that, but I have been using her pictures in talks and conferences about the science we are doing, and give our audiences the real ‘feel’ of these very special places.” Dr Andrew Lucas (Lucas 2017) 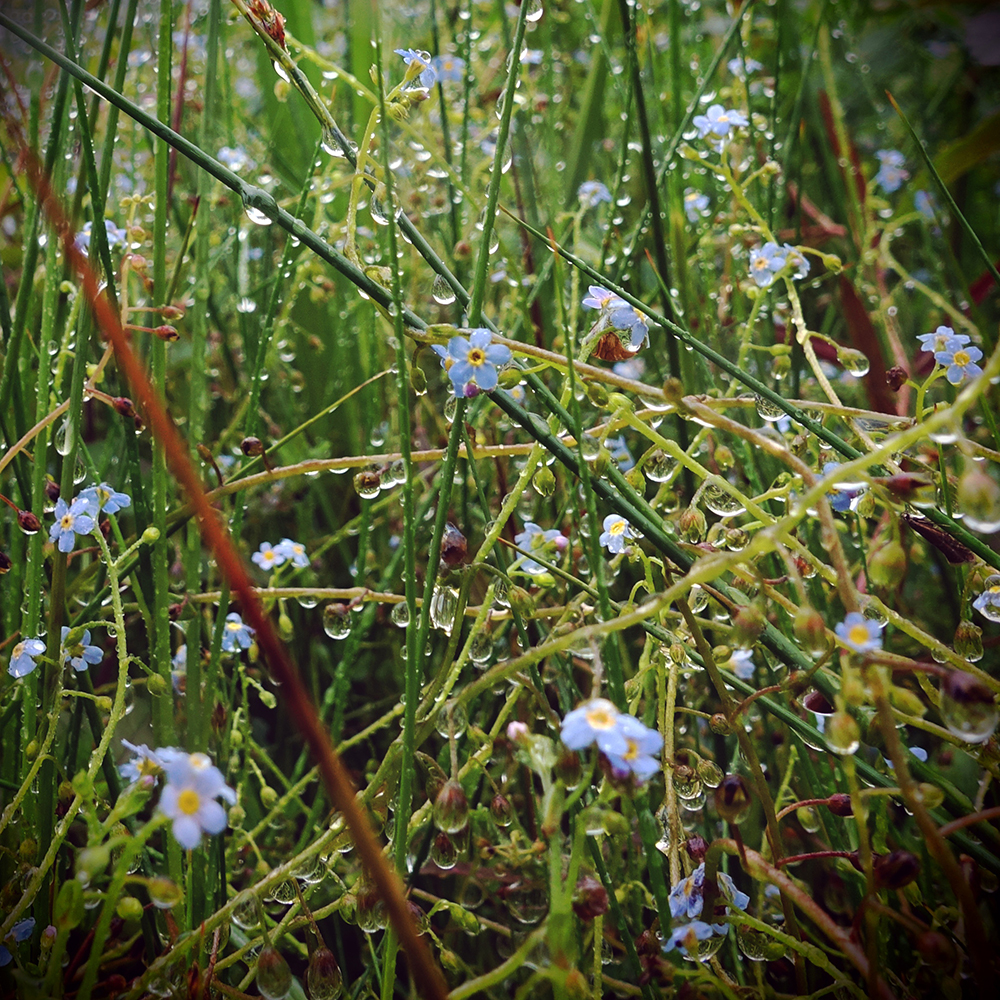 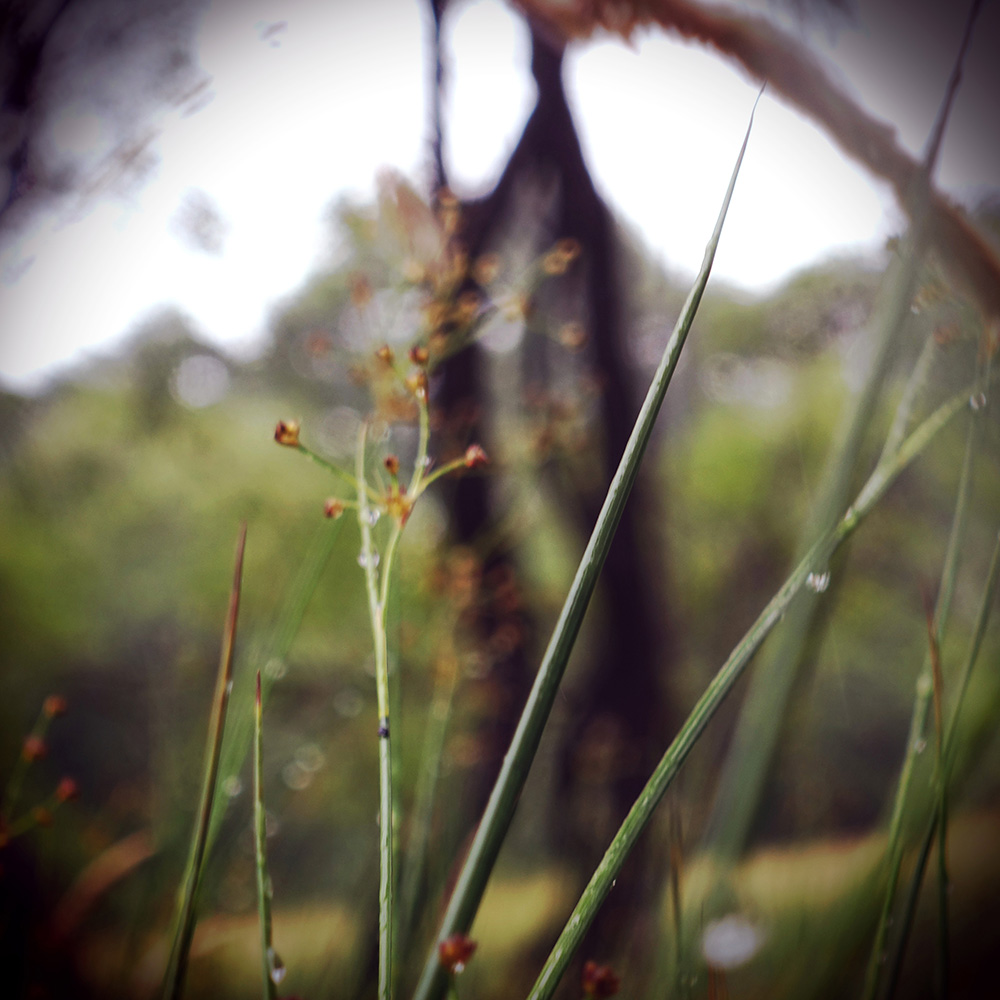 Dr Lucas wasn’t alone in finding benefits in the collaboration with the artists on the project. Many suggested that the process gave a different perspective on their work.

Duncan Coston, (Coston, D. 2017) for example, suggested that, ‘ Although I originally had some misgivings on how the Arts and Sciences would work together, with both disciplines having such different methods and processes, I was immediately put to rights! This project has opened up a whole set of ideas and ways of looking at scientific research.’

Following on from this collaboration my Cross-pollination research took a different direction, that of pollinator portraits, firstly photographing Dr Lucas’s collection of hoverflies, and then working with Professor Scott McArt at Cornell University USA, where I made photographic portraits of bees and hoverflies from around the world.
But that’s another chapter! 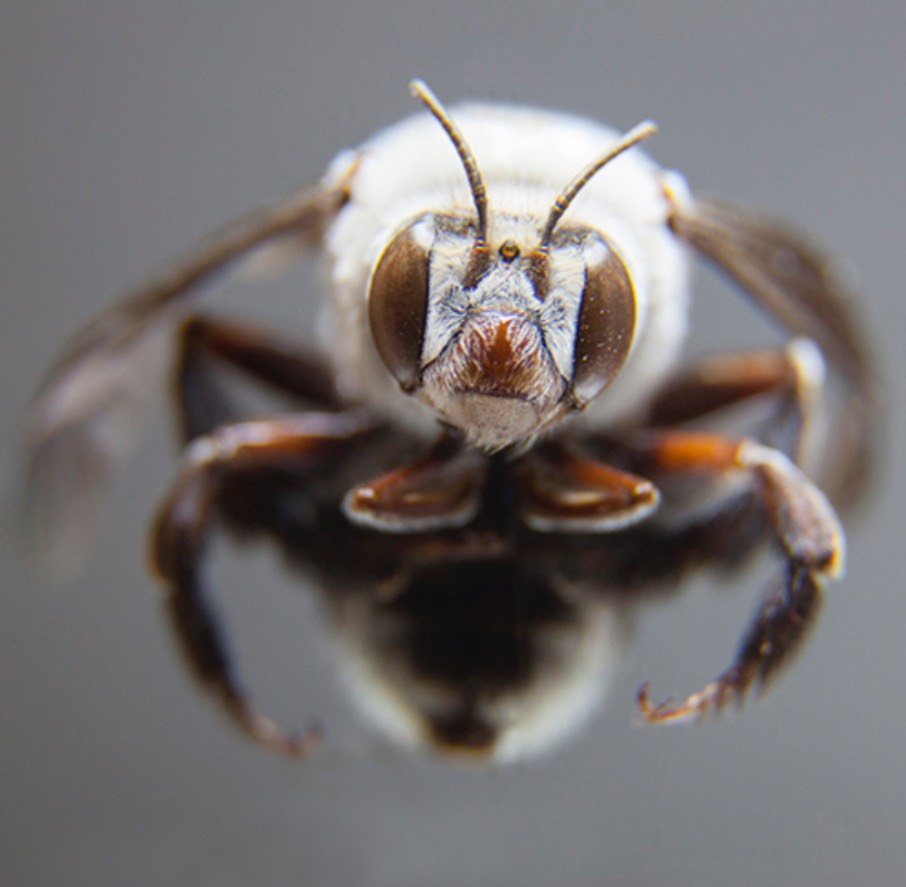