Your web browser is out of date. Update your browser for more security, speed and the best experience on this site.
Find out more
We use cookies and similar technologies to optimise your experience when using this site, to help us understand site usage, and to tailor our advertising on third party sites. Read about Cookies and view our Privacy Policy at the bottom of each page on our website at any time.
A JavaScript execution error has occurred somewhere on this page. The page may not function as intended. Try refreshing before continuing.
Published 05 April 2021

On 6 April 1920 - exactly 101 years ago tomorrow - the photographer, Heinrich Hoffmann, joined the fledgling Nazi Party.  When Adolf Hitler took control of the Party in 1921, Hoffmann became his official photographer and Hitler decreed that no-one other than Hoffmann should take photographs of him; although Wieland Wagner (son of the composer, Richard Wagner) was later granted special permission to photograph Hitler at the Bayreuth Festival where Wagner’s epic Der Ring des Nibelungen (‘The Ring of the Nibelung’) was showcased.

Hoffmann reputedly took over two million photographs of Hitler and eventually became his confidant and one of his most trusted propagandists.  Hoffmann and the Reich Minister of Public Enlightenment and Propaganda, Joseph Goebbels, ‘choreographed’ events that reinforced the conceited allusion of Nazi Germany as the Third Reich - the ‘Third Empire’ after the Holy Roman Empire and the German Empire.

The allusion of the Third Reich was perhaps never more perfectly staged than at the 1934 Bückeberg Harvest Festival, where the god-like Führer (‘Leader’) was feted - as if he were Woton (Óðinn) incarnate - by a pantheon of devoted generals and an army of adoring troops in an event of truly Wagnerian style and proportion.

Time magazine includes Hoffman’s photograph of Hitler at the Bückeberg Harvest Festival in its 100 Most Influential Images of All Time, stating that, “Hoffmann’s expertly rendered propaganda is a testament to photography’s power to move nations and plunge a world into war.”

Born in Hammersmith, London, to Jewish parents, the comedian Sacha Baron Cohen has spent his life challenging intolerance and hate.  As a teenager, he marched against the fascist National Front and to abolish apartheid; as a Cambridge undergraduate, he travelled across America to research his thesis about the civil rights movement.  As a comedian, his outrageous characters are relentless in the pursuit of bigotry and prejudice.

In 2019, in New York, Baron Cohen addressed the Anti-Defamation League summit on antisemitism and hate.  He called-out the social media platforms for their collective culpability for a surge in “murderous attacks on religious and ethnic minorities.”  Focussing on Facebook, Baron Cohen said, “if you pay them, the platform will run any ‘political’ ad you want, even if it’s a lie.”  He made the point that “the greatest propaganda machine in history has spread the oldest conspiracy theory in history - the lie that Jews are somehow dangerous.”  As one headline put it, “Just Think What Goebbels Could Have Done with Facebook.”

Censorship and control were central to Goebbels’ enforcement of Nazi ideology; his Ministry controlled the media, broadcasting, the visual arts, film-making, theatre, literature and music, and it quashed even the slightest hint of public dissent.  To achieve this, the Ministry subscribed to the fundamental principle of propaganda: if you tell a lie big enough and keep repeating it, people will eventually believe you.  This principle has a resonance in more recent events. 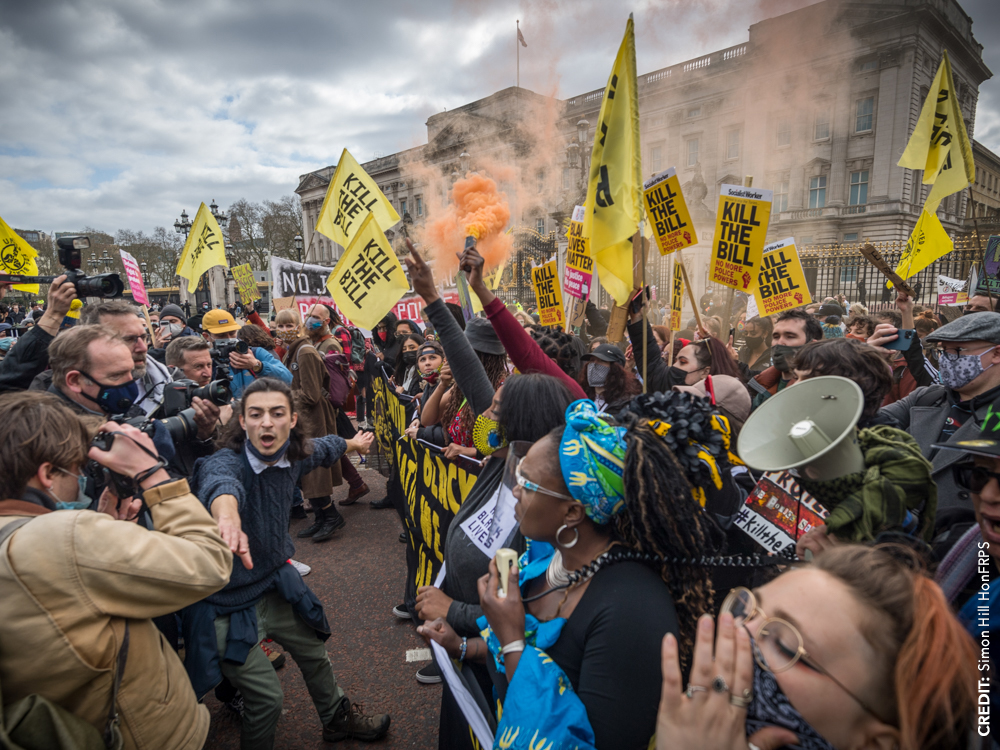 Earlier this year, The New York Times published an investigation into how Donald Trump used the “big lie” principle to subvert the 2020 US election and how that lie became the catalyst for the violent storming of the US Capitol on 6 January 2021.  Closer to home, there is a now-familiar commentary that many of the claims supporting ‘Brexit’ followed this same principle; this weekend, protests took place in London and in cities across the UK as demonstrators vented their anger at the Government's new Police, Crime, Sentencing and Courts Bill.  This Bill is 'justified' on the "big lie" of it being “a manifesto Bill that this government was elected on,” as declared by Home Secretary, Priti Patel, “The British people voted for it.”

The British electorate did vote for tougher sentencing and for the criminalising of trespass but it did not vote for a ban on all forms of protest unless sanctioned by the state, nor did it vote for police powers to 'stop and search' someone anytime, anywhere, and without any reasonable suspicion of intent to commit crime.

With the symbiotic relationship of government propaganda and the platform of social media, perhaps we are all being goose-stepped towards Wagner's Götterdämmerung (‘Twilight of the Gods’) - a German translation of the Old Norse Ragnarøkkr, where the 'old order' was brought to a bloody and calamitous end with the death of great leaders, a multitude of natural disasters and the submersion of the world in water.

Baron Cohen ended his address with these words, “if we prioritize truth over lies, tolerance over prejudice, empathy over indifference and experts over ignoramuses - then maybe, just maybe, we can stop the greatest propaganda machine in history, we can save democracy, we can still have a place for free speech and free expression.”

(main)  The Third Reich protracted a war on a horror and scale like no other; citizens with mental or physical disabilities, gypsies, homosexuals, political enemies, ethnic minorities and millions of Jews were hunted down by the Schutzstaffel (the ‘SS') paramilitary death squads.  Genocide and mass murder became the hallmarks of Hitler’s new Germanic heroic legend, a ‘legend’ promoted and promulgated by propaganda.  Heinrich Hoffmann's photograph of Hitler at the 1934 Bückeberg Harvest Festival is acknowledged as perhaps the finest example of his "expertly rendered propaganda"; pictured here with a copy of his 1934 picture book Jugend um Hitler ('Youth around Hitler') published by Zeitgeschichte-Verlag (Berlin, 1934/43), a replica 'Luftwaffe' Leica IIIc and a Walther P38 9mm semi-automatic pistol, developed to be the service pistol of the Wermacht (the unified armed forces of the Third Reich).

(inset) The “Kill the Bill” march passes Buckingham Palace, London, 3 April 2021.  Several human rights groups have claimed that the Government’s ‘Police, Crime, Sentencing and Courts Bill’ will effectively criminalise any form of public protest not sanctioned by the State.