Your web browser is out of date. Update your browser for more security, speed and the best experience on this site.
Find out more
We use cookies and similar technologies to optimise your experience when using this site, to help us understand site usage, and to tailor our advertising on third party sites. Read about Cookies and view our Privacy Policy at the bottom of each page on our website at any time.
A JavaScript execution error has occurred somewhere on this page. The page may not function as intended. Try refreshing before continuing.
Published 22 February 2021

England boasts two substantial texts of its early history, perhaps without parallel in any other nation: the Anglo-Saxon Chronicle, created in the late 9th century, and Domesday Book, created two centuries later in 1086.  The earlier of these - the Chronicle - is the single most important historical source for English history from the departure of the Romans, around AD400, to the arrival of the Normans in 1066.

It was during the middle part of the Anglo-Saxon period that two cemeteries were created on the bank of the tidal River Deben, near Woodbridge in Suffolk.  The most famous of these included a ship burial, most likely the final resting place of Rædwald, King of the East Angles.  The site is called Sutton Hoo, from the Old English sūð-tūn hōh meaning “south[ern] farmstead [or enclosed roundhouse] on a heel [projecting ridge of land].”  Incidentally, it is to this period of history that the modern English language owes almost half of its words including many of the most common words of our everyday speech.

The Anglo-Saxon period is the time of English history that most fascinates me; its art, culture, society and, especially, its language.  The period saw the emergence of a shared cultural identity through a complex and ethnically mixed society that had to continually re-interpret itself to facilitate the inclusion of diverse ‘immigrant’ tribes that assimilated with the native post-Roman population of Britain.  The enormous significance of that sentence should not be underestimated when we look, today, at the concepts of Brexit, sovereignty, national identity, immigration, diversity and inclusion - but that is perhaps a discussion for another day!

Between 1938 and 1939, the owner of the Sutton Hoo site, Mrs Edith Pretty, invited amateur archaeologist Basil Brown to excavate the burial mounds.  When the importance of the site came to the attention of the British Museum, the excavation was taken over, much to Brown’s chagrin, by Charles Phillips OBE FSA of Cambridge University.  In early August 1939, two schoolmistresses - Mercie Lack and Barbara Wagstaff - were holidaying in East Anglia and visited the site.  Both were accomplished amateur photographers and so impressed were they with what they saw at Sutton Hoo that they asked for permission to stay and photograph the excavation. 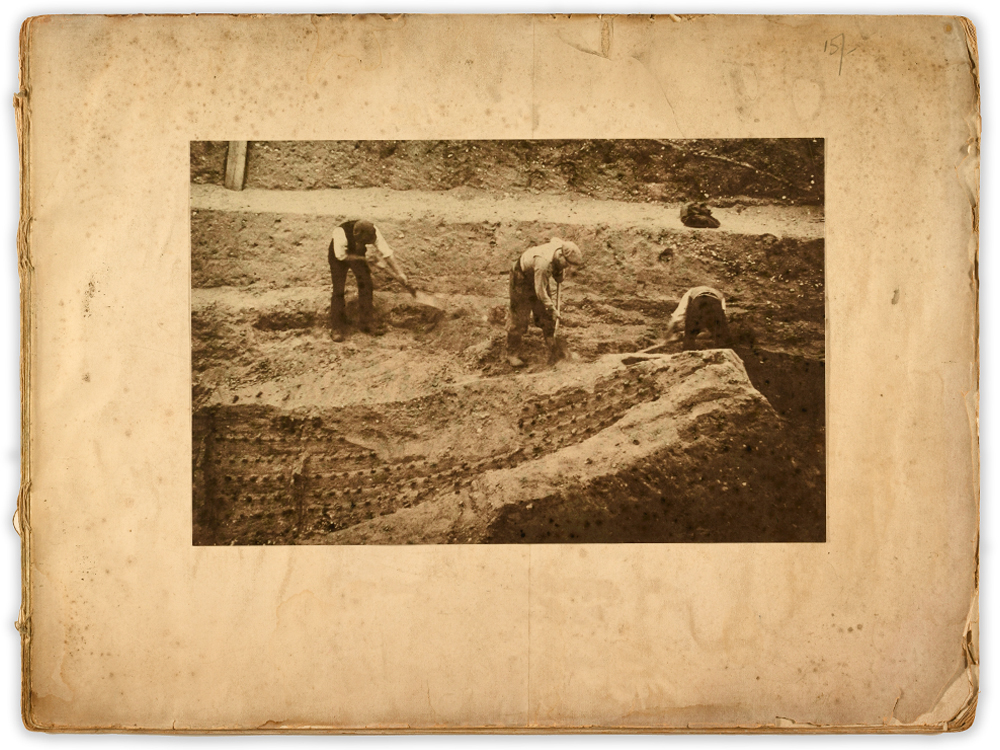 Between 9-24 August 1939, Lack and Wagstaff used their Leica cameras and black and white film to record every detail of what was obviously a ship burial.  Each also had a single roll of Agfa colour transparency film (which was briefly on sale in England before the outbreak of war) so, in addition to the approximately 450 black and white photographs, they each made about thirty colour photographs.  After the end of the war, Lack and Wagstaff submitted albums of their photographs to the Royal Photographic Society and each was awarded the distinction of Associate (ARPS):

“Thus it is hoped, that, by means of the photographic records taken on the site at the time, some idea of the process of uncovering the boat may be conveyed to later generations who cannot have the chance of seeing it emerge from its sandy grave.”  Mercie Lack ARPS

It is fitting that the excavation of the ship burial at Sutton Hoo was recorded for posterity by two women.  An important study of women in Anglo-Saxon England was published in 1984 and, according to the author of the study, Professor Christine Fell OBE, women were "near equal companions to the males in their lives … much more than in any other era before modern time … they were not only allowed to have private influence but also a wide liberty of intervention in public affairs.”

The recent Netflix drama of the Sutton Hoo excavation (“The Dig”, directed by Simon Stone, released 14 January 2021) starred Carey Mulligan as Edith Pretty and Ralph Fiennes as Basil Brown.  While the film rewarded amateur archaeologist Basil Brown with the recognition he so richly deserved, it is a great shame that Rory Lomax (a fictional cousin of Edith Pretty) replaced the very real contribution that two amateur photographers, Mercie Lack ARPS and Barbara Wagstaff ARPS, made to the recording of the excavation.  I hope this blog goes some way to addressing that injustice.

They placed in the barrow rings and jewels, / All such ornaments as erst in the treasure / War-mooded men had won in possession / The earnings of earlmen to earth they entrusted, / The gold to the dust, where yet it remaineth / As useless to mortals as in foregoing eras.

(main) A photograph of the Sutton Hoo ship burial, by Mercie Lack ARPS (with Barbara Wagstaff ARPS pictured left).  In the foreground is a copy of Antiquity Vol.XIV No.53 (March 1940) and The Sutton Hoo Ship Burial published by the British Museum (January 1947).  In the background is a copy of The Saxon Chronicle translated by Rev J Ingram (published in 1823).  The trowel is of a type popular with archaeologists before the Second World War; it was manufactured by William Gilpin, an English tool manufacturer in Cannock, north of Birmingham.  The firm operated two works, Churchbridge Works and Wedges Mills, from as early as 1834 to around 1946.

(inset) Photograph of the excavation of the ship burial at Sutton Hoo (August, 1939) by Mercie Lack ARPS.