Your web browser is out of date. Update your browser for more security, speed and the best experience on this site.
Find out more
We use cookies and similar technologies to optimise your experience when using this site, to help us understand site usage, and to tailor our advertising on third party sites. Read about Cookies and view our Privacy Policy at the bottom of each page on our website at any time.
A JavaScript execution error has occurred somewhere on this page. The page may not function as intended. Try refreshing before continuing.
Published 09 June 2021

William Henry Fox Talbot was a polymath, perhaps best known as one of the founding fathers of photography, alongside Johann Heinrich Schulze (1717), Thomas Wedgwood (circa 1800), Nicéphore Niépce (circa 1820), and Louis Daguerre (1839).  Talbot’s salted paper photographic process was the result of experiments he had begun in 1834.  However, it was not until a few months after Daguerre’s announcement (made without revealing any useful details) of his daguerrotype process in early January 1839, that Fox Talbot announced details of his process to the Royal Institution on 25 January 1839.

Over the next two years, Fox Talbot made improvements to his salted paper process which relied on ‘printing-out’ the image; the image would appear and become darker with progressively longer exposure to sunlight.  The most significant of these improvements was to create a process in which the image was made visible by ‘developing-out’ an otherwise invisible - or ‘latent’ - image on the exposed paper.  This improved process was called the calotype and was announced in 1841.

On Thursday 20 January 1853, at the inaugural meeting of what was to become the Royal Photographic Society, the office of first President of the Society was offered to the then fifty-three year old Fox Talbot.  When Fox Talbot declined the offer, Sir Charles Eastlake was unanimously called to take the Presidency, to which he duly agreed.  In his address, Eastlake paid credit to Fox Talbot and declared that the world was indebted to him “for the liberality with which he had thrown open his invention to the enterprise of men of science and to all amateurs and artists.”

The possible catalyst for Fox Talbot’s pursuit of a process of ‘photogenic drawing’ was perhaps the chance meeting he had with Sir John Herschel in Munich, in 1824.  Herschel, like Fox Talbot, was also a polymath and had interests of his own in the field of optics, chemistry and photography.  In 1839, Herschel coined the term “photography” and was the first to apply the terms “negative” and “positive” to the photographic process. 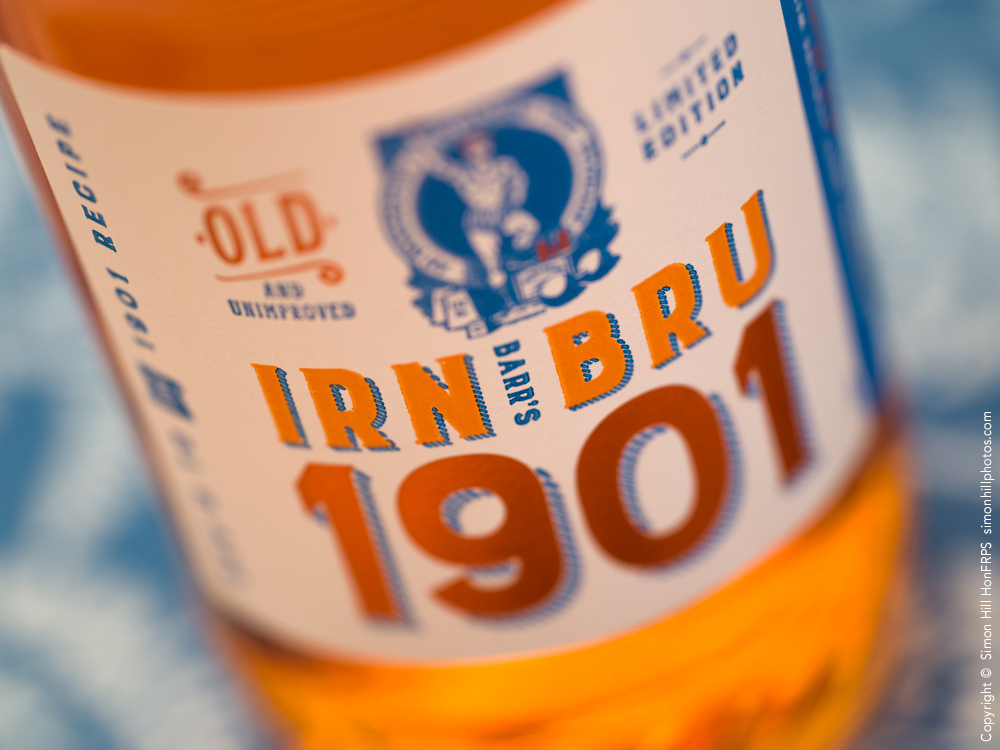 In 1842, Herschel invented his own process of making photographic prints.  He used ferric ammonium citrate (which as an acidity regulator is used in the Scottish beverage Irn-Bru) and potassium ferricyanide (a bright red salt used to harden iron and steel, and in the dyeing of wool).  Herschel called his process cyanotype and it produced negative prints of a vivid cyan-blue colour.  In fact, the contact-printing cyanotype process was used by architects and engineers well into the 20th century to produce ‘blueprints’ - a simple and low-cost method of producing copies of plans and drawings.

On 16 March 1799, Anna Atkins - botanist, illustrator, photographer and novelist - was born in Tonbridge, Kent.  Her father, John George Children, and her husband, John Pelly Atkins, were both friends of Fox Talbot and of Herschel.  Within a year of Herschel’s announcement of his cyanotype process, Atkins began to use it to create photograms (contact prints) of her collection of seaweed that she published as Photographs of British Algæ: Cyanotype Impressions in October 1843.  This was a landmark moment in the histories both of photography and of publishing.  British Algæ was the first book produced entirely by photographic means … the first photobook.  It is perhaps fitting then, albeit perhaps not quite a coincidence, that the Royal Photographic Society has chosen 9 June of this year, the 150th anniversary of Atkins’ death, to the day, for the announcement of the newest genre in its Distinctions programme … appropriately, that of the photobook. 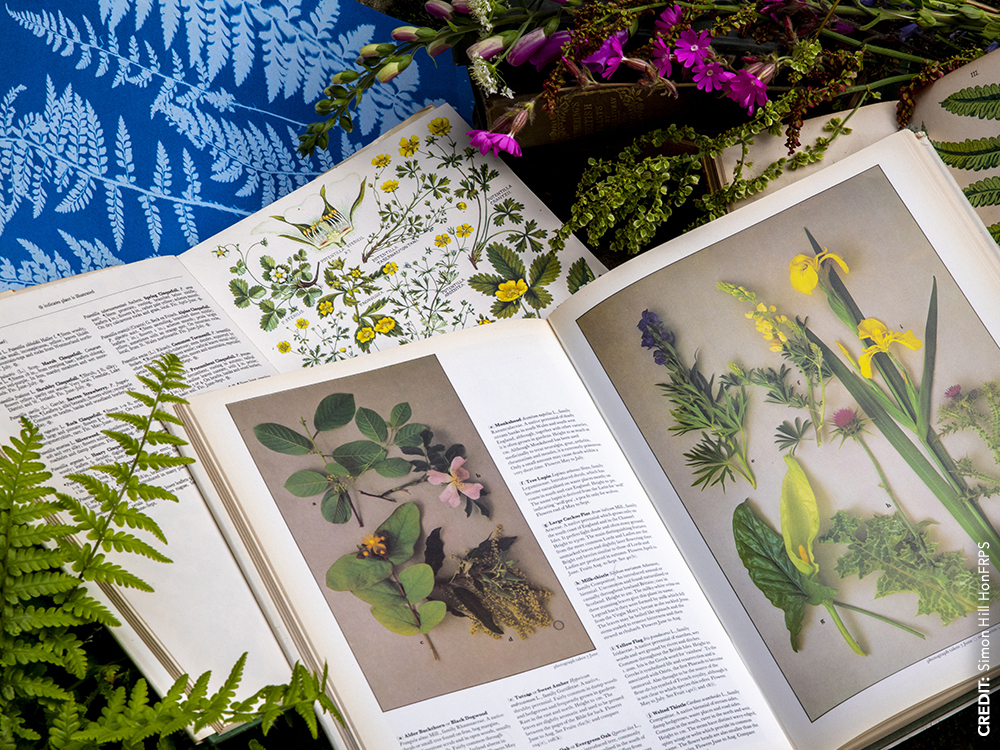 Atkins' innovative use of Herschel’s cyanotype process merged art and science.  The arrangement of her algæ specimens on the cyanotype paper was influenced as much by the rules of composition as by taxonomic science.  The influence of Atkin’s photograms can be seen in another botanical masterpiece, published 122 years later, in 1965.  The Concise British Flora in Colour was the result of 60 years of painstaking fieldwork and meticulous painting by the botanist, illustrator and parish priest, Reverend William Keble Martin, published in his 88th year.   Keble Martin’s original watercolour illustrations, together with his paint-box and microscope, are housed with three volumes from Atkins’ British Algæ in the collection of the Linnean Society of London (founded in 1788), the world’s oldest active society devoted to natural history.

Perhaps the contemporary ‘Anna Atkins’ is botanic photographer Roger Phillips.  His first book, Wild Flowers of Britain published in 1976, is a photographic guide to the identification of over 1000 species of wild flower.  The arrangement of his botanical specimens owes much to the style used by Keble Martin and his, in turn, owes much to the pioneering work of Anna Atkins, arguably the first woman photographer and certainly the first person to produce a photobook.

(main)  Anna Atkins died on 9 June 1871.  Today, 150 years after her death, her remarkable cyanotypes continue to have enormous artistic appeal.  Pictured are three volumes (in later bindings) of Photographs of British Algæ: Cyanotype Impressions (1843), widely considered to be the first work illustrated with photographic images - the first 'photobook'.  Pictured with the 2017 Princeton Architectural Press publication of a set of 12 notecards which also includes reproductions from Atkins' later works (produced with assistance from her friend, Anne Dixon), Cyanotypes of British and Foreign Ferns (1853) and Cyanotypes of British and Foreign Flowering Plants and Ferns (1854).  In the background is a Robey & Company (of Globe Works, Lincoln) cyanotype 'blueprint' for a boiler to be used on a 5 ton steam wagon.  Atkin's hand lens and a later field microscope are also pictured.

(inset, top)  The popular Scottish soft drink, Irn Bru, was first manufactured in 1901.  On 22 March 2021, 120 years after its introduction, the manufacturers announced that the drink would now be made to the original '1901' recipe.  The ingredients of Irn Bru include ferric ammonium citrate, an essential chemical used in the cyanotype photographic process.

(inset, bottom)  Most of the photographs in Roger Phillips' Wild Flowers of Britain (1976) were taken on a large format sheet film camera.  The arrangement of specimens for each plate in Phillips' encyclopaedic reference guide is not unlike those used by Anna Atkins in her groundbreaking photobook.  Also pictured is a first edition of Keble Martin's Concise British Flora in Colour (1965), the original watercolour illustrations of which are archived alongside the works of Anna Atkins in the collection of the Royal Linnean Society of London.  On the righthand edge of frame is a copy of the hand-coloured publication British Ferns and their Allies by Thomas Moore (1821-1887), a Fellow of the Linnean Society.  In the background is a modern reproduction of Atkins' "Ferns: Specimen of cyanotype" from the National Gallery of Art, Washington DC.

Congratulations to Professor Ralph Jacobson HonFRPS, Past President of the RPS (2005-2007), for winning my 'Facebook Challenge' by correctly identifying the link between Irn Bru, the cyanotype and Anna Atkins' pioneering contribution to the development of the photobook.  His prize is a complimentary bottle of the Scottish "ginger nectar".