Your web browser is out of date. Update your browser for more security, speed and the best experience on this site.
Find out more
We use cookies and similar technologies to optimise your experience when using this site, to help us understand site usage, and to tailor our advertising on third party sites. Read about Cookies and view our Privacy Policy at the bottom of each page on our website at any time.
A JavaScript execution error has occurred somewhere on this page. The page may not function as intended. Try refreshing before continuing.
Published 22 March 2021

“Kodachrome is more than a film, it’s a pop culture icon,” wrote Todd Gustavson, curator at George Eastman House museum in Rochester, New York.  The first Kodak product to bear the name Kodachrome was invented in 1913 but it was a later product, introduced in 1935 (movie) and 1936 (stills), that would make the legend.

While still in their teens, student musicians and amateur photographers, Leopold Godowsky Jnr and Leopold Mannes, set themselves a challenge to create a colour film that was superior to colour films of the day.  They worked for years, first in their parents’ bathrooms, later in rented offices and hotel rooms.  In 1931, they joined the Kodak laboratory where they gained a reputation for some unconventional methods, including the timing of their film processing by whistling the final movement of Brahms’ Symphony No.1 in C minor!

Godowsky and Mannes developed a revolutionary approach to colour film technology which added colour dyes to the image during processing.  This resulted in an image with colour saturation and sharpness that became the hallmark of Kodachrome photography.  Within little more than a decade of its launch, Kodachrome became the film of choice for almost every photographer at National Geographic and it remained a favourite for decades after.

In a Vanity Fair interview in 2011, Magnum photographer Steve McCurry HonFRPS described this unique quality: “If you had good light and you were at a fairly high shutter speed, it was going to be a brilliant colour photograph; Kodachrome had more poetry in it, a softness, an elegance.”  McCurry’s 1984 photograph of green-eyed Sharbat Gula - known to everyone as “Afghan Girl” and perhaps the most recognised photograph of all time - was shot for National Geographic on Kodachrome film.

On 22 June 2009, with the advent of digital photography and the inevitable decline in film photography, Kodak announced the end of Kodachrome.  McCurry was given the last roll of Kodachrome to come off the production line, which he shot and hand-delivered to the only remaining processing facility, Dwayne’s Photo in Parsons, Kansas, USA.  Those final days of Kodachrome are themselves the stuff of legend and will be the subject of a later edition of this blog. 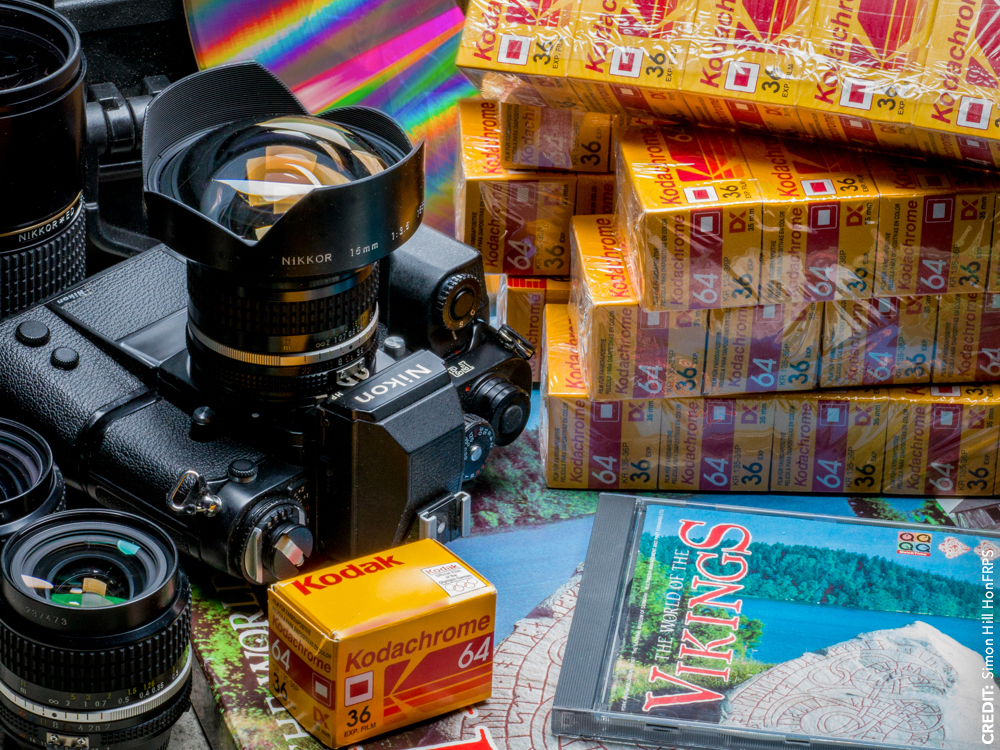 In the early 1990s, I had an assignment to photograph thousands of Viking age sites and artefacts across the Viking world for publication in print and as a Laserdisc encyclopædia (later republished as a CD-ROM and now available as an online academic resource); I travelled from Iceland and Greenland in the west to Novgorod and Kiev in the east, from Arctic Norway in the north to Istanbul in the south.  The entire assignment was shot on Kodachrome film so, for the duration of the project, I kept a stock of a thousand rolls of film stored in three fridges in the corner of my office.  For each trip, I would fill four ‘Peli’ cases with Kodachrome (and an extra ‘Peli’ case for my Nikons) before heading for the airport.

The World of the Vikings was the last major project that I shot entirely on Kodachrome and I still have around 100 rolls of unexposed, process paid (!) films, with an expiry date of exactly 25 years ago this month.  Why do I keep stocks of a film that can no longer be processed for colour slides?  Pure nostalgia: my dad used it, I used it, and during the 1990s and the early 2000s it was used by almost every professional photographer I knew - and we all loved it!

Nostalgia for this iconic product reaches into many spheres: Kodachrome is the only film to have a song written about it (Kodachrome, Paul Simon, 1973) the lyrics of which include the foreboding, “Mama, don’t take my Kodachrome away”; a state park named after it (Kodachrome Basin, Utah, USA) originally named Kodachrome Flat in 1948 by photographers from National Geographic but, fearing complaints from Kodak, the name was changed to Chimney Rock before being officially named Kodachrome Basin a few years later; and a feature film loosely based on the final days of the legendary slide film (Kodachrome, starring Ed Harris, Jason Sudeikis and Elizabeth Olsen, 2017) inspired in part by the New York Times article “For Kodachrome Fans, Road Ends at Photo Lab in Kansas” by A G Sulzberger (2010).

(inset) Cellophane packed boxes of Kodachrome pictured with the World of the Vikings (1991) laserdisc and CD-ROM, and a Nikon F3 with a Nikkor 15mm f/3.5 ultra-wide angle and other lenses.