Your web browser is out of date. Update your browser for more security, speed and the best experience on this site.
Find out more
We use cookies and similar technologies to optimise your experience when using this site, to help us understand site usage, and to tailor our advertising on third party sites. Read about Cookies and view our Privacy Policy at the bottom of each page on our website at any time.
A JavaScript execution error has occurred somewhere on this page. The page may not function as intended. Try refreshing before continuing.
Published 08 March 2021

My chance find of an archive press photograph for sale on Ebay has introduced me to a group of women who shattered male domination of war reporting.  The photograph is of a young woman brushing her hair, dressed in military fatigues, with a camera round her neck.  The woman is anonymous but on the reverse is the caption, “Ma’am, what are you doing here?”

The camera is a Minolta SRT101 with, unusually, a black shutter speed dial.  The black dial suggests that it was manufactured between 1966 and 1969, right in the middle of the Vietnam War (1955-1975).  A Google search found several photographs of the same woman with the same Minolta camera.  Only one was captioned and this included the name, Jurate Kazickas.

Another Google search showed that a woman with this name is the President of an education foundation with offices in Vilnius (in her native Lithuania) and New York.  I sent an email to the foundation and, within 24 hours, received a reply from Jurate Kazickas confirming that she is indeed the woman in the photograph and that it was taken in Vietnam.

Working in the US as a writer for Look magazine, Kazickas had entered a TV game show and won $500 in prize money.  Although only 24 years old, Kazickas used her prize money to buy a one-way ticket to Saigon.  On arrival, she gained a press card that allowed her to travel on military transport, “Once you’d got your press card” she said, “you were free.”

Kazickas was following in the footsteps of earlier women war correspondents, including those of Dickey Chapelle.  Chapelle started her career during the Second World War as a photojournalist for National Geographic.  One of her first assignments was the Battle of Iwo Jima.  She was featured in the 2011 documentary film, No Job for a Woman, about the work of women journalists during the Second World War. 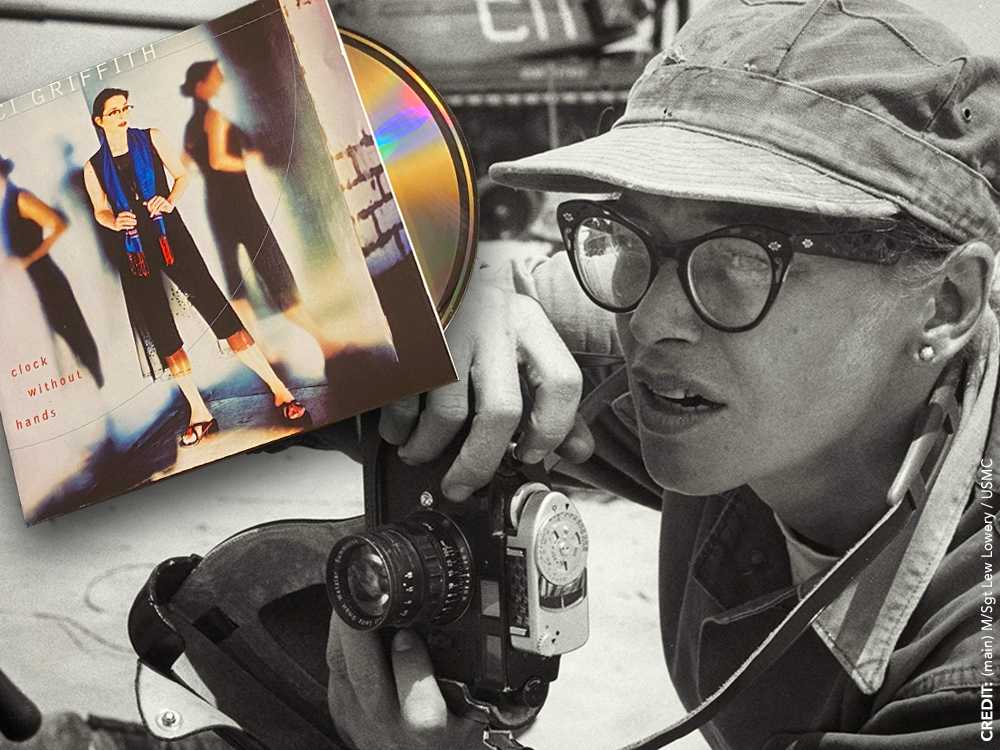 Displaying exceptional courage and enterprise, Chapelle travelled the world going from one war zone to the next.  Despite the dangers, she was relentless in her ambition to photograph the human cost of war.  During the Hungarian Revolution (1956) she was captured and imprisoned for seven weeks but, as soon as she was released, Chapelle went back to work.  Sadly, only nine years later, a far worse fate would befall her.

On 4 November 1965, in Vietnam’s Quang Ngai Province, Chapelle was moving forward with a platoon of US Marines when they hit a boobytrap.  A tripwire detonated a hand grenade attached to a mortar shell and Chapelle was hit in the neck by a piece of shrapnel.  The final moments of her life, as she received last rites, were captured by her colleague, combat photographer Henri Huet.

Chapelle was the first female war correspondent to be killed in Vietnam and the first American female reporter to be killed in action.  Her body was repatriated and she was given a full Marine Corps burial.  There have been many commemorations of her life but perhaps none more poignant than the Nanci Griffith song, Pearl's Eye View (The Life of Dickey Chapelle) from the album Clock Without Hands (2001) which includes the lyric “Now we trace her wings / In her footsteps without fear.”

The work of the 70-or-so women journalists that covered the war in Vietnam helped to ensure that, by the time of the Gulf War (1990-1991), gender had ceased to be a barrier to enter this previously male-dominated world.  It has been estimated that more than half the journalists who covered the war in Iraq were women and they were responsible for some of the most memorable despatches and iconic photographs from the front line.  It is to Kazickas and Chapelle, and to so many of their contemporaries, that women war correspondents today owe such an enormous debt.

(main) An archive press photograph of Vietnam war correspondent Jurate Kazickas, with an early series Minolta SRT101 camera and boxes of Kodak Tri-X pan film. Kazickas recalled, “I sold all my photos to the Associated Press. They paid $25 per picture if I recall and as a freelance writer, that income was very welcome.  And they provided us with loads of free Tri-X film!”  The background is a US Army Corps field map of Chu’o’ng Nghîa, Vietnam, 1969.