Your web browser is out of date. Update your browser for more security, speed and the best experience on this site.
Find out more
We use cookies and similar technologies to optimise your experience when using this site, to help us understand site usage, and to tailor our advertising on third party sites. Read about Cookies and view our Privacy Policy at the bottom of each page on our website at any time.
A JavaScript execution error has occurred somewhere on this page. The page may not function as intended. Try refreshing before continuing.
Published 18 October 2020
Avijit Datta FRSA FLS FPhys Deputy Chair, Contemporary SIG

This is the tenth blog in a series on COVID-19 and lockdown, edited by contemporaryweb@rps.org and contemporarydeputy@rps.org

Teaching Young people to express themselves via photography during a pandemic

Based on an interview with Carolyn Mendelsohn by Avijit Datta

In March of this year, prior to lockdown, I wrote an article in Contemporary Photography (Volume 79, Spring 2020, page 38) exhorting RPS members to teach photography to young people, particularly those from disadvantaged backgrounds. The Royal Society for Arts, Manufacturers and Commerce commissioned a three-year investigation, Learning About Culture, on how cultural learning interventions can improve attainment levels for disadvantaged children - the UK’s largest ever study of cultural learning.

I was therefore delighted to learn that a friend, Carolyn Mendelsohn, had independently been teaching children aged 13 -18, including those from disadvantaged backgrounds in Inner city Bradford during lockdown, which was funded by the local council RESPONSE grant. I was particularly interested in her project because I had previously been a Trustee of an Arts organisation in Bradford that was active in teaching music and dance to the children of the South Asian diaspora. Bradford Council had issued a statement saying “The package of support launched by Bradford Council to help the creative arts and cultural sector is aimed at harnessing the power of the sector in helping to reduce social isolation and improve residents’ health and wellbeing […] the Council’s new grant programme will support the creative sector with innovative ideas and activities to help residents to connect with each other without leaving their homes and build on their sense of community, through various accessible platforms such as YouTube, podcasts and live-streaming”.

I therefore arranged to interview Carolyn via Zoom to learn how the project was conducted so that RPS members might replicate her project worldwide.

AD:  What motivated you to start the project during lockdown?

CM:  I have teenage children aged 14, 16 and 19 and could see the effect of lockdown on them and felt very strongly that the ‘voices’ of teenagers during lockdown were not being heard. Furthermore, some of my pre-lockdown work was in abeyance.

AD:  How did you recruit the young people?

CM:  I posted a flyer (see below) via Facebook, Twitter and Instagram asking for parental agreement. The entry criteria were that they had no prior photographic experience, lived in the Bradford District and they had a mobile telephone that could take photographs. 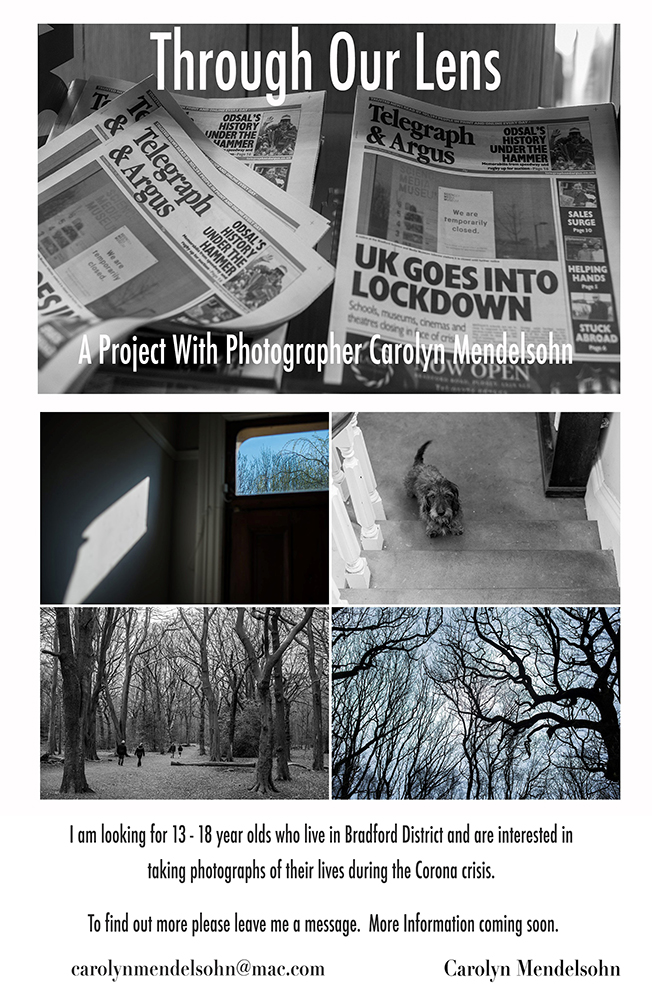 AD:  In Bradford there is a high index of deprivation, a large BAME population with 20.3% self- reporting as Pakistani and 24.7% self-reporting as Muslim. To what extent were the recruited young people from those and other potentially disadvantaged backgrounds?

CM:  A total of forty students were mentored. The first group of eighteen students were predominantly white, middle-class. In subsequent groups, eight refugees were recruited including one from Somalia; some of whom had only arrived six months earlier in the UK, sometimes without any other family members. The project assisted their integration into the UK. One student had Downs and another autism. The second group of students also had access to English support delivered by an ESOL teacher.

CM:  I had formal lesson plans to cover issues such as composition, light, the rule of thirds, the difference between self-portraiture and ‘selfies’  etc., and showed the students examples of how it has been done by famous photographers. In addition, I covered genres each week such as portraiture, landscape, and documentary. They were set themes such as All about you and An object that is important to you. The students then spent the next week taking photographs. Although there was a brief, the students were free to take whatever picture they wished. We would review the photographs together at the next Zoom session. In addition, images would be uploaded to the project Instagram page and other photographers would give constructive feedback, which was supportive and often positive.

AD:  What problems did you encounter?

CM:  Technical issues: the internet failed a couple of times, the sound on Zoom failed. One person dropped out of a session. I tackled this on the next session by using empathy, making the students feel important and by saying “we missed your work”.

AD:  What help did you receive?

CM:  I was lucky to have an intern who happened to be a photography graduate. She was very helpful. An ESOL teacher gave English support where needed.

AD:  Obviously each image was important to the individual student, but which were your favourites?

CM:  Hamza produced a powerful image of a hand. Harry’s photograph of themself curled up on the messy bedroom floor was arresting and has been reproduced widely.

AD:  What were the benefits of the project apart from teaching students?

CM:  1. The project generated a sense of community – that was mutually beneficial to counteract loneliness during lockdown. Students commented in evaluation forms that the Zoom sessions were the highlight of their week, to some extent it was mine too!

2. The act of expressing their feelings via photography, helps develop mindfulness, understanding of their feelings and all the attendant benefits. It also gives a ‘voice’ to the marginalised and invisible in society.

3. The Instagram site for the project fostered that sense of community. Notable photographers including Roy Mehta, Jill Edelstein, Jim Mottram, Alice Tomlinson and Barry Lewis visited the site and gave positive feedback to students which was tremendously well received. Other followers of the site were Bradford 2025 (Bradford is bidding to be European city of culture in 2025), Bradford museums and the Impressions Gallery.

4. Large billboards of fifty students’ images were put up in the streets of Bradford district.

5. Supportive international emails have been received and shared.

7. There will be a public exhibition in the Impressions Gallery.

8. The project has been featured on BBC TV, local newspapers and Huffington Post.

AD:  Given all the benefits of this teaching project, how do you see the project developing in the future?

CM:  I’d like the project to spread elsewhere, hopefully internationally. I can’t do that myself, so the help of others would be needed.

AD:  Thank you, Carolyn. Given that the RPS mission statement says  that “it exists to increase the knowledge and understanding of photography, to promote the highest standards of achievement in photography, and to encourage the public appreciation of photography”, this is something we will encourage RPS members to emulate and persuade the RPS to consider supporting. As a doctor, I’m also impressed by the mental health benefits of your group teaching sessions: the centre for Mental Health estimated that a fifth of the population will need mental health support as a result of COVID-19 and lockdown, of which one and a half million are children. Improving children’s mental health is also a major international focus for UNICEF. The next blog in the series by Sally Greenwood ARPS will focus on the mental health benefits of photography for adults during lockdown.