Your web browser is out of date. Update your browser for more security, speed and the best experience on this site.
Find out more
We use cookies and similar technologies to optimise your experience when using this site, to help us understand site usage, and to tailor our advertising on third party sites. Read about Cookies and view our Privacy Policy at the bottom of each page on our website at any time.
A JavaScript execution error has occurred somewhere on this page. The page may not function as intended. Try refreshing before continuing.
Published 23 January 2021 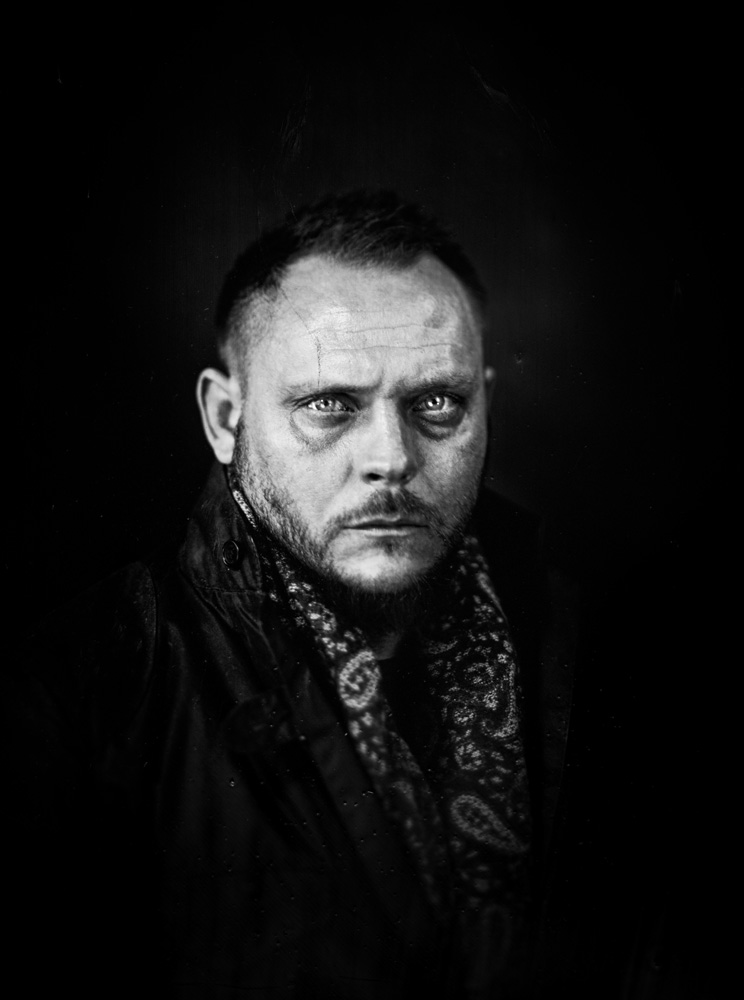 This is the twenty first blog in a series on COVID-19 and lockdown, edited by contemporaryweb@rps.org and contemporarydeputy@rps.org 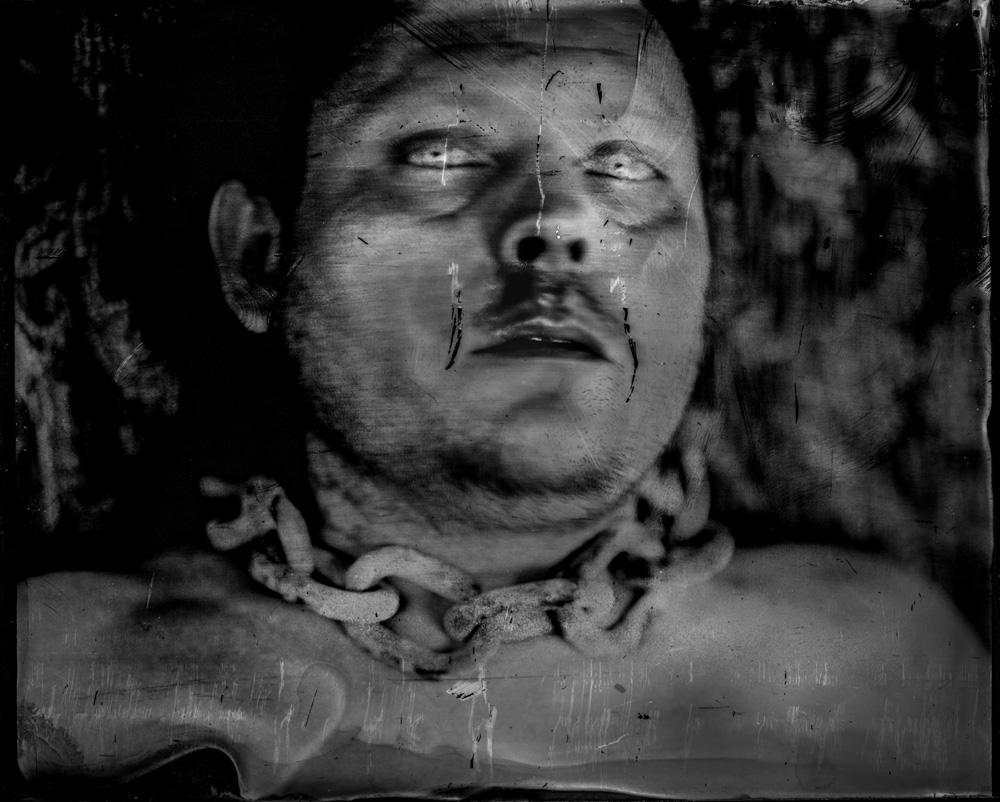 I shot my first wet plates in the initial month of COVID-19 Lockdown, I felt completely chained and bound to my anguish, as if on a plane between life and death in the same instant.  My relationship with my fiancé had broken down and previous mental health battles re-emerged with vibrant intensity.  One struggle surrounded losing my father and how I last saw him.  I was first on scene and subsequently worked on him in response to his fatal heart attack in 2016.  I was a disjointed frame of negativity and I desperately wanted to escape everything.

I was also toiling with self-appreciation which stemmed from being diagnosed with Type One diabetes two weeks after I was accepted for basic training in the RAF at eighteen.  This, coupled with a lack of purpose, rendered me rapidly spiralling out of control.  I needed to take immediate action and so I picked up some of my broken large format cameras and built a functioning 8x10 inch monorail.  I organised my chemicals to shoot wet plate collodion.  It is undoubtedly one of the most challenging photographic disciplines that one can practice, and I found it to be incredibly immersive and cathartic.

I embarked on a self-portrait wet plate series, using sub-standard equipment in a cold and wet garage at my home in the Scottish Highlands, I secluded and isolated myself from humanity.  I would grow my skills here, explore my inner psyche and pull no punches in disclosing the sheer raw-grit of my emotions – captured in silver and light.  When I visualise that time now, I imagine I am in the thick of a very dark storm, sheltering in a cave, only to emerge when I had gone through this inner battle with myself.

Soon, I realised that people were connecting with and appreciating the plates that I had posted on social media.  I decided to unleash ‘MentalCollodion’ – a project to inspire positivity and awareness in terms of mental health. 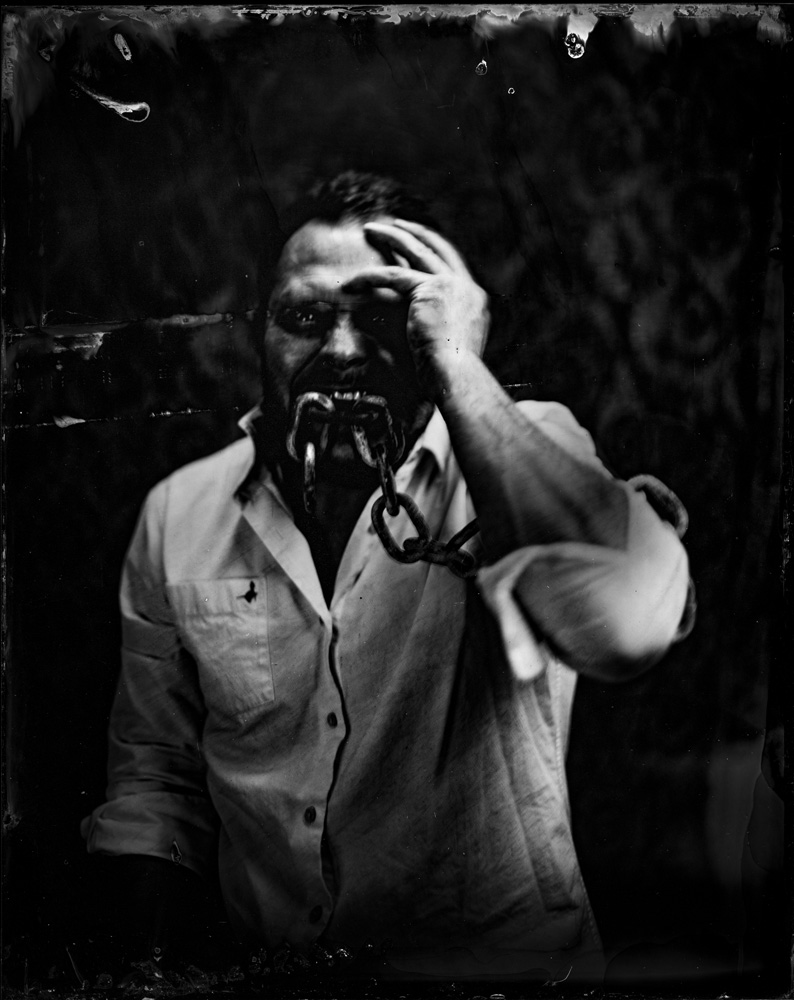 I opened the series by capturing emotions relating to antidepressants.  For many people there is an immense amount of stress involved with the subject.  The metallic taste.  The anxiety involved with making the decision to take them, or not. The anxiety involved with coming off them.  Personally, I have been in this situation, holding off for as long as possible before agreeing to start a course of medication, being so anxious to swallow the first tablet, feeling incredibly vulnerable and weak, at your breaking point.  I worried whether I could cope without them. 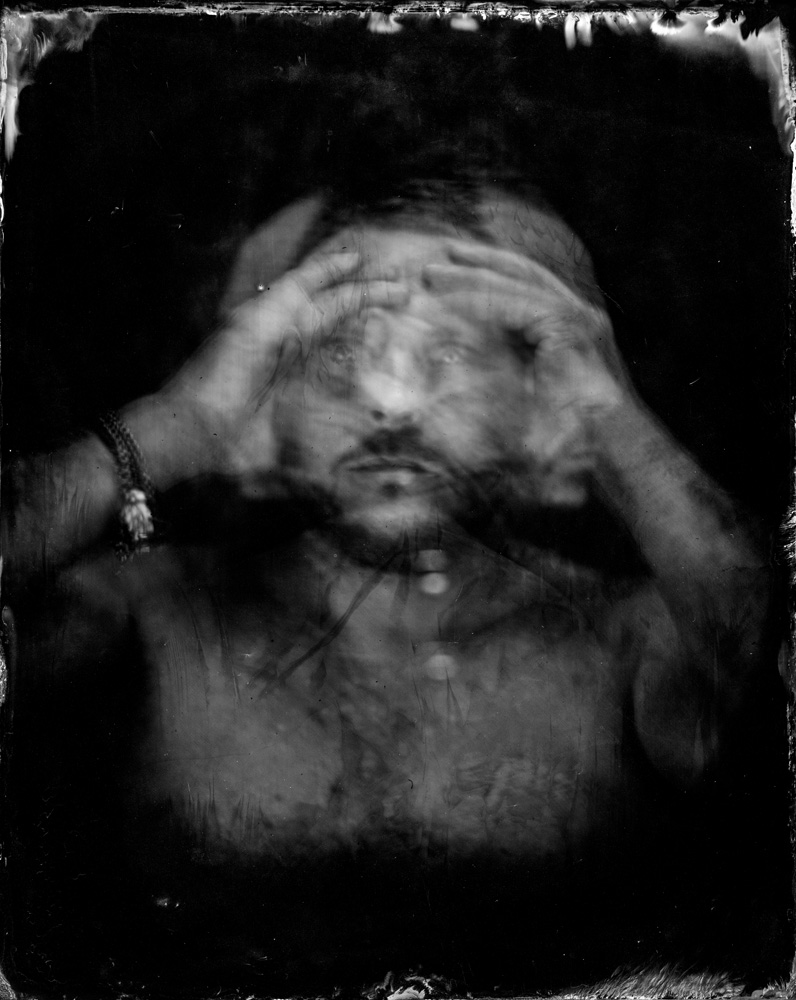 As I progressed along my journey, I started to construct a picture of what I was suffering with and why.  I struggle to stay focused in the present time, my past pulls me one way and the future pulls me in the other.  I took up meditation and now practice mindfulness to combat this.

I shot a triple exposure plate representing paranoia and self-doubt to mark a place in these three times.  Being in a hypersensitive, hypervigilant state of mind is exhausting! 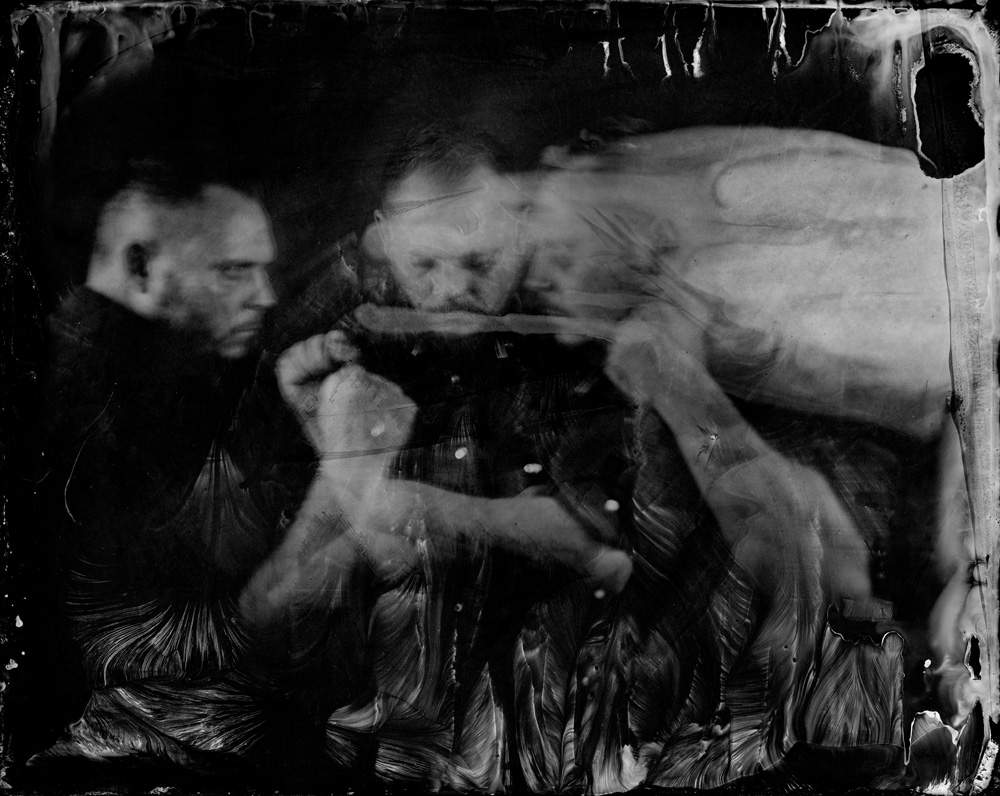 I embraced the challenge of shooting triple exposures, the process offers a great deal of creative release, it is very technical.  I’ve been on with the technical aspects and limitations of the substances involved.  The chemicals were drying out, as the plate took about 6 minutes to expose, approaching the time when the chemicals would not develop.  I addressed the need to step back and recognise that feelings are temporary and sometimes we need to pay no attention to our inner battles, instead we need to practice mindfulness and remain emotionally intelligent, until such a time as the battle subsides and we can experience calmness.  Here, I am paying no attention to the past and future selves. 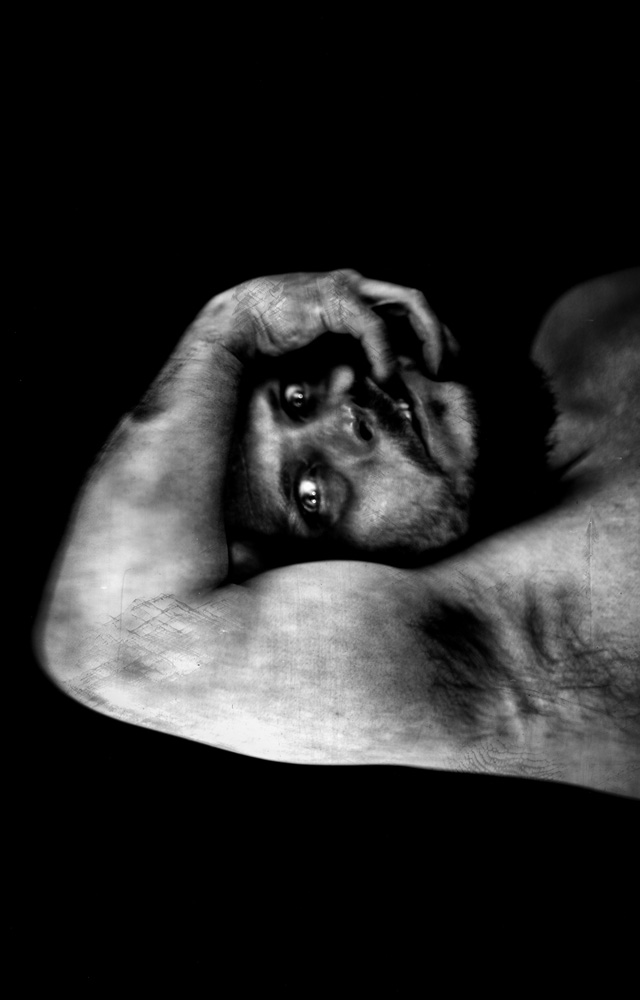 I also explored the reluctance to be comfortable in our own skin and bodies.  We struggle with our physical appearance and often compare ourselves to others in futile battles.  These battles can often result in self-harm, which is somewhere we should never, ever have to go.  I have been driven to this myself.  I won’t go back to that.  It’s a choice.  Someone once shared that they often had thoughts of wanting to rip and tear their face off.  These are dark thoughts and they need to be shared to start healing the mind.  I shot a contorted plate that depicts unrest in my body, something so incredibly special and unique.  I hope that people can connect with these plates positively.  I shoot honestly, the plates represent absolute truth. 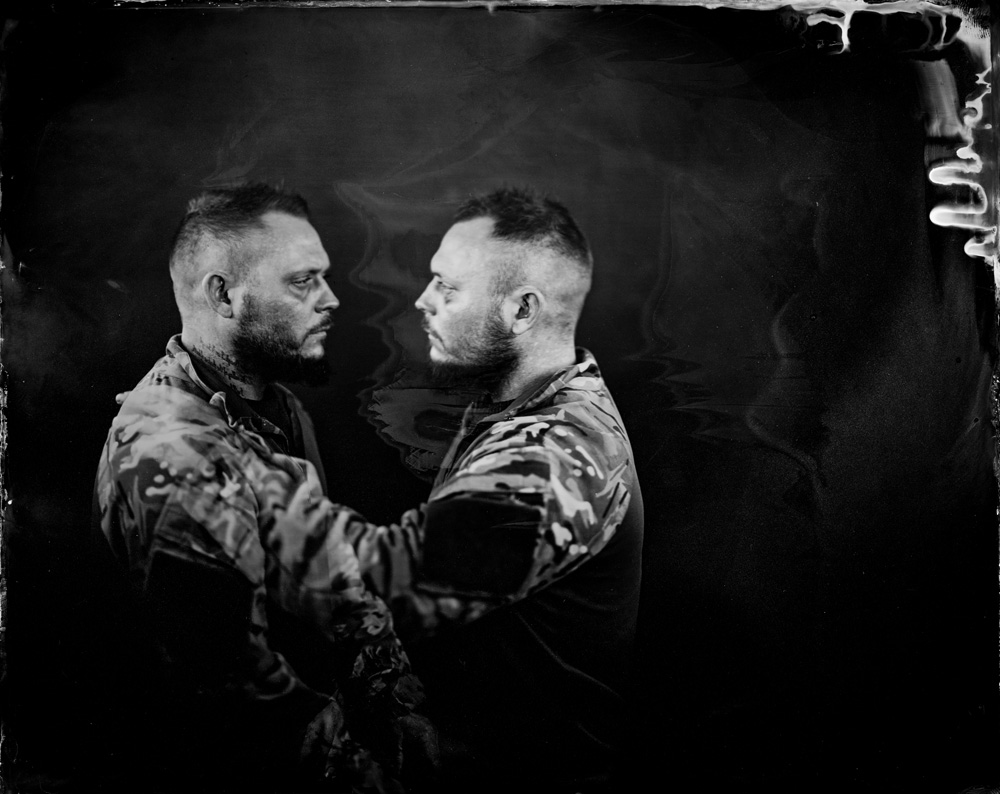 I was becoming self-aware, the techniques and tools that I was being taught were working.  I was healing.  I received some lovely feedback from people who saw my work.  This, in turn presented the opportunity to open the project further.  I explored the potential to request funding that would allow me to convert a van into a dark room and travel to people to shoot their mental health portrait. 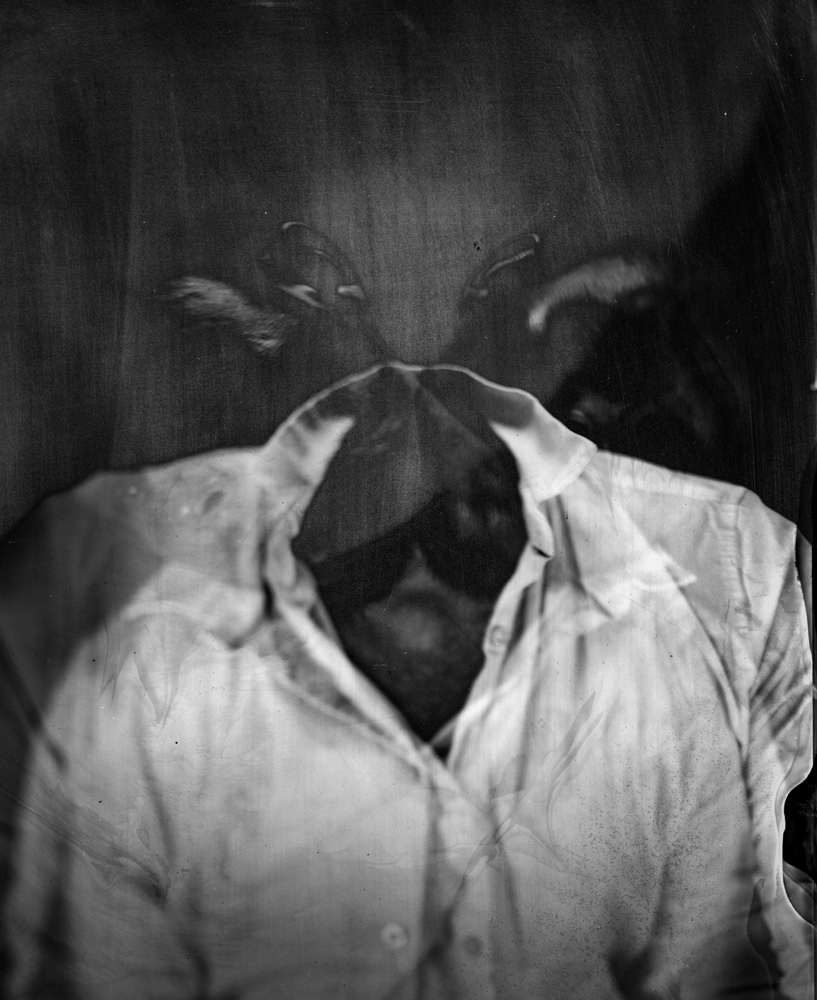 Throughout progression, there can be the occurrence of perceived failure, we can stagger.  It is in these times we need to dig deep and embrace the indomitable spirit of ourselves as humans.  I was experiencing terrible flashbacks that would literally leave me on the floor.  I was being torn apart, my mind, body and soul no longer interconnected.  Unexpected loud noises would make me take cover.  To document these flashbacks, I shot a plate where depression appears on one side, whilst anxiety exists on the other side, there is nothing in between.  It is an inner tear.

As I regained momentum and delved further into therapy, I realised that the small steps I’d been making suddenly equated to being at the top of a mountain, where summiting offered inner peace.  I had come through so much, and now it was done.  I was so elated and positive.  To mark this time, I shot what ended up being a series of three plates, all double exposures that represent an awakening and epiphany.  I made the conscious decision to practice self-love.  After decades of abuse and harm, I recognise the need to stop punishing myself and embrace who I am. 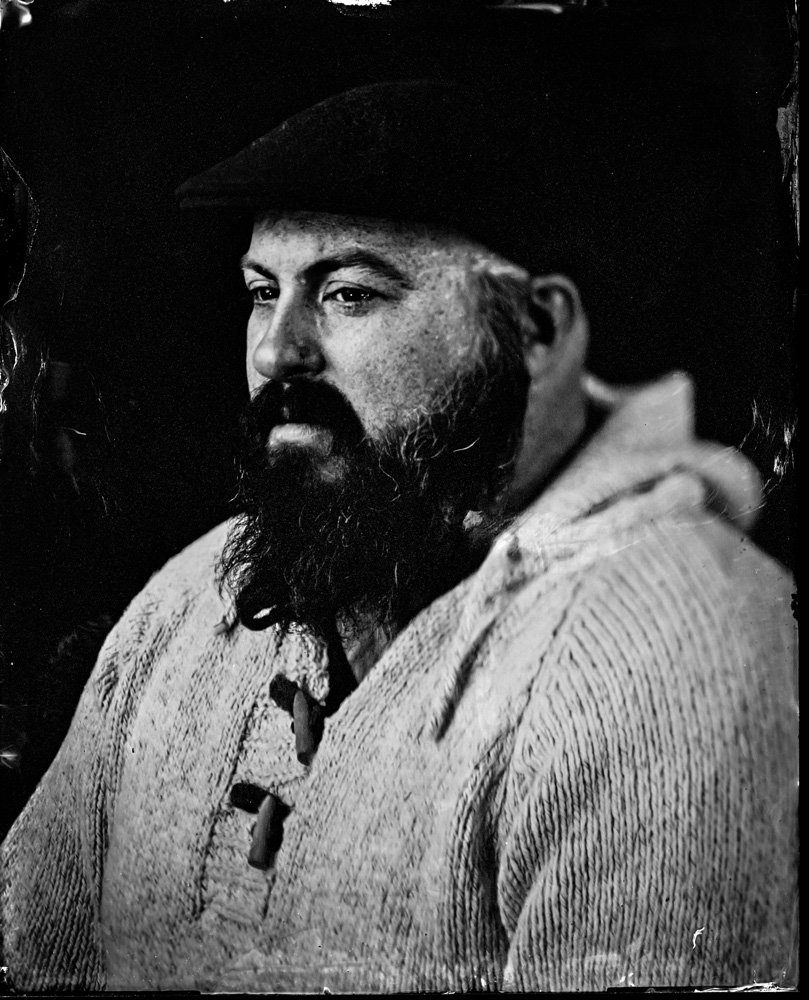 People came to the studio to share some time and sit with me.  These experiences were incredibly positive for us all and resulted in me submitting an application to expand and continue this work for funding to Creative Scotland. 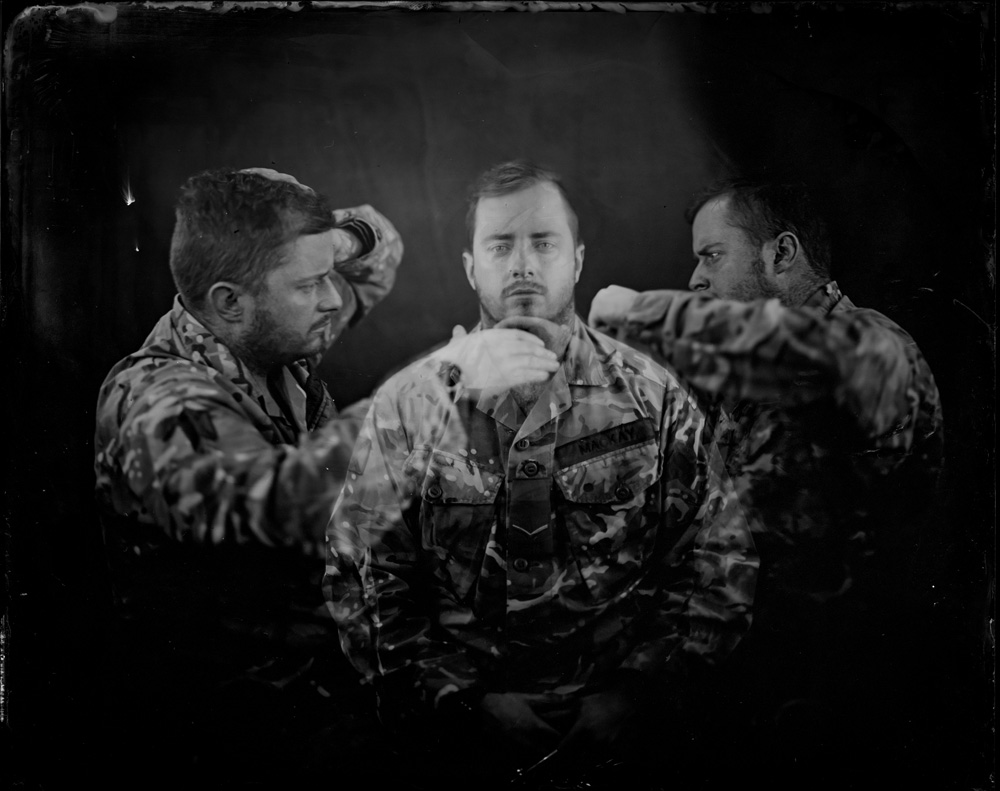 Hugh is a British Army Soldier and a fantastic advocate for mental health and well-being.  In his plate we wanted to create a comparison between the centred person who is peaceful and in control.  The centred Hugh is disallowing the demon’s access to disrupt his peace.  The Demons threats are of no significance. 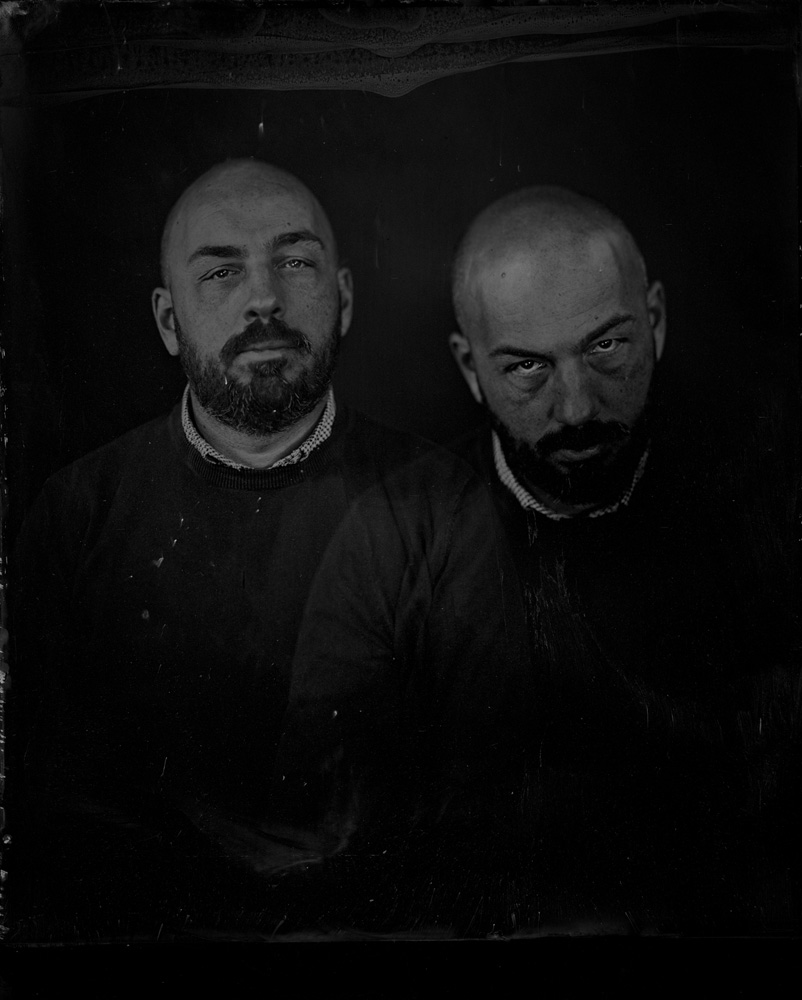 Keiron’s plate represents the duality of our psyche.  What we see on the outside rarely gives us any insight into what a person is truly feeling and experiencing.  This plate holds particular significance to me.  Shortly after publishing this, Keiron’s estranged daughter had seen the post on Instagram and put a lovely message on, thereafter contacting her father to reconcile and reconnect, “Love you Dad”, said it all to me. 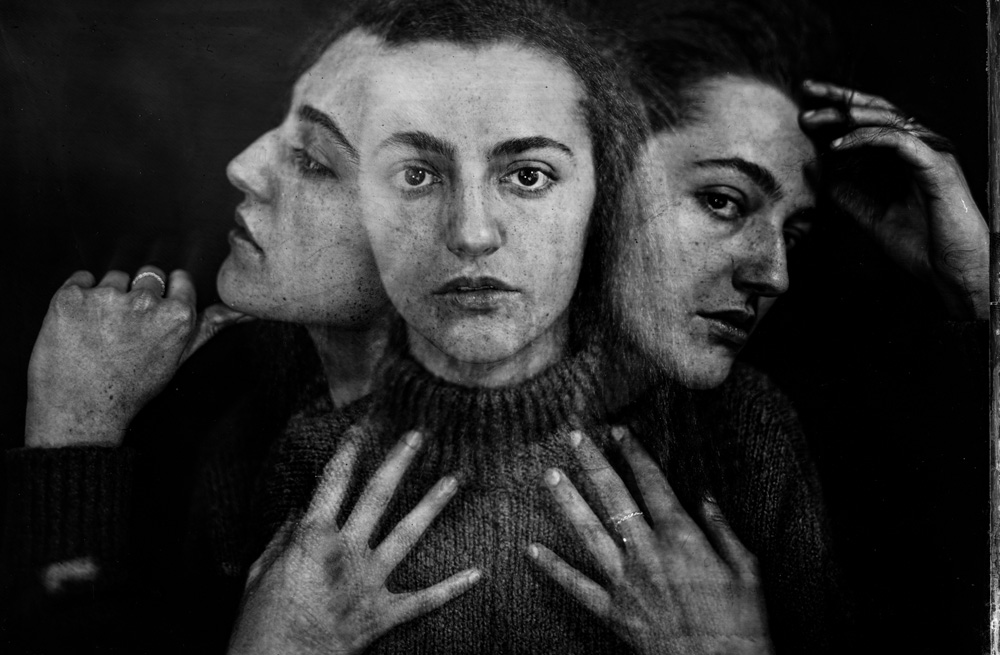 Lucinda describes our triple exposure thusly: “There’s vulnerability in the central portrait, which is most visually defined. The others have a sense of strength and power in them. They are only showing half the faces, and the hand positions are opposite to the central image which is baring all.” 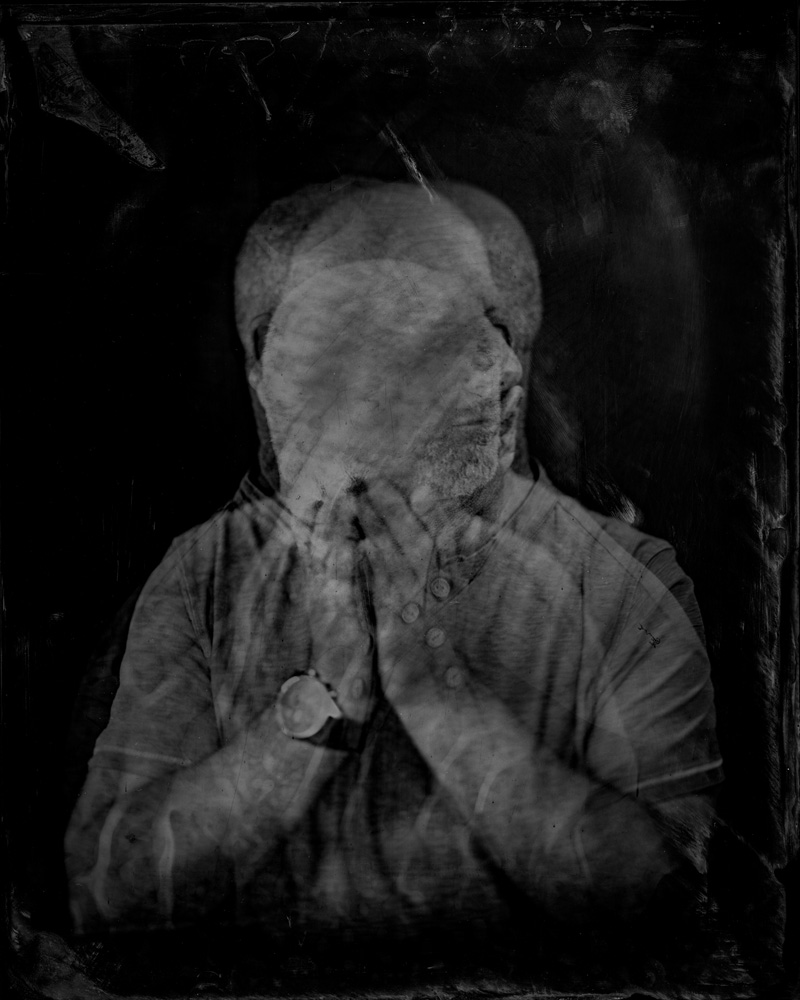 Terry is a British Army Veteran.  His plate encapsulates the feelings of anxiety and hyper-vigilance.  We have this in common and I could relate to the rift of never truly being able to relax and let one’s guard down. 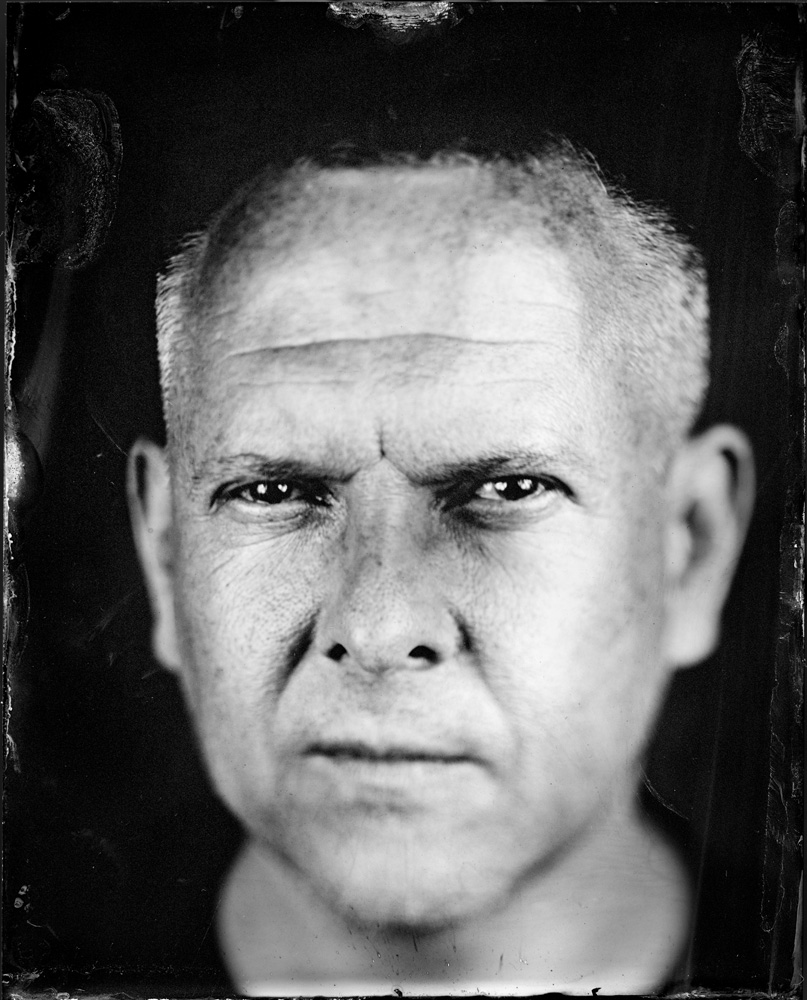 Martin is a British Army Veteran.  Our session together was every bit as healing for me as it was for him, our session lasted an entire weekend. 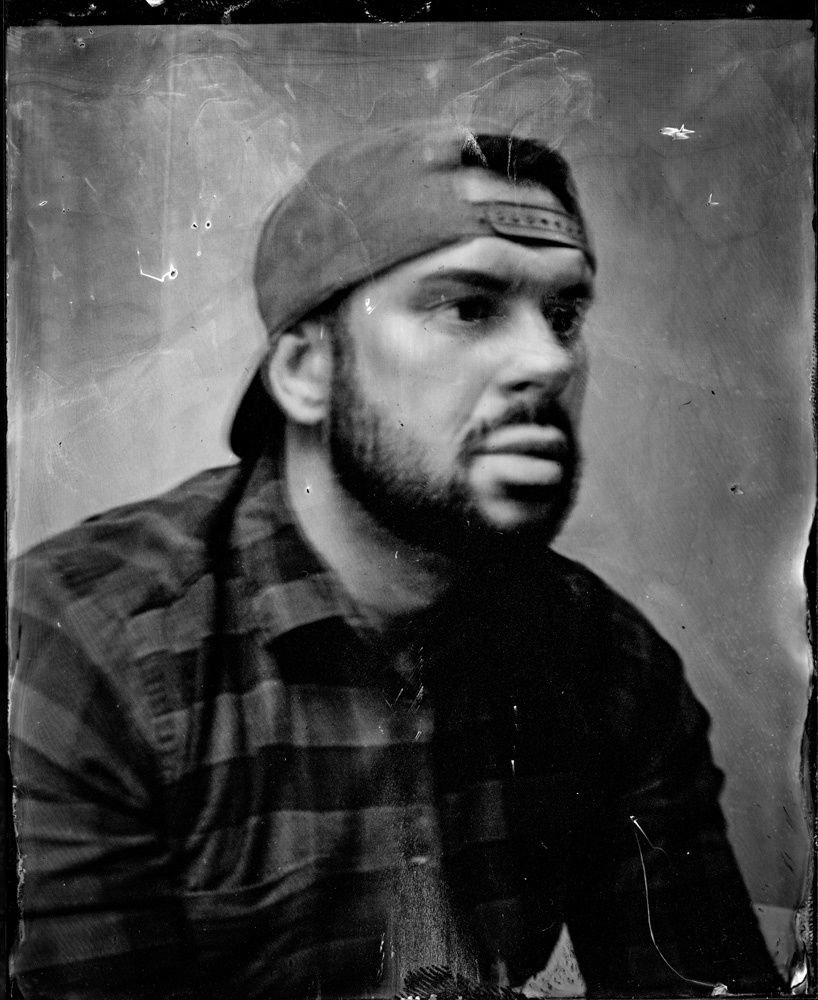 Most recently I shot a portrait of Will Everett, an amazing friend and true brother.  This plate represents a gamechanger for ‘MentalCollodion’, as the image was shot via a Zoom call and has enabled the project to become accessible throughout the globe in a time of lockdown and isolation.  This was a sixty-second-long-exposure.

I’d like to thank you from the bottom of my heart for reading.  Peace!

Further details concerning the logistics of ‘MentalCollodion’ can be found on the publicly accessible GoFundMe page: https://www.gofundme.com/f/mental-collodion