Your web browser is out of date. Update your browser for more security, speed and the best experience on this site.
Find out more
We use cookies and similar technologies to optimise your experience when using this site, to help us understand site usage, and to tailor our advertising on third party sites. Read about Cookies and view our Privacy Policy at the bottom of each page on our website at any time.
A JavaScript execution error has occurred somewhere on this page. The page may not function as intended. Try refreshing before continuing.
Published 16 April 2021 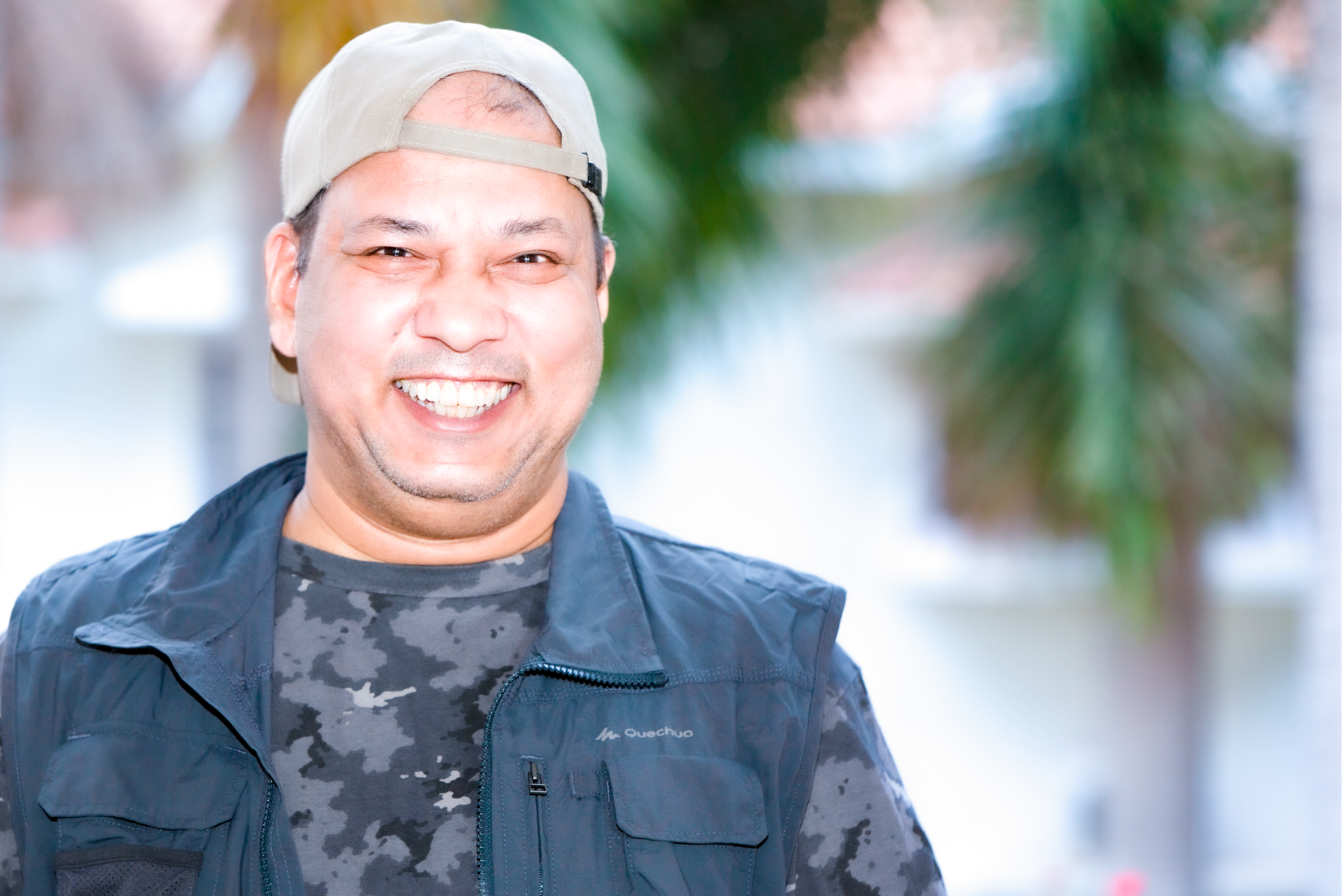 This is the thirty third blog in a series on COVID-19 and lockdown, edited by contemporaryweb@rps.org and Avijit.Datta@rps.org

I first touched a Rolleiflex in the early 1970s as a child in Kolkata; I used a plastic Agfa-Gevaert Optima once in college, bought a Kodak at some time, a Minolta around 1990s and a point and shoot Sony WS80 in 2000. It was not until 2010 that I first owned a DSLR and started shooting earnestly. Until 2013 I had been the usual ‘happy-snapper’ on holidays; my perspective to photography changed when I started a Diploma in Creative Photography mentored by Magnum Photographer Raghu Rai.  He had documented the Bhopal Gas tragedy for over 30 years and has also produced an iconic photobook of Kolkata streets.

1 (above) Few people wore a mask in March 2020 in Varanasi, a city popular for pilgrimage among others.

Living in a country with a population density of 382 per square kilometre, social distancing was initially a welcome stricture during the pandemic. I had often freaked out at airport check-in queues where people would jostle. However, it seemed the Gods planned to be wrathful. In March 2020, I freaked out because a friend insisted that I rode a crowded tuktuk in the holy city of Varanasi; since then my favourite hobby of driving across India and shooting photographs was about to take a long hiatus because of the pandemic.

By the 17th of March 2020, the perils of pandemic started dawning and people were slowly getting habituated to wearing face masks; social distancing still needed enforcement. The last two days had been stressful with strange news of countries talking of closing land and air borders. Across the globe, lockdowns denied citizens normal living conditions; many lost their livelihood and others, their lives. 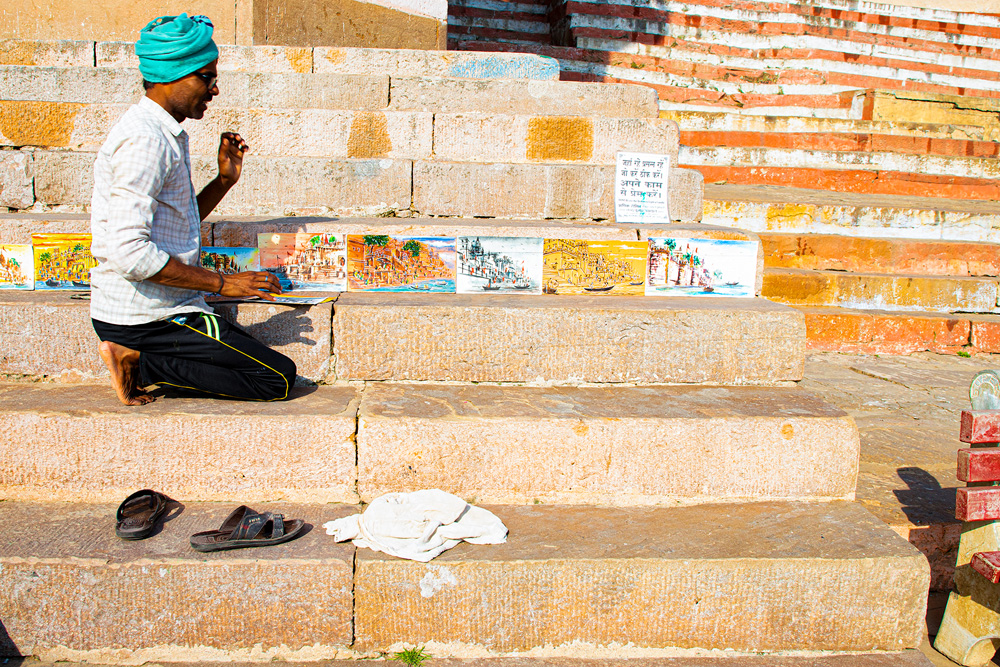 2 The last photograph I shot before the lockdown was announced

On a morning stroll along the Ganges, this was the last photograph that I shot in Varanasi, India, before returning home. By June 2020, this painter would lose his livelihood and be living on government doles.

The 910 miles flight back home was unexceptional, except that cabin crew wore masks and the two of us occupied the first row of six seats of economy class.

Soon enough images of empty shelves filled social media and antiseptic hand gel sold out. Earlier, in February I had ordered excess isopropyl alcohol in anticipation of this emergency. 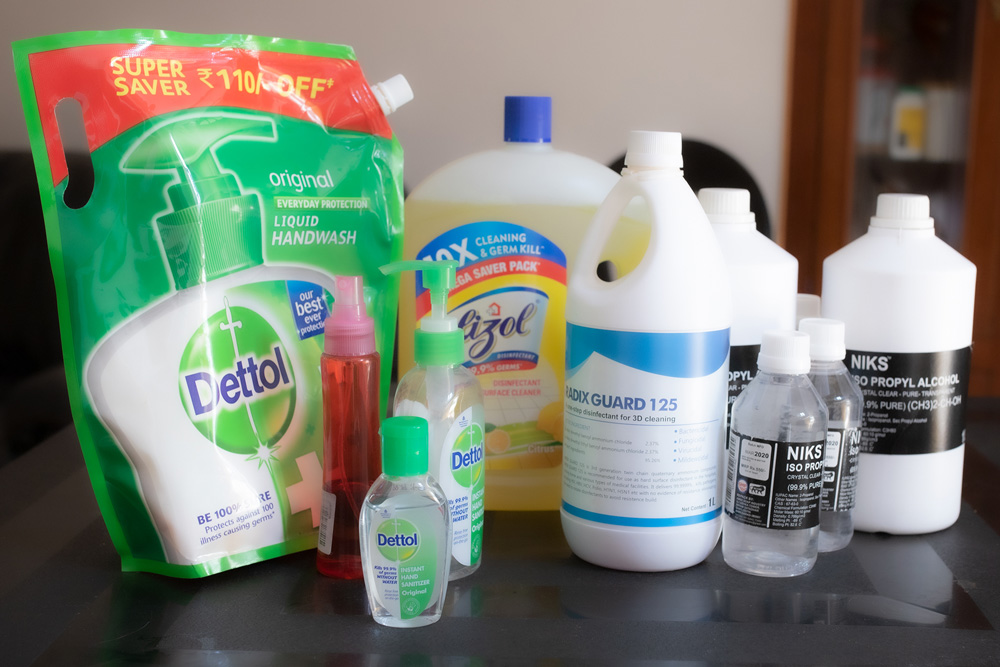 A friend of mine advised bank withdrawals and storage of cash at home and stocking up sacks of staple food just as the government insisted on “digital cash”.  People banged metal plates to support key workers, lit candles and blew the conch – some even chanted, “Go, Corona, go” – but this pandemic was to stay. People were divided by their beliefs and actions now. There were those, who were at ground zero. Infected, scared and dying; medical professionals worked assiduously to save lives and preserve health. Then there were those who ridiculed rationale and science, instead believing snollygosters and thereby put others at harm.

Back home, the gloom after two deaths in the family in 2019 still loomed large. The lockdown came with a farrago of myth, fake news, tweets and general news in media – and did little to alleviate stress. We had created, lived and rode the wave of globalisation a couple of decades before. The pseudo-protectionism wave seemed global now. My daily maid and garbage collector were asked to go on leave with pay. Along with adapting to the new normal, we adopted Axl, the Spaniel. Man’s best friend was now family. 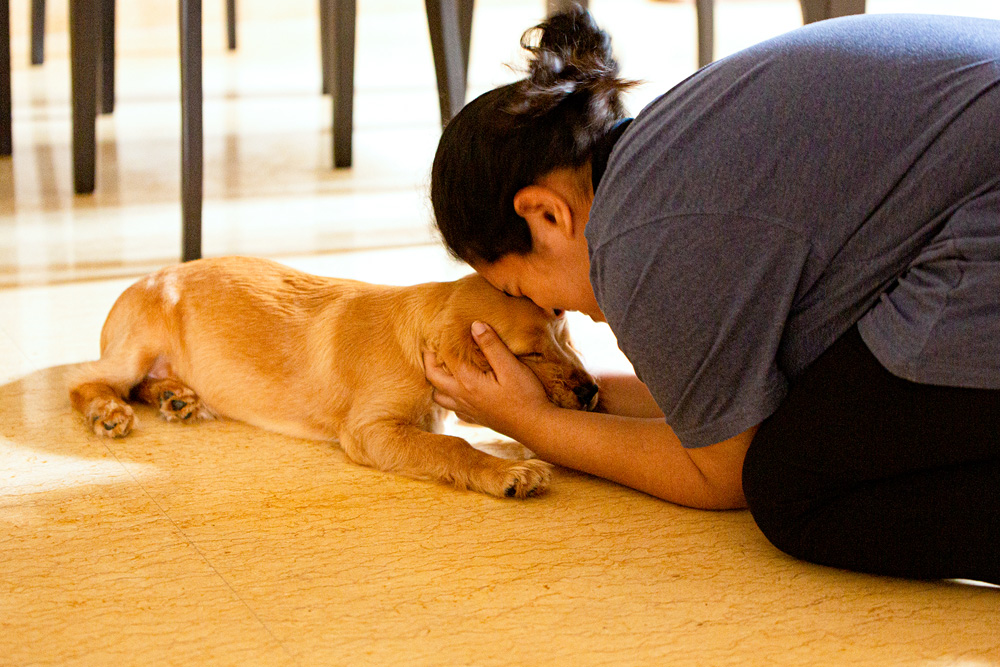 4 With Axl the Spaniel we were smiling again

We were normal people in a world that increasingly was being referred to as the “new normal”.

Daily needs, groceries, medicines and Amazon parcels were all delivered to our doorstep and left in the porch, with an awkward promise of “zero human interaction”, unlike in the past, when they would hand over items. 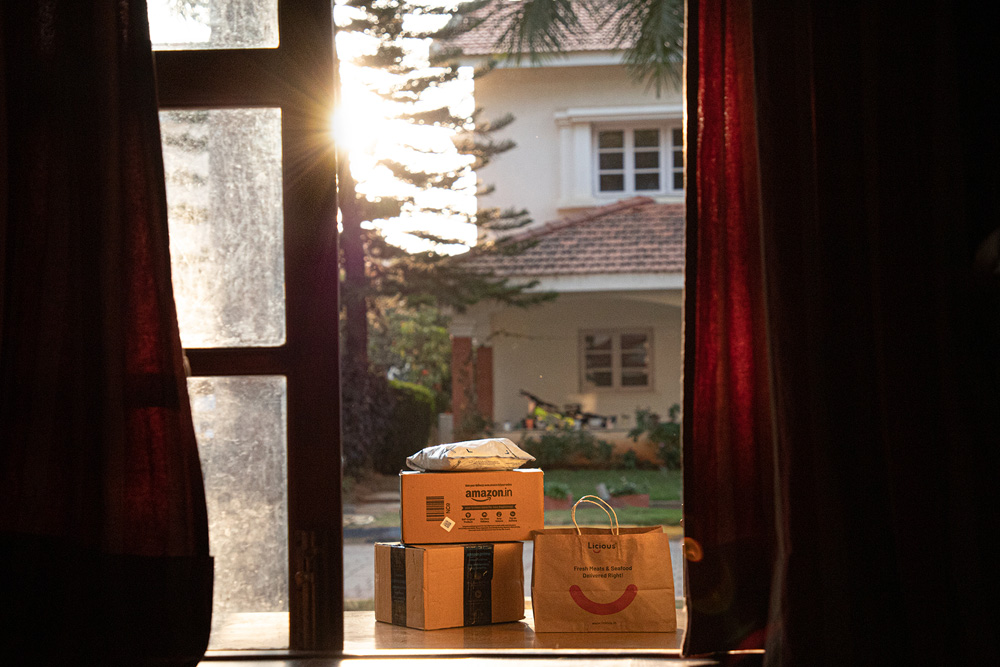 5 Groceries and fish left at our porch

In October 2020, Colonies in the neighbourhood continued reporting people being infected, difficulty in getting admitted to hospitals, and occasional deaths.  The pandemic made me feel old and feeble. In the past, I would rush to support neighbours in emergencies. This time, I was asked to stay away even when someone in the community was infected. “Stay home, stay safe” was the new mantra. Those with comorbidities could not step out. Could not help others. That hurt!

The weekend rigmarole now included fumigation inside the house and spraying disinfectants around the house as we often breached the lines between paranoia, prudence and vigilance. 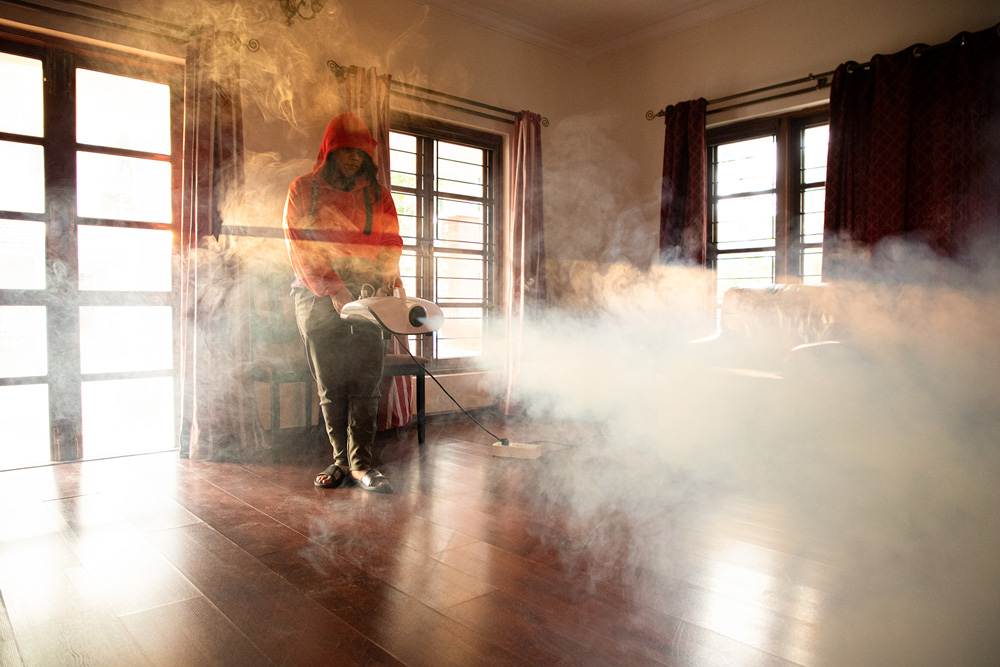 6 Fumigating in the new normal

On a new normal morning I would walk; it was eight months since the last time we had driven for more than five miles.

The restlessness was showing in us. I finally drove out to see what the new normal looked like around me, this time mostly in southern India. My baggage stuffed with new world essentials: extra masks, disinfectant sprays, hand sanitizers and an extra litre of isopropyl alcohol.

Outside, people did not take the instructions seriously. They wore masks differently and distancing norms were followed erratically. 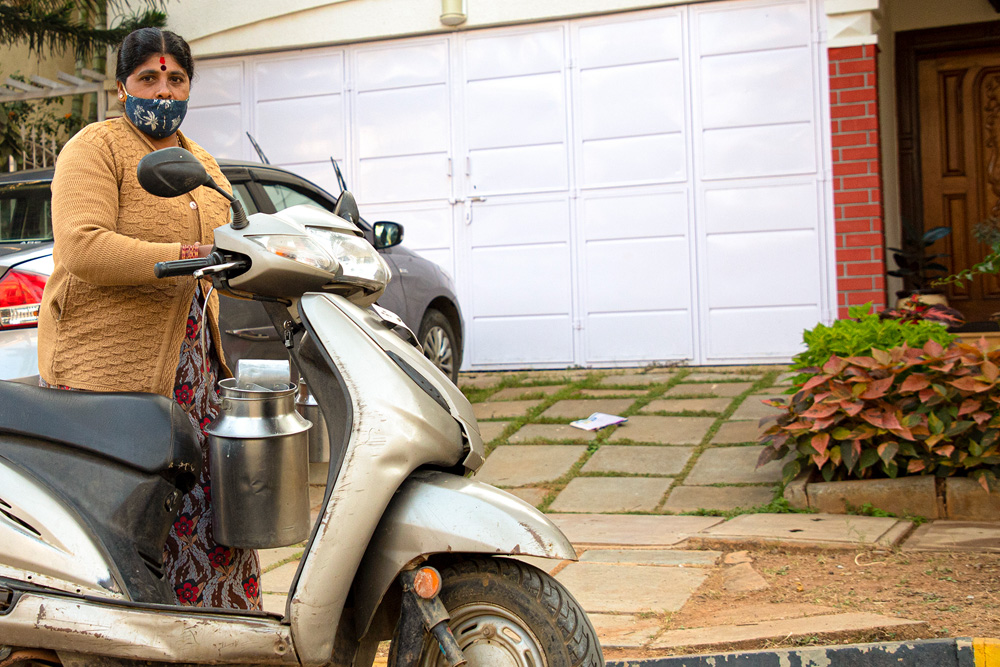 7 One of the “new normal” ways of wearing a mask

Farther south on Vivekananda Rock, the southernmost tip of India on the Indian Ocean, not a single soul was visible (Pre pandemic annual footfall would be 300,000). 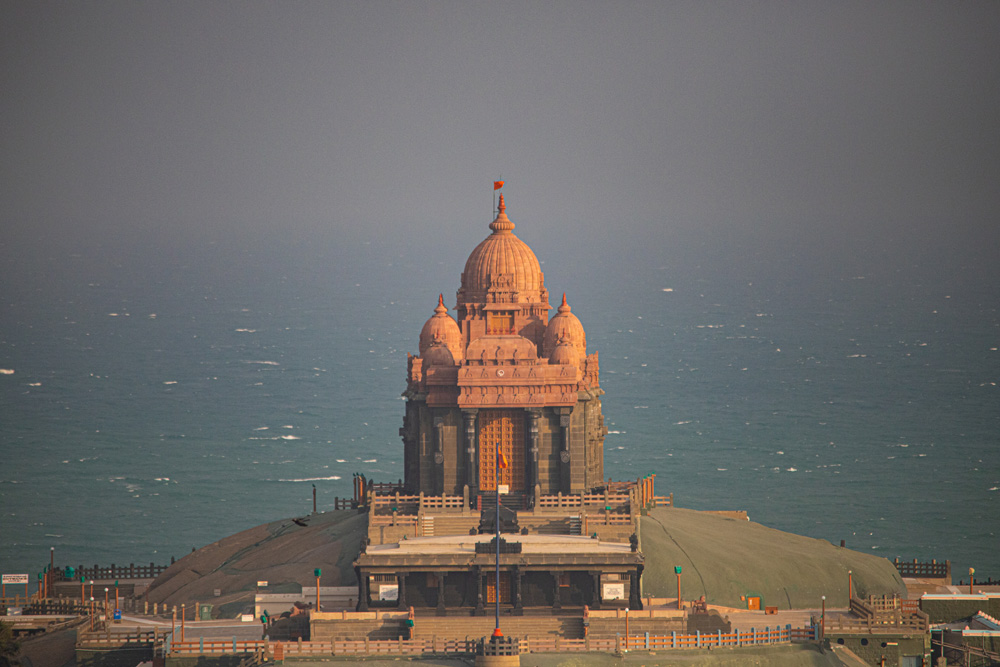 8 On Vivekanand Rock, the southernmost tip of India - Not a soul was visible!

People were stressed. We drove to Kerala in south of India, where the government supplied food and essentials to families and local agencies ensured that people do not venture out. The Kerala health minister had attracted new nicknames by May 2020 – “Coronavirus Slayer” and “Rockstar Health Minister”.

Mohan, our driver, was out of a Covid ward a fortnight before and appeared fighting fit. Awkwardly, I turned and congratulated him. 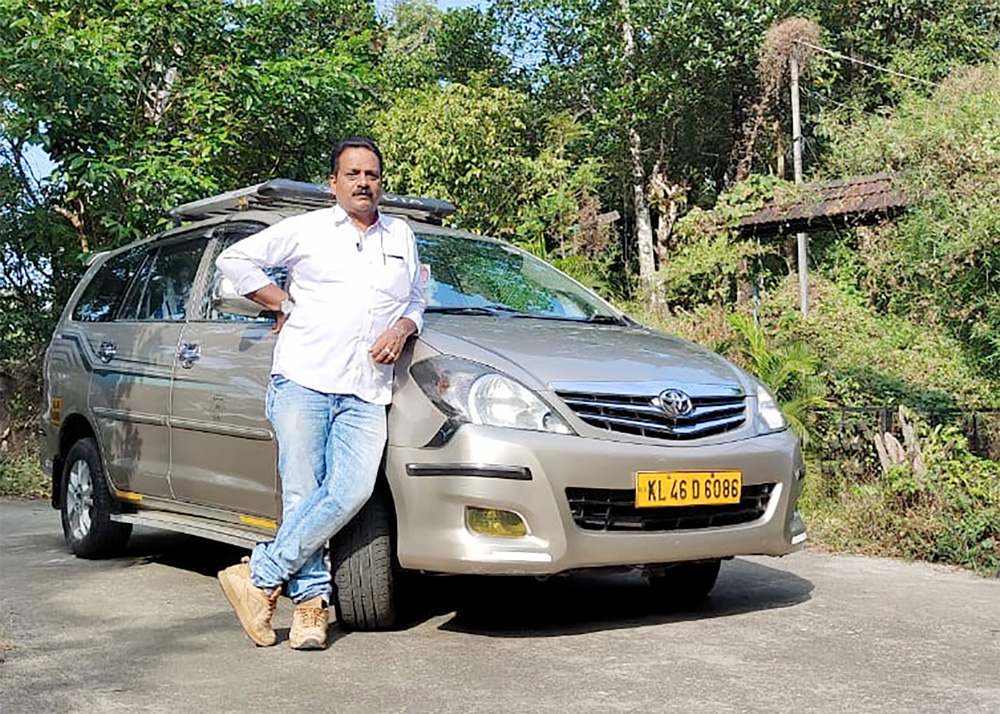 Even before the first case of COVID-19 occurred in Kerala, the state was already well-prepared, employing WHO protocols. At the resort where we stayed, professionals like Chef Rakesh had a job, unlike most of his kin, although visitors to his restaurant were reduced. 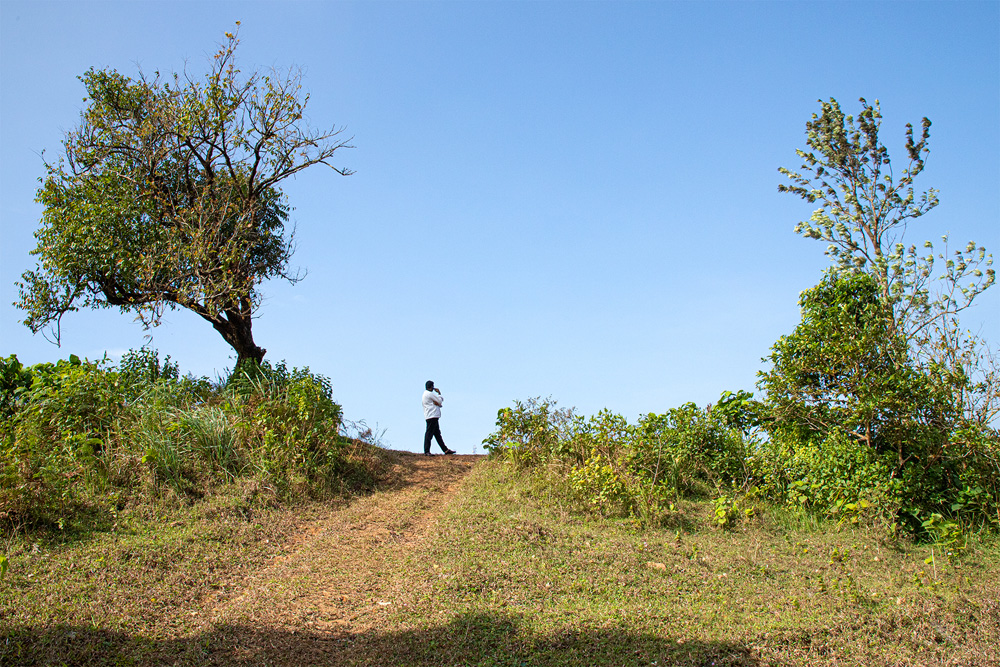 We walked into a coffee plantation along dense rain forests, to meet the workers. Little children outside the plantation frolicked around. A young worker at the coffee plantation was nonchalant but was afraid of police. He put a cloth over his mouth before I clicked the shutter a second time. 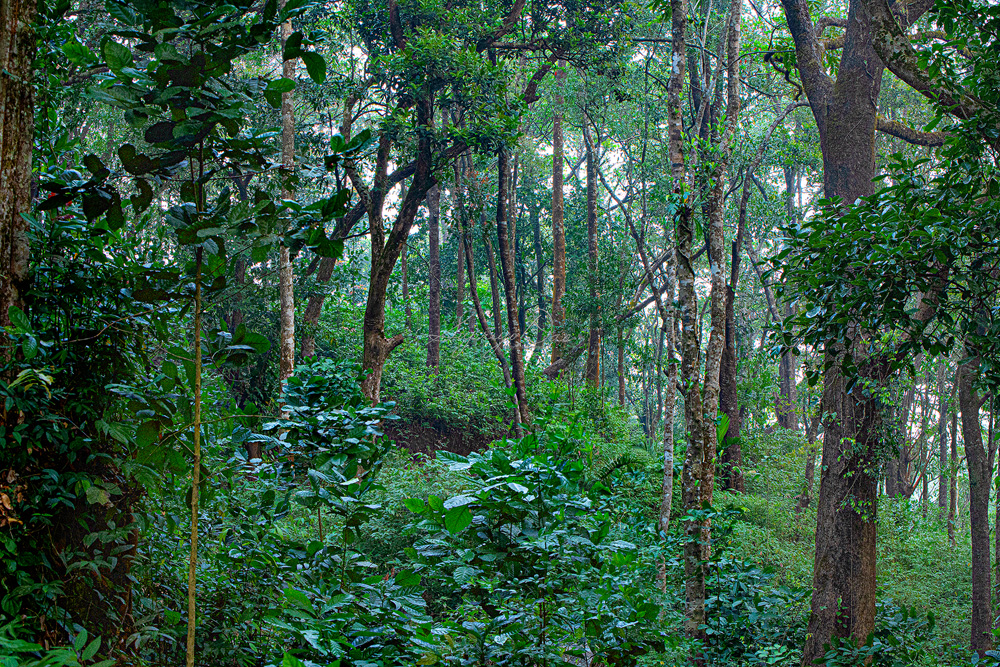 11 On our way to the coffee plantation, I wondered whether the virus could reach here inside a dense rain forest 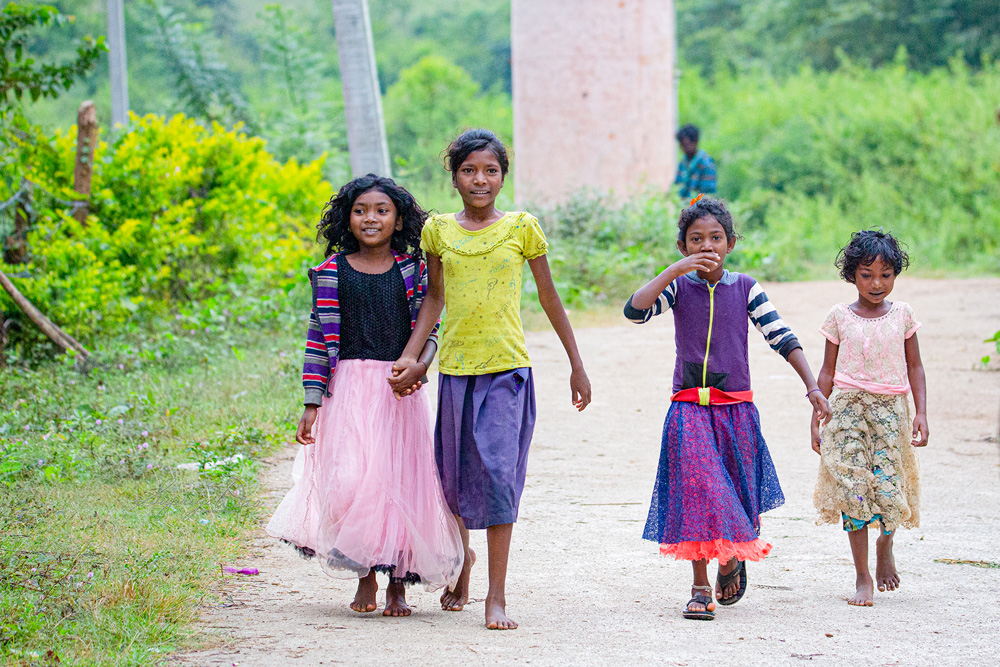 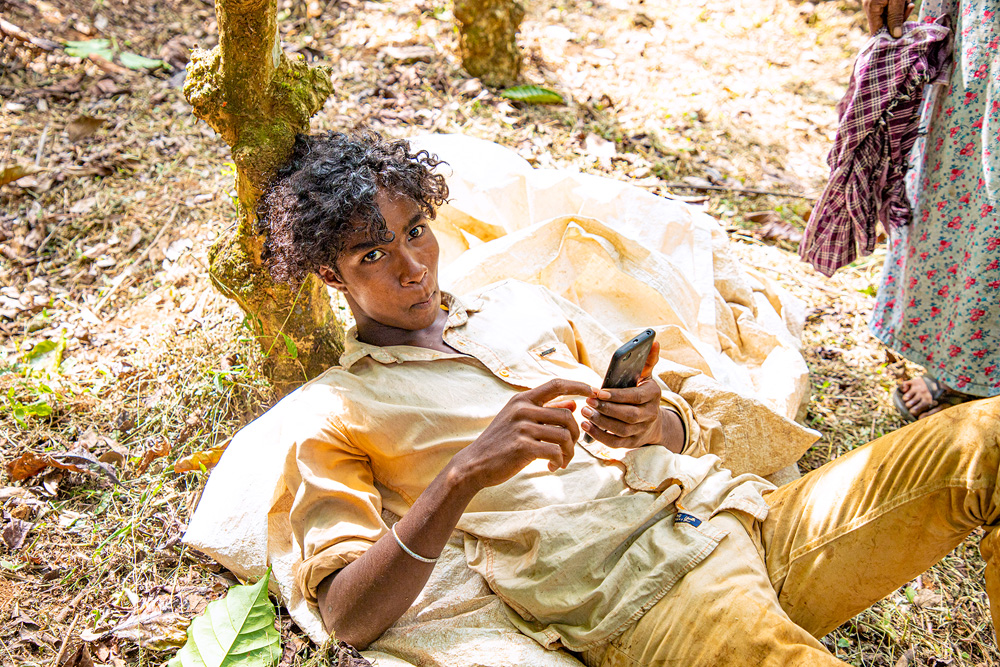 His octogenarian grandmother had survived the Asian Pandemic of Influenza that hit the country in 1957. She narrated how many of her adolescent cousins succumbed to that virus. We asked her about COVID-19. “We are still alive, our children are alive, all you happy people have come here to see us…”.  She paused to catch a breath and slowly said, “my granddaughter has a (mobile) phone…she will call a doctor if anything happens.” Her response was profound. She was far away from the daily tweets announcing counts and vaccines, deep inside a rainforest. And yet, her confidence in the ongoing fight was moving. 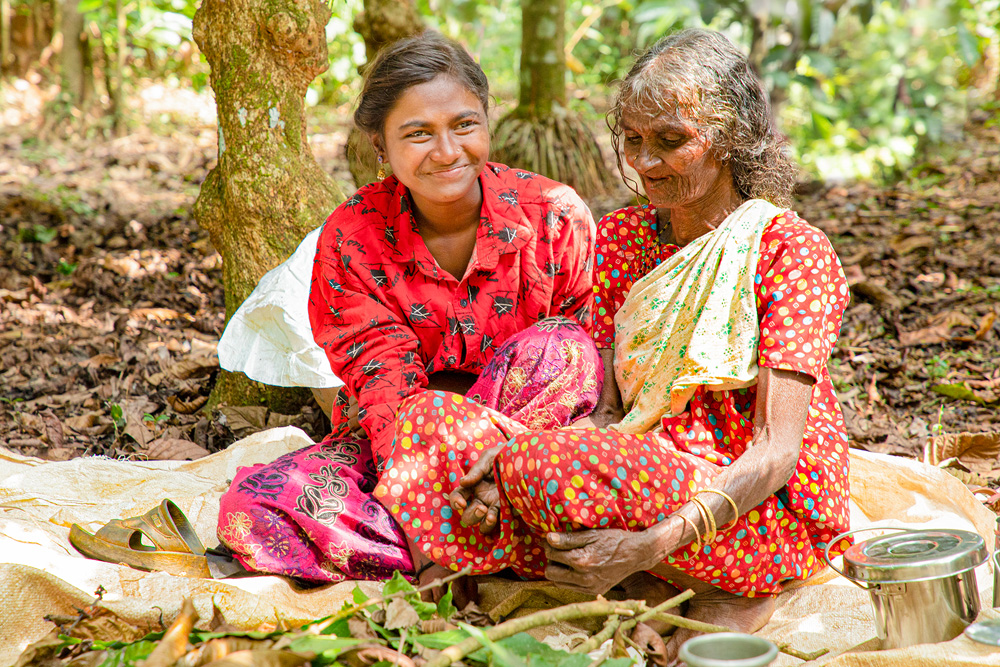 14 The 1957 Asian Flu survivor narrating her experience. Her granddaughter is cautious of the infection.

As I write this blog, a lot has changed since the last time we had travelled, significantly, India is the second worst affected country after the USA; curfews from 8pm are in major cities like Mumbai.  More people are vaccinated in India than the number of cases – so far 100 million have been vaccinated in 85 days with the target of 300 million by August. India is the world’s largest vaccine manufacturer and exporter (to date to 100 countries via COVAX/ GAVI) producing the Astra Zeneca vaccine (Covishield) by the Serum Institute of India, and Bharat Biotech’s Covaxin. Vaccines are cheap (Rs150 - £2, or free). 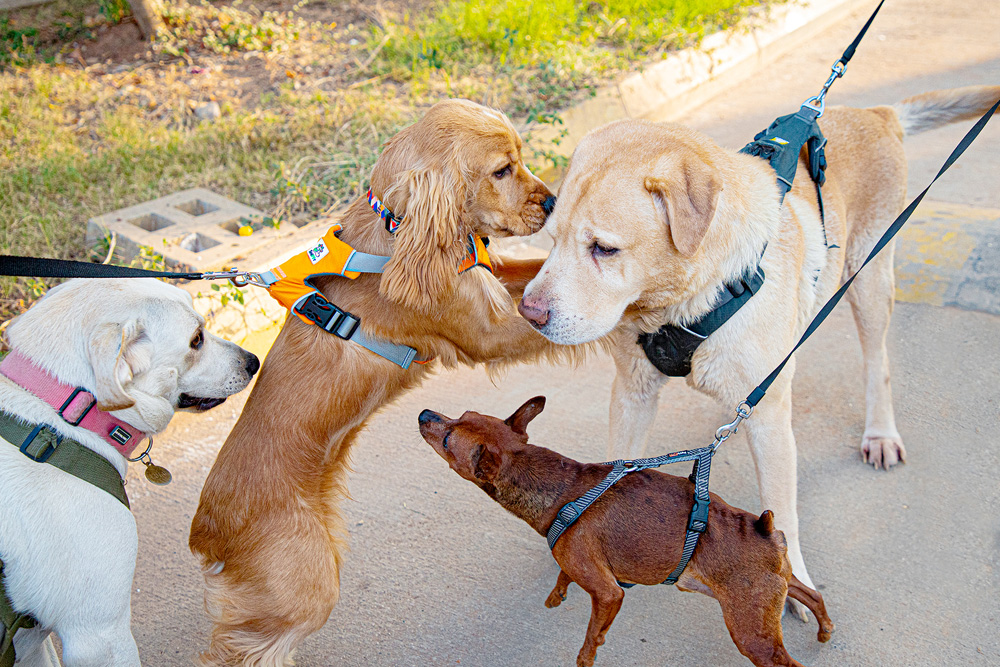 In another world, a paramedic friend of ours lost few of his paramedic colleagues to the virus, doctors were being subjected to an unspeakable amount of pressure and families, particularly the poor, were bereaved and quarantined  by the virus and by mental stress. In contrast, in affluent segments of society distances are maintained, pollution is minimal, and canines are socializing. 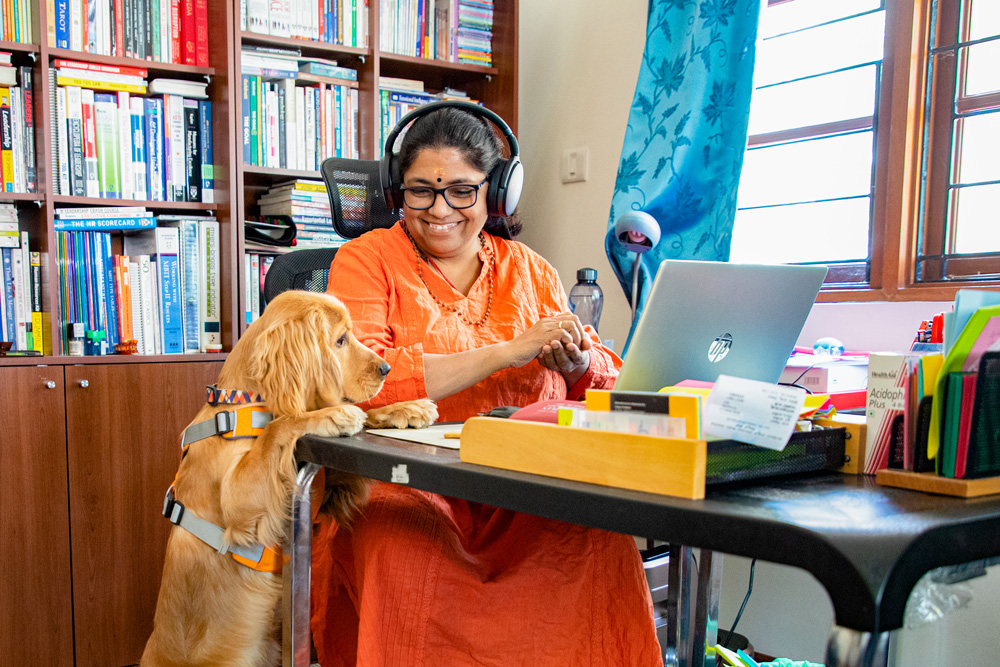 I have been working from home in IT since 2008.  A message came from my wife’s workplace that their “Work-from-home” policy was being extended to September 2021. Now, we have set up two more “home-offices”, one for my wife and another for my daughter. Productivity has increased. We appear to be distant from the deadly virus and political bickering.  At least for now.