Your web browser is out of date. Update your browser for more security, speed and the best experience on this site.
Find out more
We use cookies and similar technologies to optimise your experience when using this site, to help us understand site usage, and to tailor our advertising on third party sites. Read about Cookies and view our Privacy Policy at the bottom of each page on our website at any time.
A JavaScript execution error has occurred somewhere on this page. The page may not function as intended. Try refreshing before continuing.
Published 27 June 2021
Martin Bond and Lottie Limb

This is the thirty eighth blog in a series on COVID-19 and lockdown, edited by contemporaryweb@rps.org and Avijit.Datta@rps.org

Then Covid-19 hit and Bond realised now was not the time to stop photographing and posting an image a day - much to the relief of his 30,000 Facebook followers. “This is a unique time in everyone’s lives; it would be silly for me not to carry on and document how the pandemic was affecting my home town.”

A decade ago, “I just happened to be trying out a lens from Jessops on Green Street and wandered down Trinity Street and saw a guy painting the first floor of a shop.

“So I thought he’ll do for a test of this lens I was kindly lent for an hour. And just as I took it he dropped some paint on the floor, on his sandwiches and the pavement below, and I thought ‘oh I’ve just caught a moment!’ and I suddenly got the bug.”

Here are 12 photos from A Cambridge Diary - one for each month of 2020 - that tell the story of that momentous year. 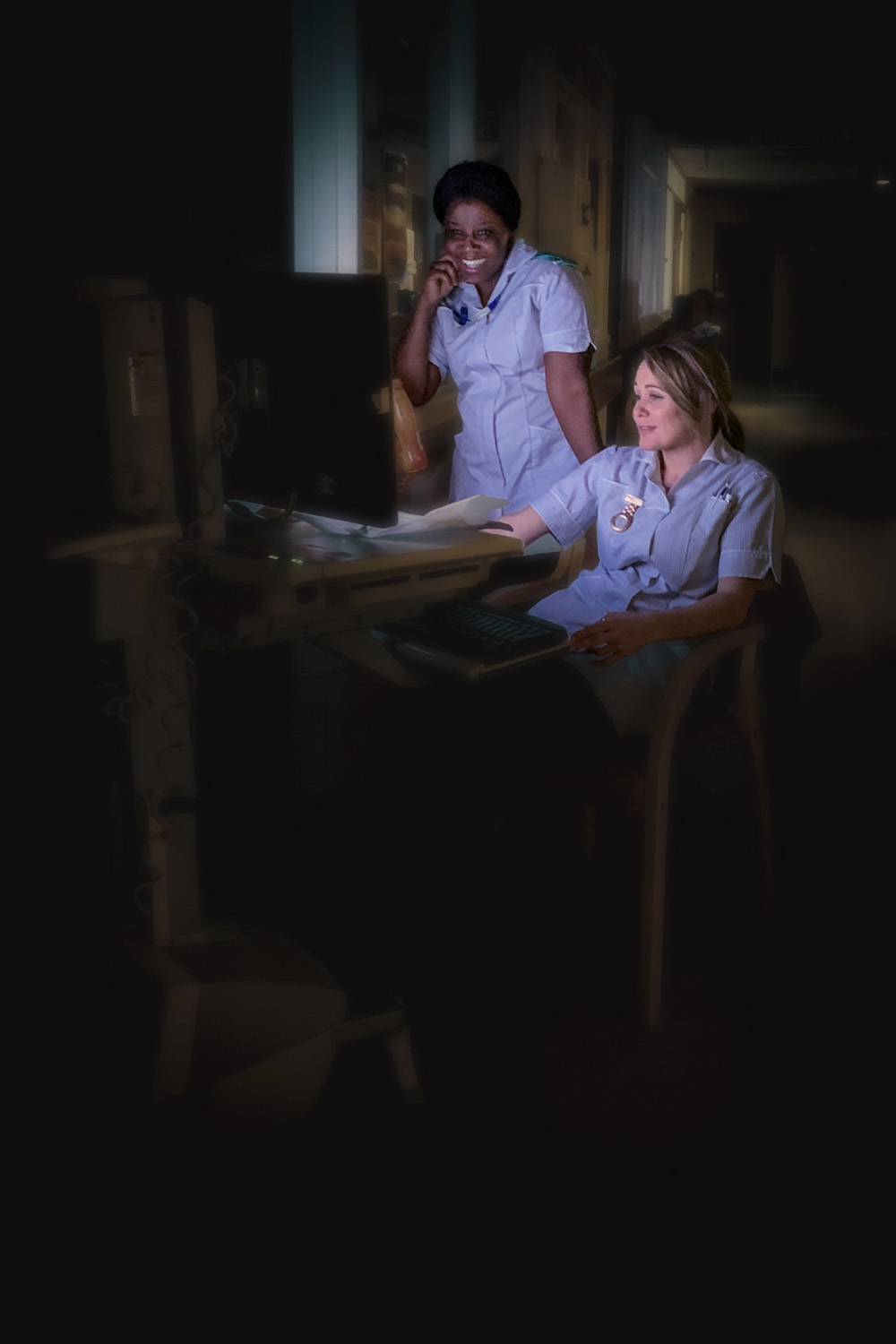 The year began with a close personal loss. Bond’s mother died in January and this image is of nurses on the night shift at Addenbrooke’s Hospital, Cambridge where she received palliative care.

Bond said: “I took the picture on my iPhone from her bedside. The ward was closed due to an outbreak of MRSA but my mother was allowed to stay due to her prognosis.

“This image provided me with such comfort when I wasn’t able to be with her as I knew she was being cared for by the best people in an amazing hospital.  She died a few days later but I will always be grateful to these angels.” 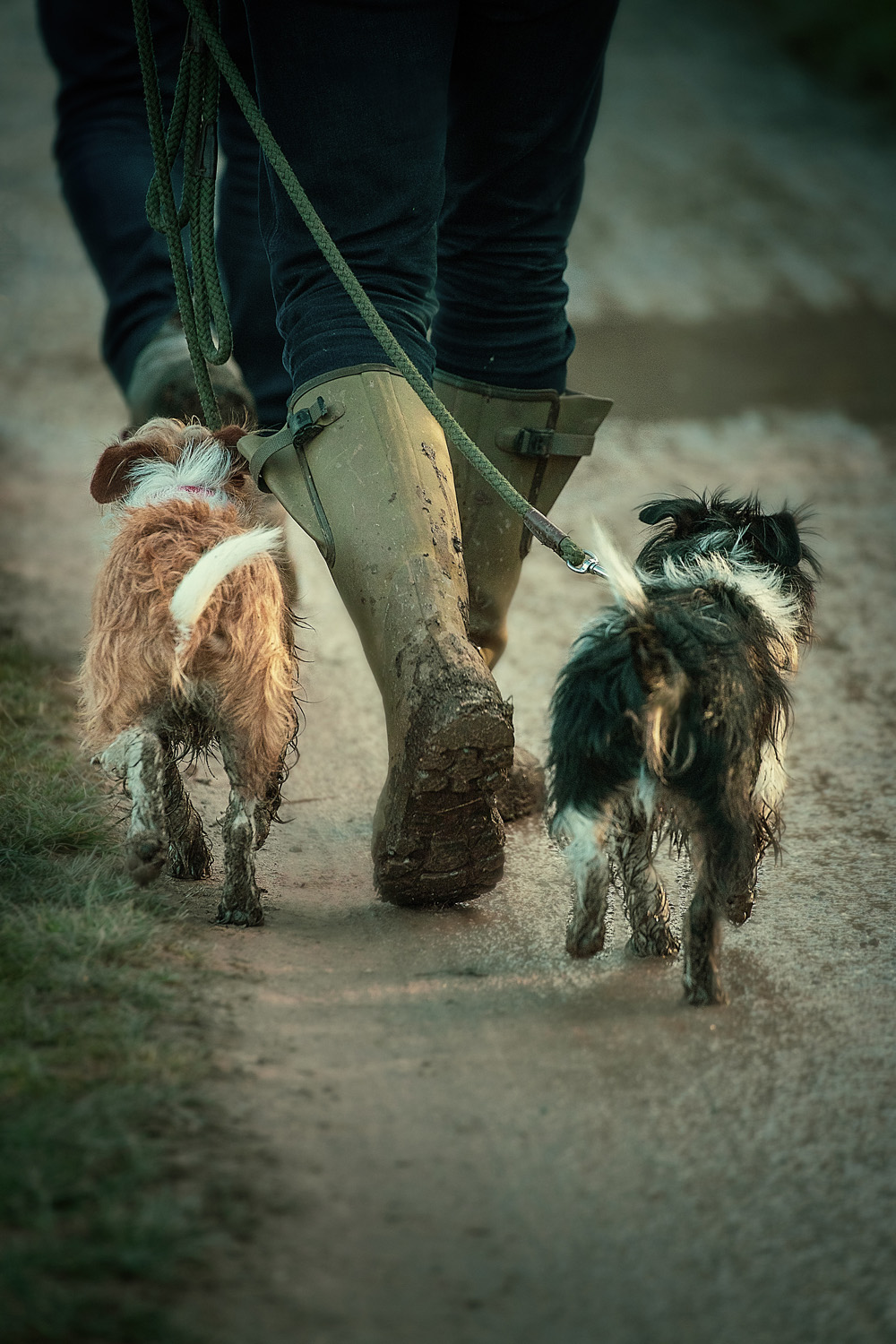 In February, Bond set out to photograph the Lent Bumps, the last University Rowing event before lockdown, but instead posted a photo of two dogs along the towpath to Fen Ditton.

Choosing this “little moment of humanity and caninity” - he’s a big dog lover - is typical of Bond’s approach. “Very often if there's anything going on I will turn my camera in completely the opposite direction.” 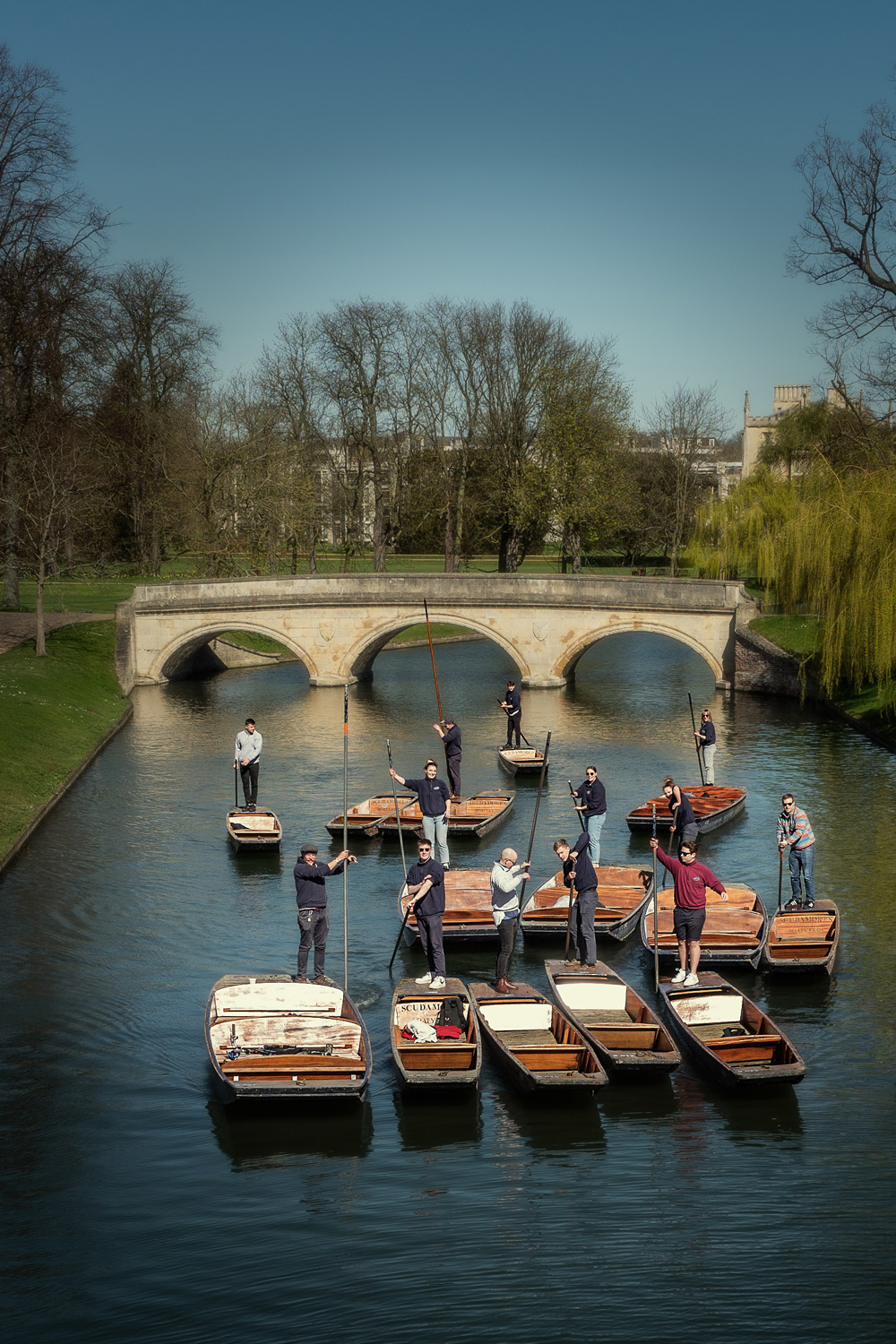 “By March I think we’d all realised that something was happening that wasn’t going to go away anytime soon,” Bond said. A week before the national lockdown was announced, Scudamore’s punting company had already made the decision to remove all 120 of their boats from the river. Bond received a call that about a dozen boats at a time would be ferried along the river and waited for this shot on Garret Hostel Bridge. Incidentally, it’s his favourite spot in Cambridge. 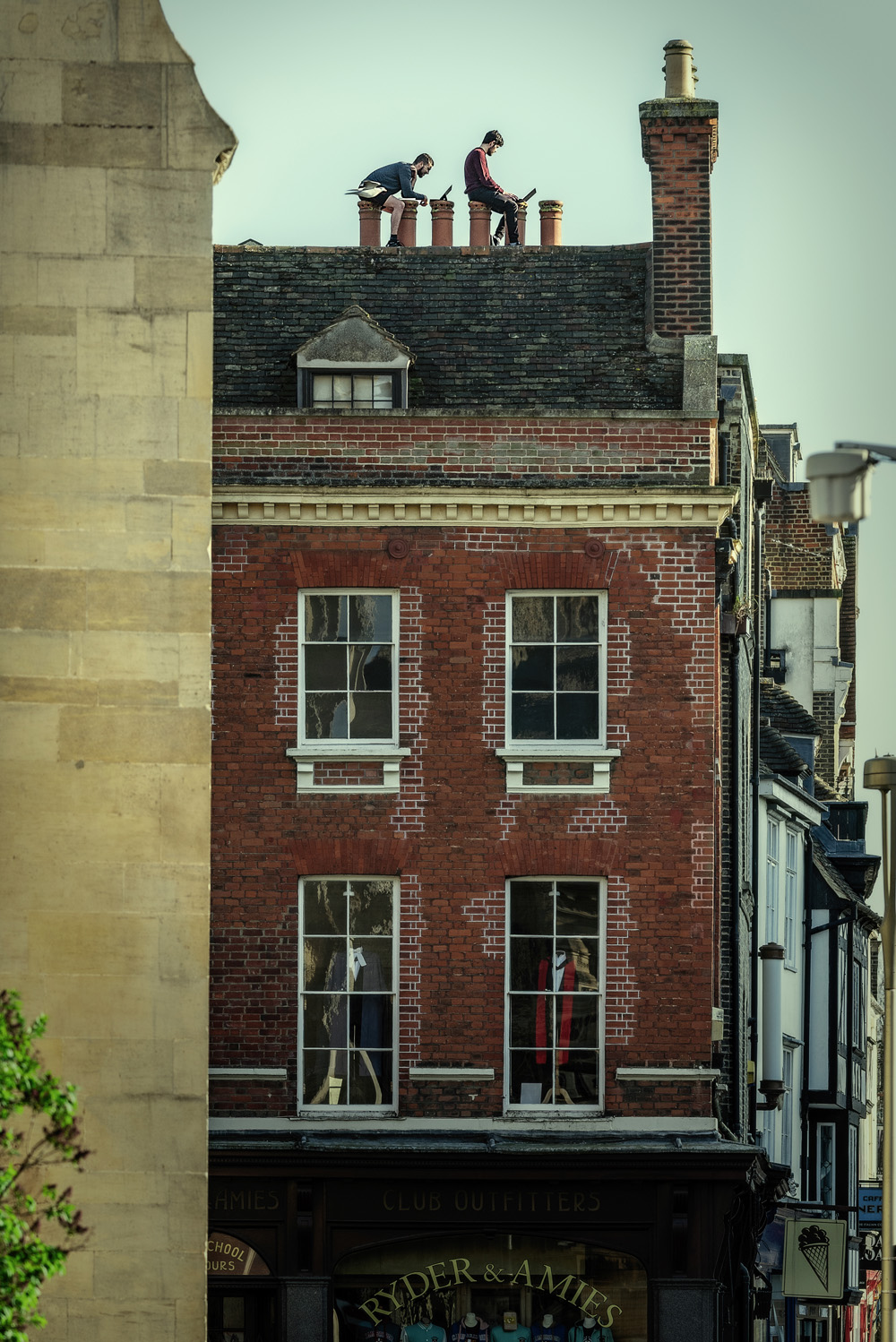 “During April, Cambridge continued to observe the rules on social distancing and the city remained quiet,” Bond recalled.

“There was an air of wonder and those fortunate enough to explore it did so in their own way.”

“April was too early in the pandemic for colleges and the University to decide exactly how they were going to organise social distancing but these two King’s students made their own arrangements, although I’m not sure the chimney pot desks were two metres apart.” 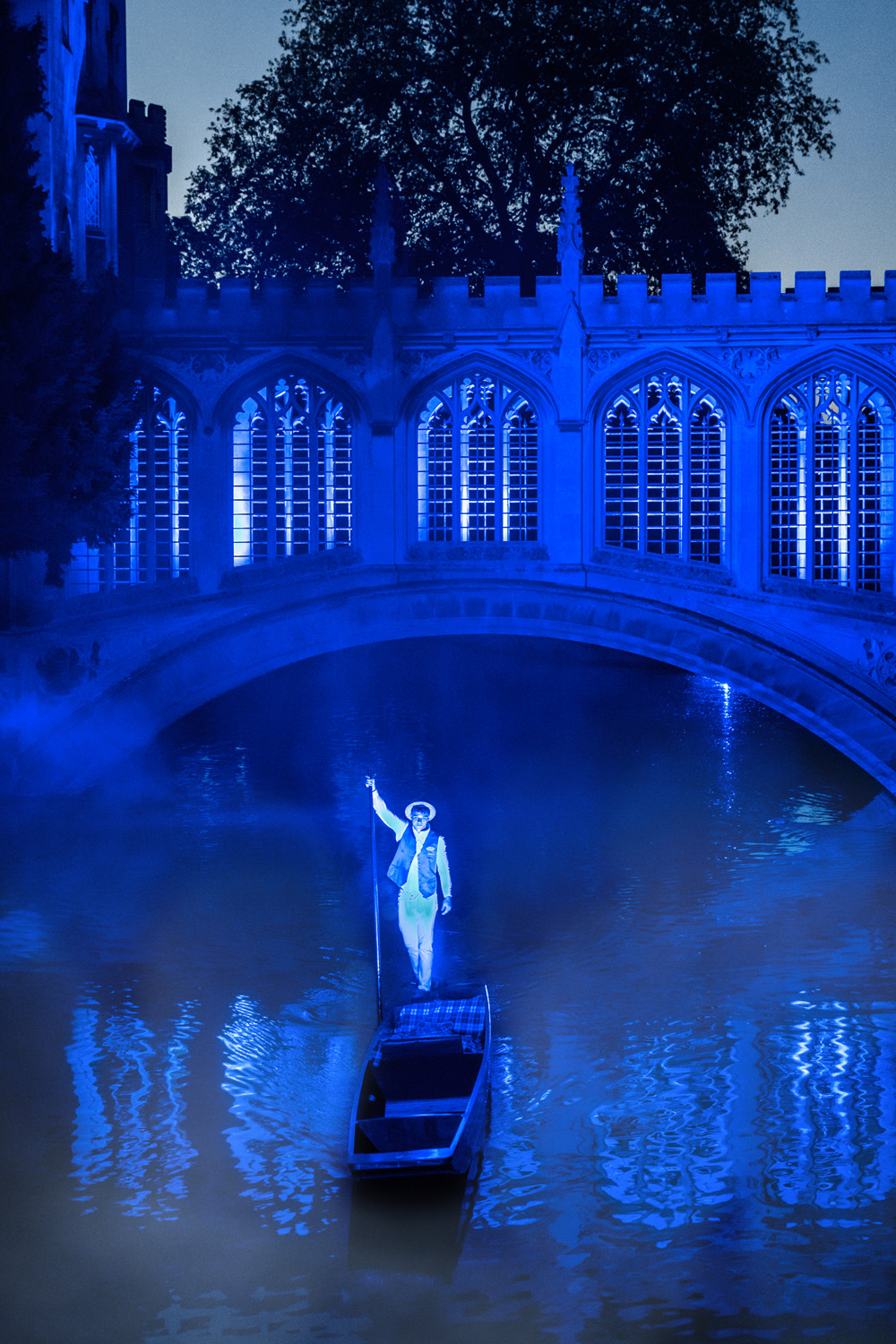 In May, another call-up came from a group of lighting and production experts who used their temporarily redundant skills to support the Light It Blue campaign for the NHS.

“However, because of lockdown and the venues mostly being behind closed gates, they needed a photographer to record and publicise their work,” said Bond.

“Enter A Cambridge Diary. This is the Bridge of Sighs at St John’s College with a hastily arranged lone punter.” 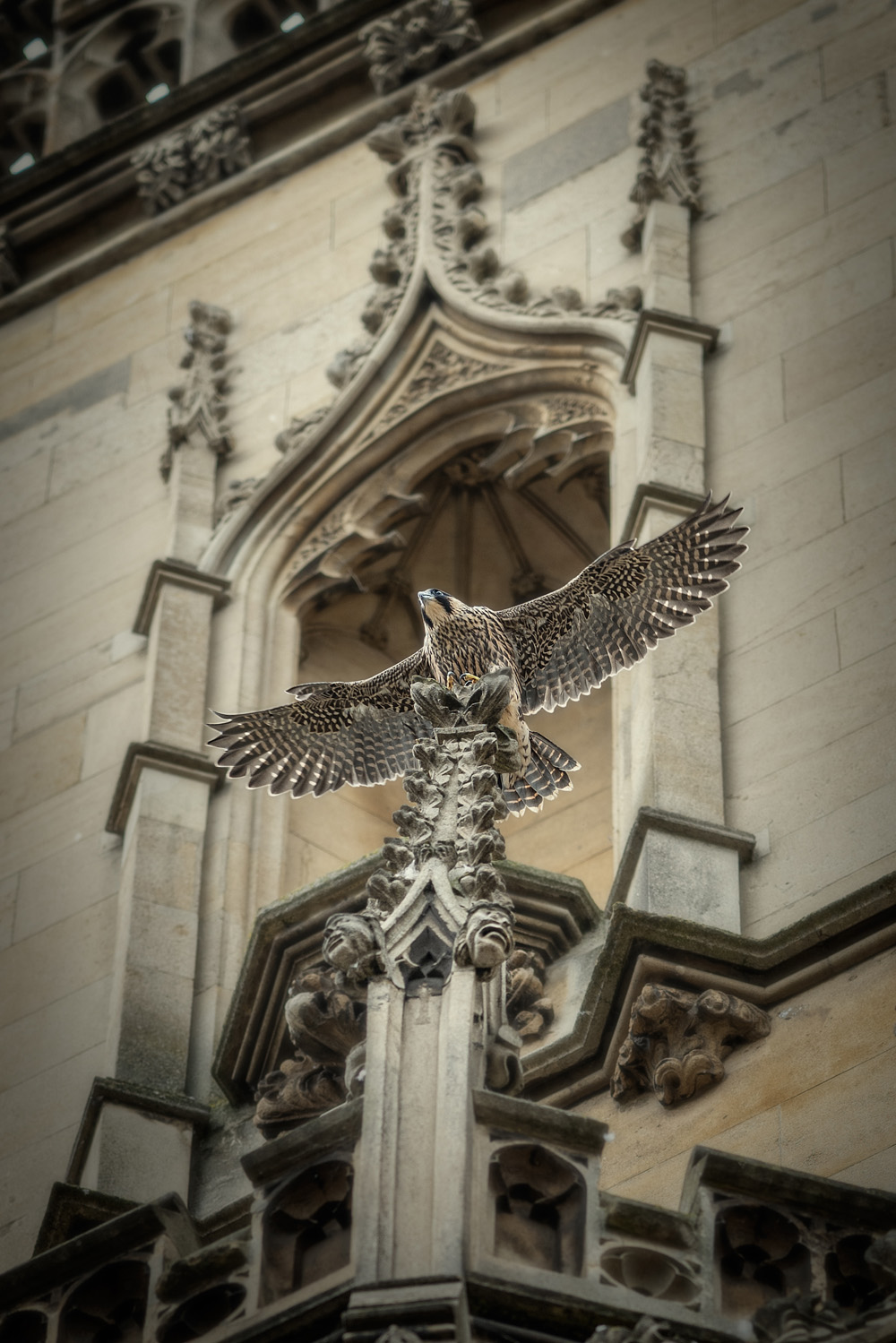 As the city quietened down, Bond had the opportunity to photograph birdlife like never before.

This magnificent shot of a Peregrine Falcon from June shows one of a mating pair, raising three chicks in a nest high up in a tower in the centre of Cambridge.

Bond writes, “Over the summer I watched as each chick fell to the road trying to fly, survived due to there being no traffic and was returned to the roof by helpers from the Raptor Foundation to try another day. Links below

“These pictures would never have been possible were it not for lockdown.  The lack of traffic and ambient noise gave these wonderful birds more freedom and also allowed me to locate their every move as I could hear their calls.”

Still, it took patience and skill to capture the fastest bird in the world in this pose. 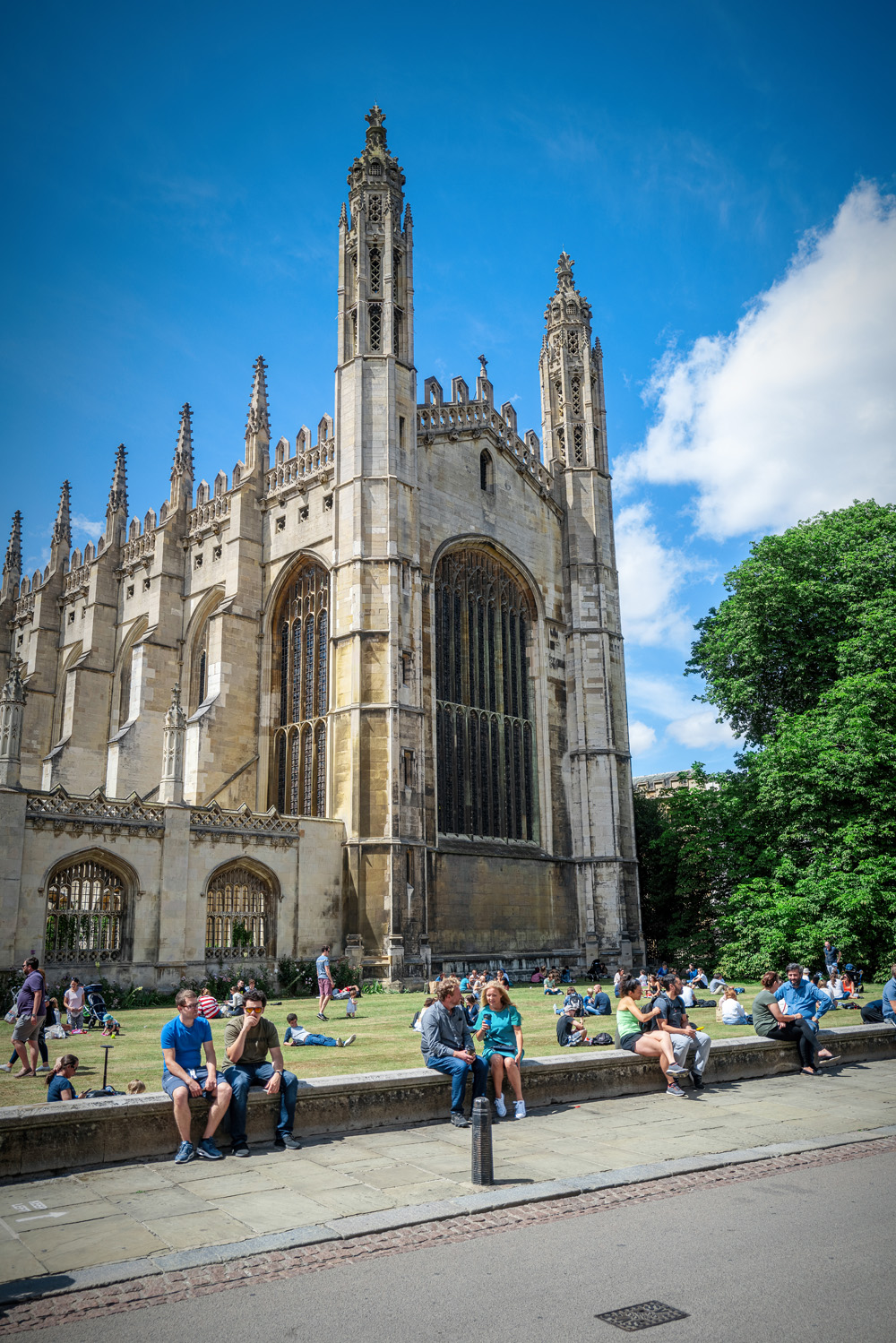 When restrictions eased in July and people began returning to the city centre, King’s College took the unusual step of allowing people to picnic on its front lawn.

“For hundreds of years,” writes Bond, “this was completely out of bounds to the public and a strenuously guarded space by the college porters.”

Bond, however, was able to dance around the town-gown divide in his youth. He played in a local band with two ‘townies’ and two students, meaning they had access to rehearsal rooms in the colleges. 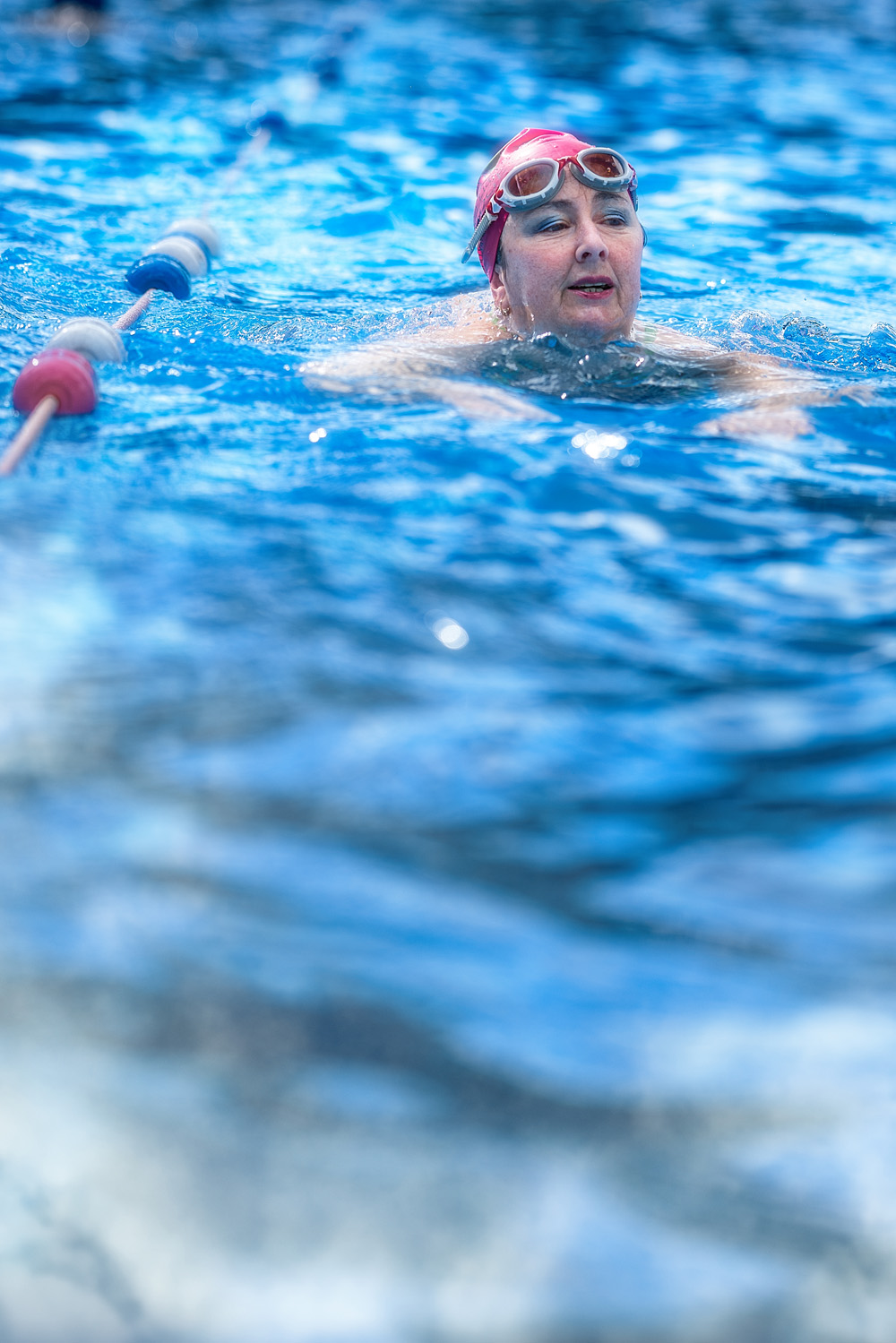 In August, Bond and other regular swimmers were delighted that Jesus Green Lido opened for a short summer season.

Splashing around in Europe’s longest outdoor unheated swimming pool was a welcome relief - captured in this immersive photo.

“I know from personal experience [that the move] saved many minds from meltdown and bodies from seizure,” he wrote. 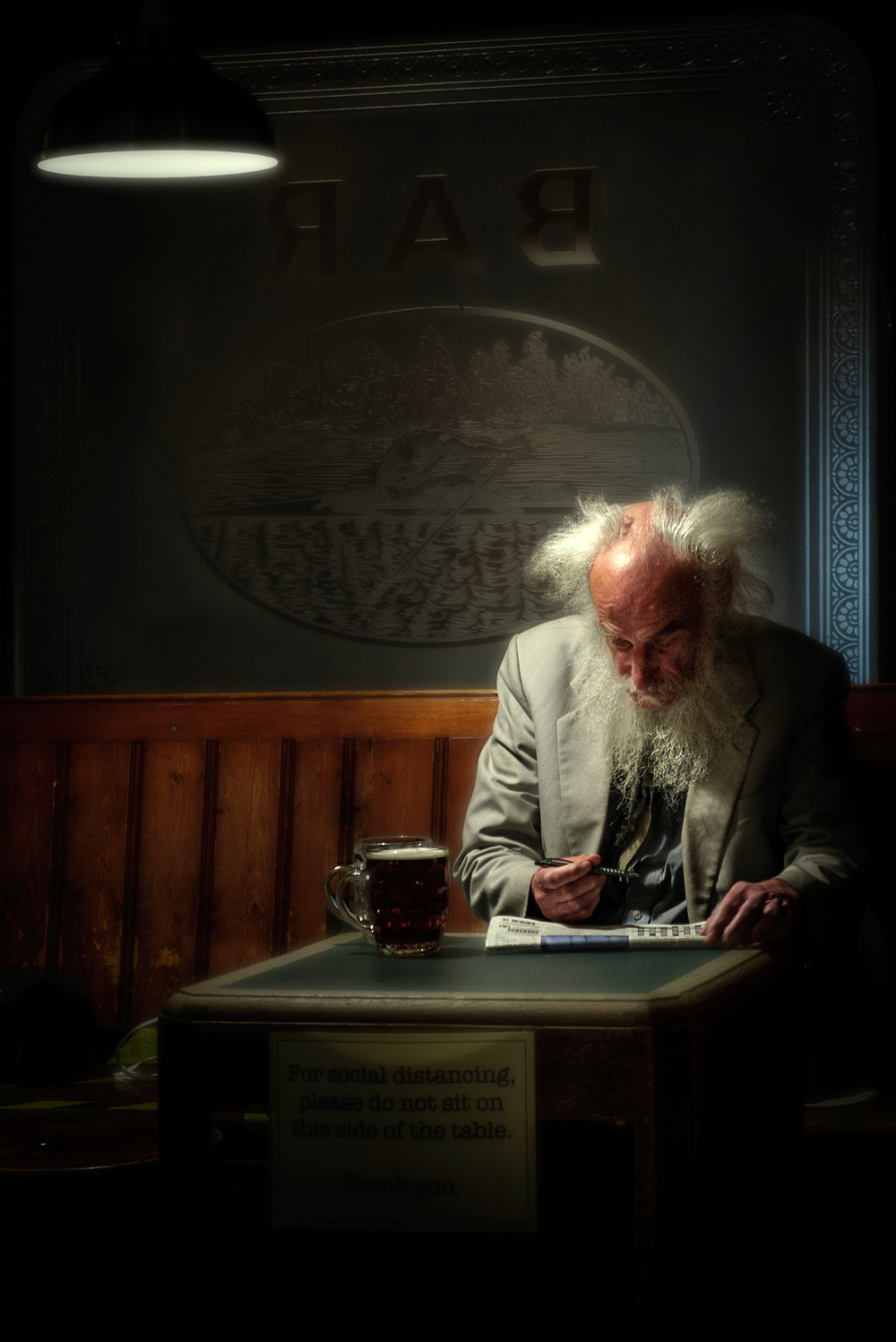 September came, and the historic pubs of Cambridge were allowed to open again.

Bond spotted some “familiar faces returning to their favourite places in the bar.  Many of them are university lecturers, fellows and professors with more going on in their heads than a Google server,” he added. 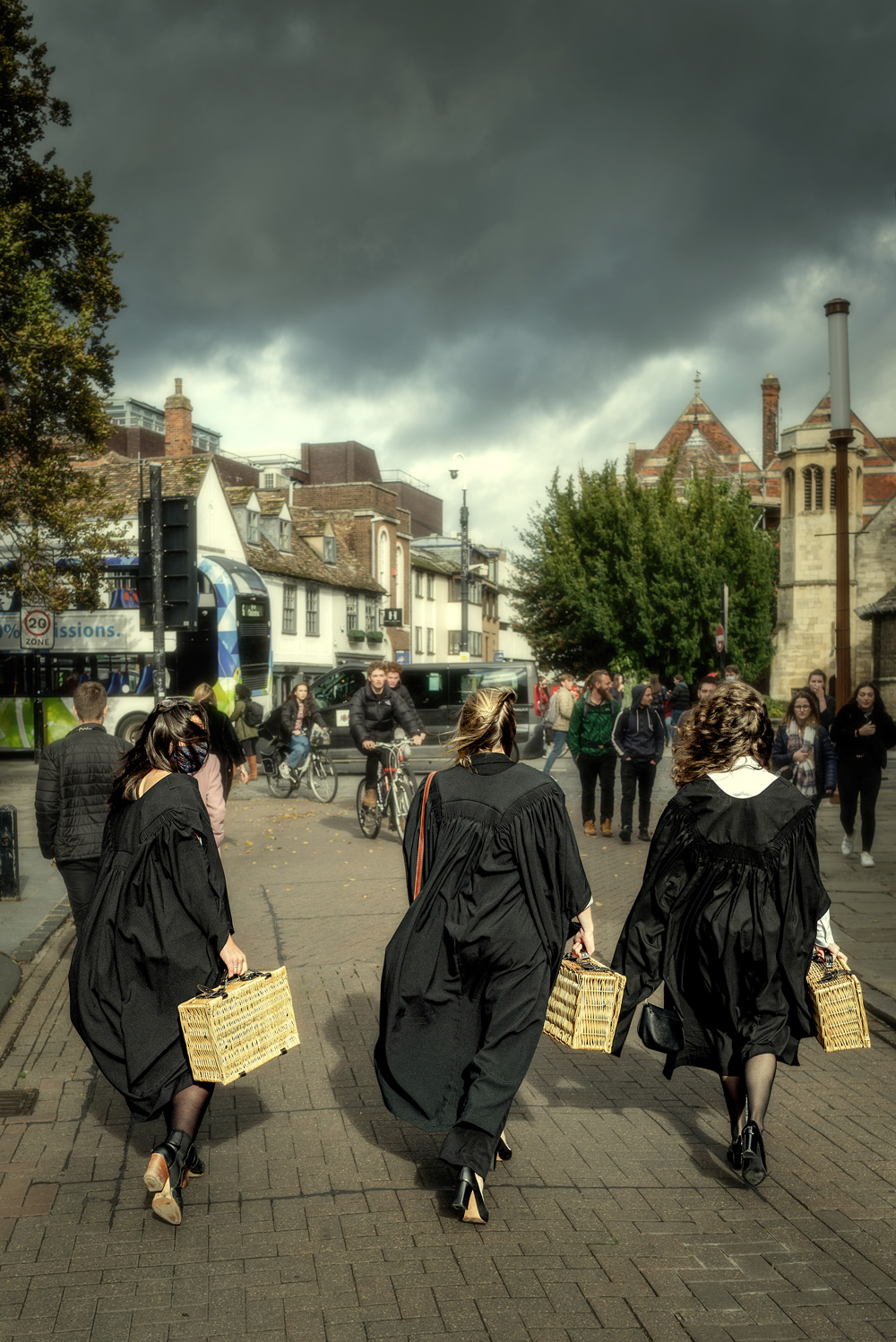 With the return of students in October, the University had to adapt.

Bond said: “Freshers in particular were denied the rituals of the new term due to social distancing measures introduced by the colleges over summer.

“Instead of the usual matriculation receptions and dinners these freshers were off to Jesus Green for lunch courtesy of the college hampers provided instead.” 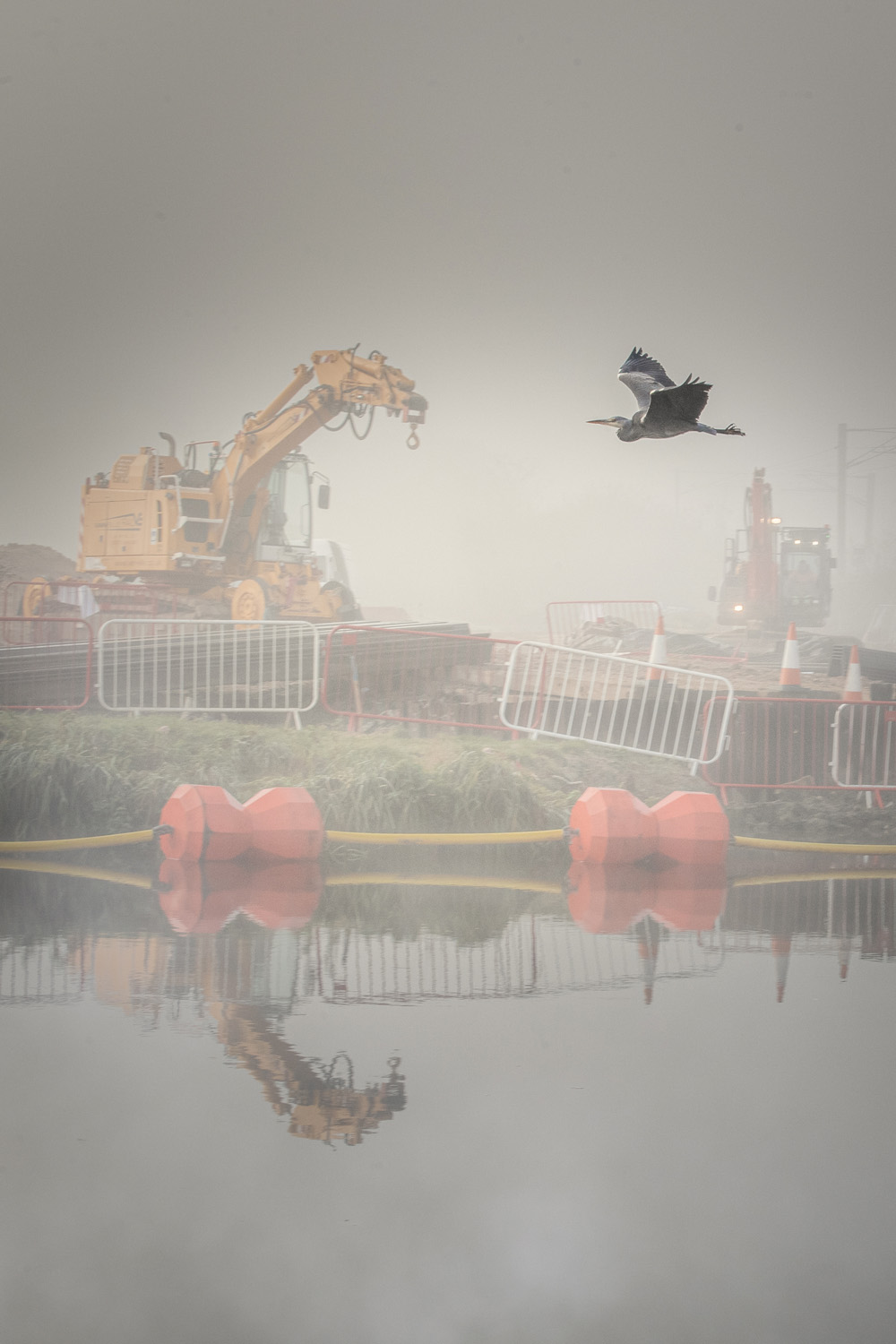 Another striking avian moment came in November; encouraged by the lack of noise and activity, a heron moved into the city from the Fens.  Bond captured him in the morning mist by the river Cam. 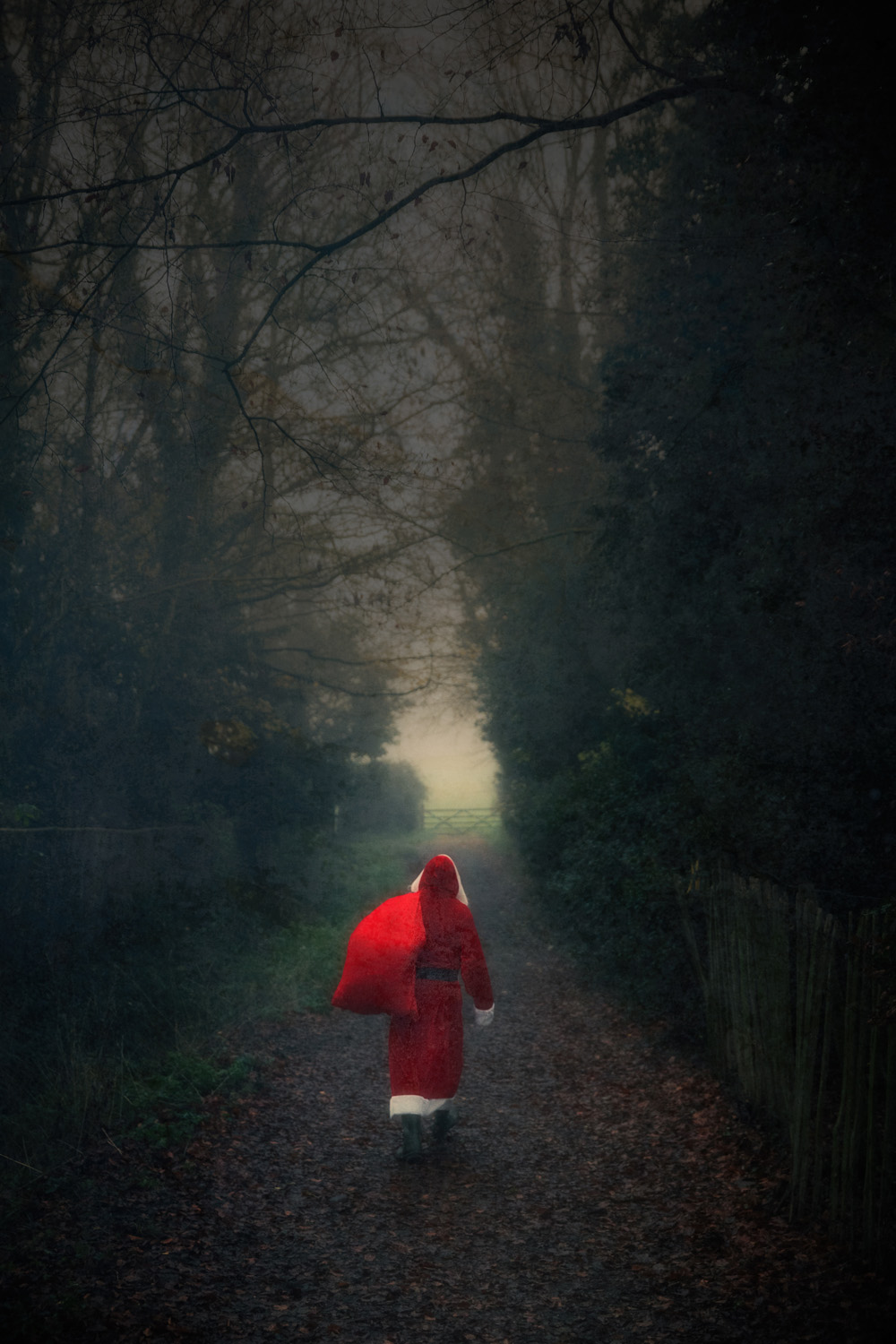 He explains: “Every year Grantchester have a children’s Christmas Party in the village hall but this year they had to make it mobile and visited children around the village at their homes where the kids built their own grottos.

“Here is Santa taking a short cut by the Team Gardens.”

Martin Bond is a professional photographer who has lived in Cambridge all his life. A Cambridge Diary, which sees him post a photograph from Cambridge online each day; this is his labour of love. Martin has been documenting Cambridge for 10 years and planned to stop on the exact day of that anniversary, March 10th, 2020. Unfortunately, the Pandemic struck, hence these images.

Lottie Limb has just completed her MPhil in Modern European History at Gonville and Caius College, University of Cambridge.

Links to articles on Raptors in Cambridge:

Blind, but I can See