Your web browser is out of date. Update your browser for more security, speed and the best experience on this site.
Find out more
We use cookies and similar technologies to optimise your experience when using this site, to help us understand site usage, and to tailor our advertising on third party sites. Read about Cookies and view our Privacy Policy at the bottom of each page on our website at any time.
A JavaScript execution error has occurred somewhere on this page. The page may not function as intended. Try refreshing before continuing.
Published 11 July 2021 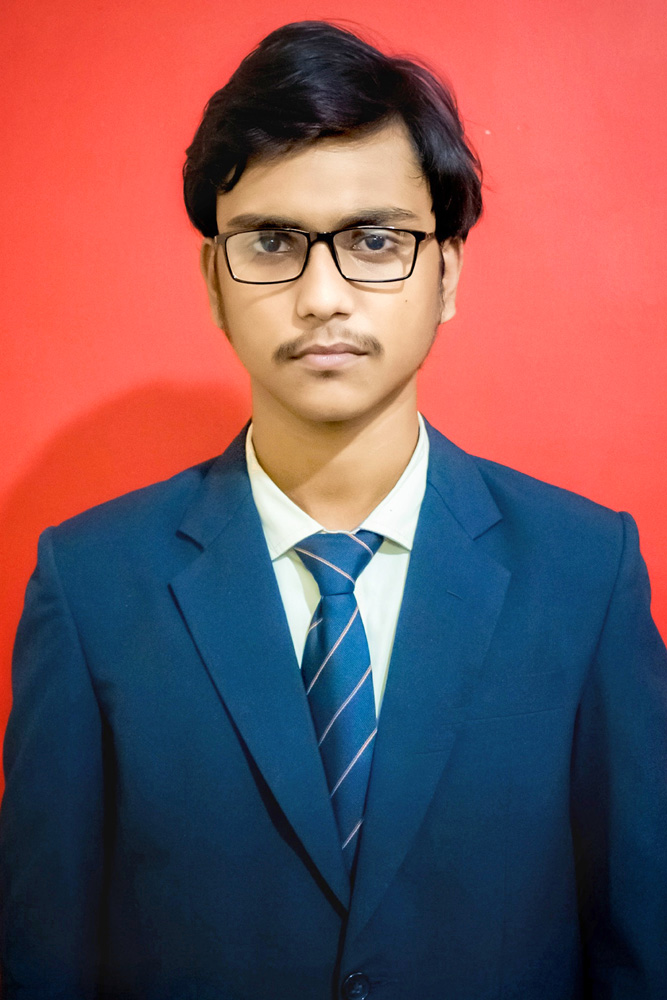 This is the thirty ninth blog in a series on COVID-19 and lockdown, edited by contemporaryweb@rps.org and Avijit.Datta@rps.org

This is a collection of fifteen lockdown hardship stories of Indian migrant workers.  Each had migrated long distances with their families to work in Kolkata as casual construction labourers, street vendors etc.  Once lockdown was imposed, factories and workplaces closed so their work and income ceased for months.  Each were anxious about returning with little food or money to their homes, often in remote rural parts of a different state such as Bihar, Orissa or Jharkhand.  Their experiences are representative of millions of migrant workers; following lockdown many went hungry.  Thousands began walking back home hundreds of miles away, with no means of transport due to lockdown – acts of bravery and resilience.  In response, Central and State governments took measures to help them and arranged special transport.  They are all heroes, fighting hunger and poverty along with coronavirus.  I spoke with them, and with their permission, photographed them.

I noticed a man selling toy parrots in the street.  I ducked into the road to take a low-angle shot of the man holding those birds; luckily it was evening when all the birds especially crows were returning to their nests - and that's how I got the shot.  I have tried to juxtapose real birds with the toy ones he sold; this shot was taken during a 6 month lockdown; local vendors like this man were severely affected as they and customers could not step outside the homes so their businesses were failing due to government imposed restrictions.  However, this man who had left his village and moved to the big city in search of a decent income broke lockdown and left his house risking his life to the virus selling toy parrots in hope that someone will buy them and he will earn some money.  The reaction in the man’s the face shows it all “Hope is a good thing, probably the best of all things and no good thing ever dies”.  Apart from all the hardships and pain, this man believes that someday things will change and life will be better. 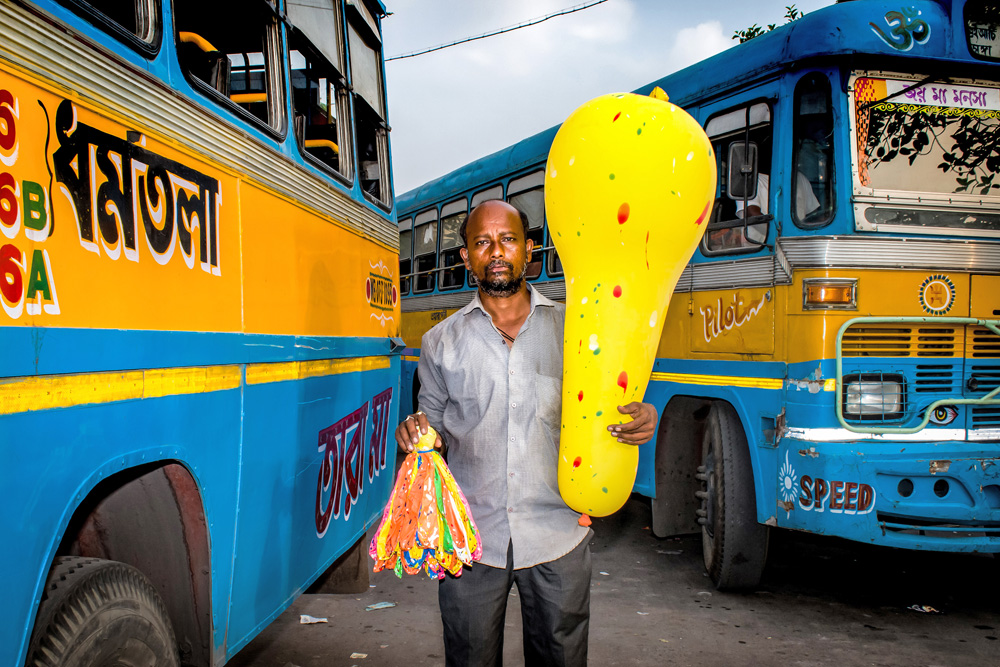 Kolkata bus stands are usually crowded; during lockdown, however, the area was deserted.  I found this man forlornly trying to sell balloons in the street.  He explained that he had been adversely affected by lockdown.  Men like him left their village homes and translocated to big cities, hoping to earn money for their families.  Now they became indigent; because transportation closed during the lockdown they can’t even return back to their village. 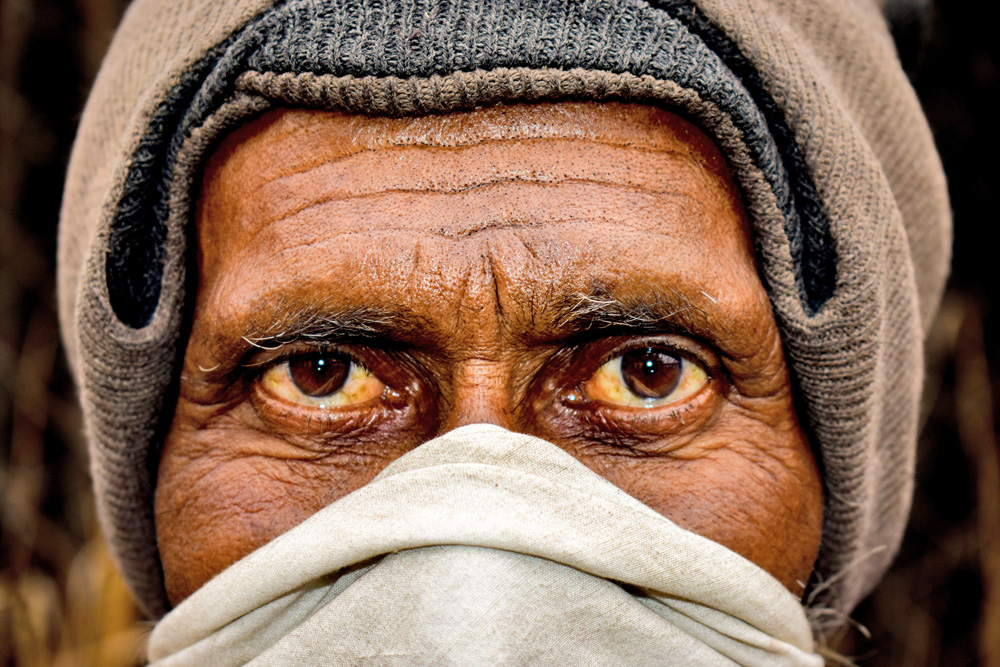 This my personal favourite in the series.  The eyes of a brick kiln worker peep out above a makeshift mask. 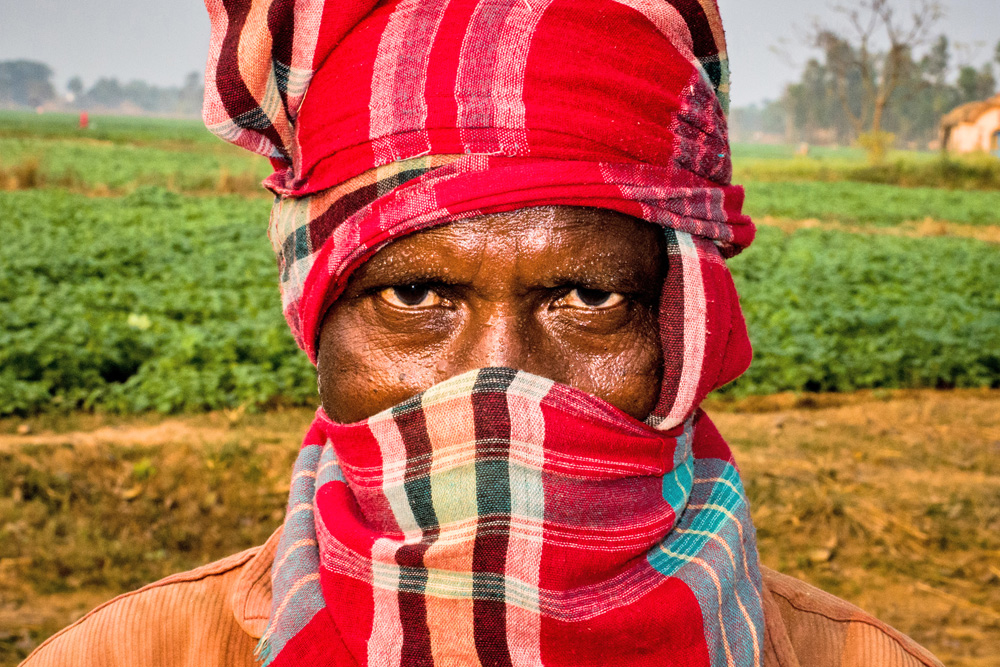 India is home to about 120 million smallholder farmers who contribute over 40% of the country’s grain production and over half of its fruits, vegetables, oilseeds etc.  A previous communist government in West Bengal redistributed land from wealthy landowners (Zamindars) to them.  Much of the global share of food staples such as rice and wheat comes from India; roughly half the population of India depend on agriculture for their livelihood.  However, lockdown affected many farmers.  On the outskirts of Kolkata I met a smallholder farmer who related his experience of being stuck in a foreign city, now without a proper source of income and food. 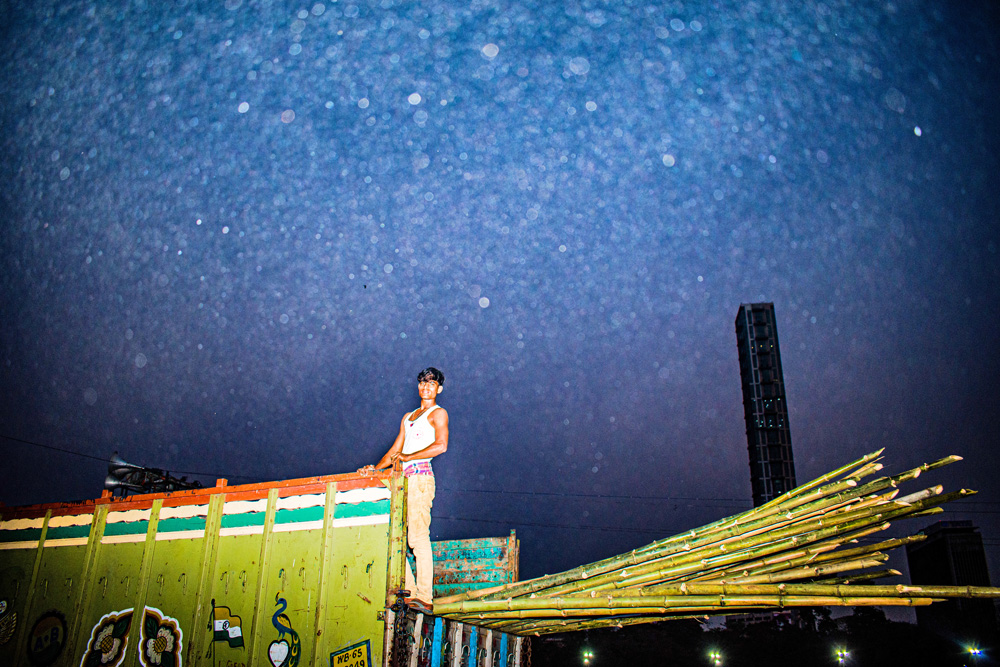 A labourer, working in an election rally (see  RPS Contemporary COVID-19 blog number 36 https://rps.org/news/groups/contemporary/2021/june/pandemic-politics-pursuit-of-oxygen-and-publicity/ ) was stuck in Kolkata during lockdown.  Originally a construction worker, his job ended during lockdown forcing him to take up seasonal labouring.  When the government announced lockdown, migrant labourers in cities found themselves in the desperate position of losing jobs, incomes and sometimes also housing.  Many of them had no alternative but to return to their home villages.  Transport being cancelled as part of lockdown, they walked hundreds of miles home, exposed to hunger and the risk of COVID-19 infection, poor conditions of enforced quarantine and harassment from a fearful populace.  Migrant workers that stayed in cities found working conditions worsen. 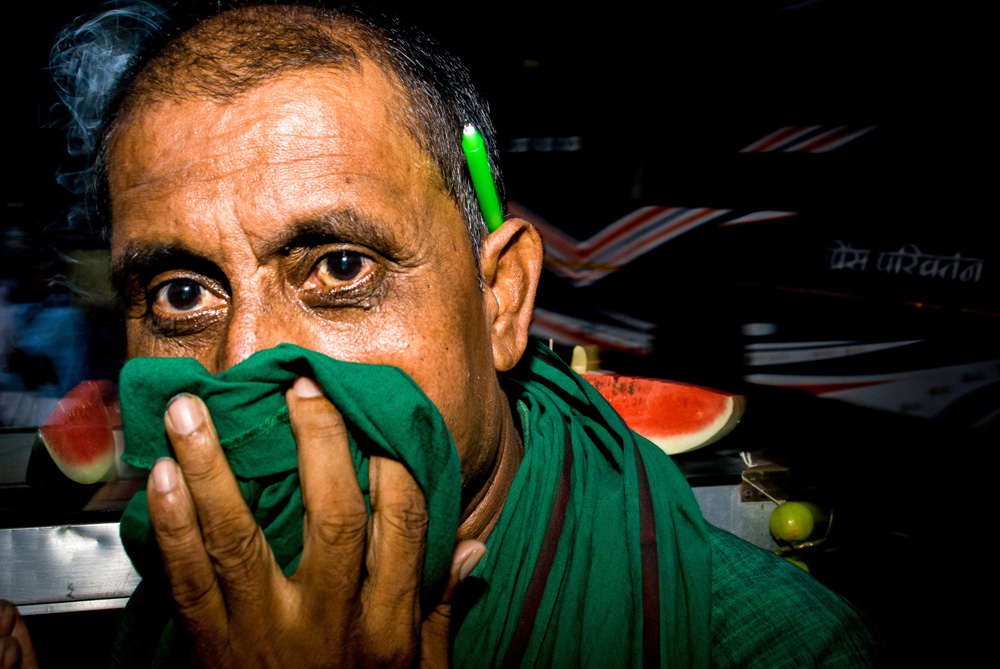 Ram Das was a migrant worker from a small town in neighbouring Bihar state.  He had migrated with his family to work as a local fruit seller in a Kolkata market.  He was anxious about returning to his hometown.  This shot was taken near the Esplanade bus stand in central Kolkata, where hundreds of workers were waiting and trying to get on a bus leaving for Bihar.  I love street photography, so I was there documenting the scene when I photographed Ram Das.  After I took the shot, he told me his name, his job, how he is surviving lockdown with his wife and young children and his attempts to return to his hometown.  In a bid to contain the spread of coronavirus infection, the Indian government announced a nationwide lockdown in March, 2020.  However, what followed over the next few months was an exodus of migrant workers from large cities to their native village homes. 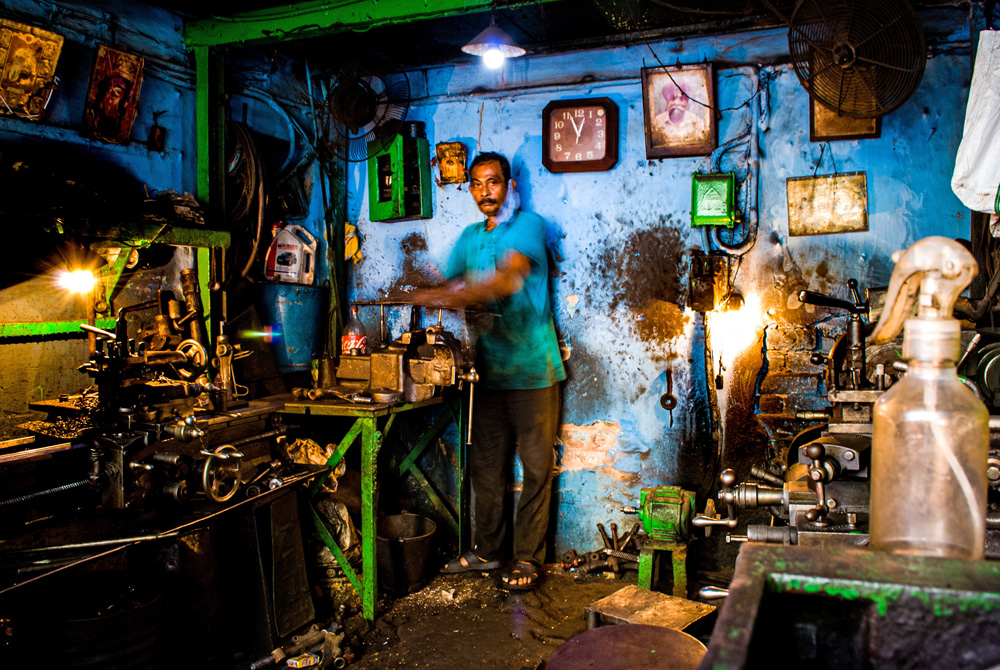 I think of this unknown factory worker, working while lockdown was imposed, as a hero.  A worker toiling in harsh conditions even during the pandemic, risking his own life for the sake of his responsibilities as a father, a son, and a husband.  Not all heroes wear capes, and not all heroes are recognized by society. 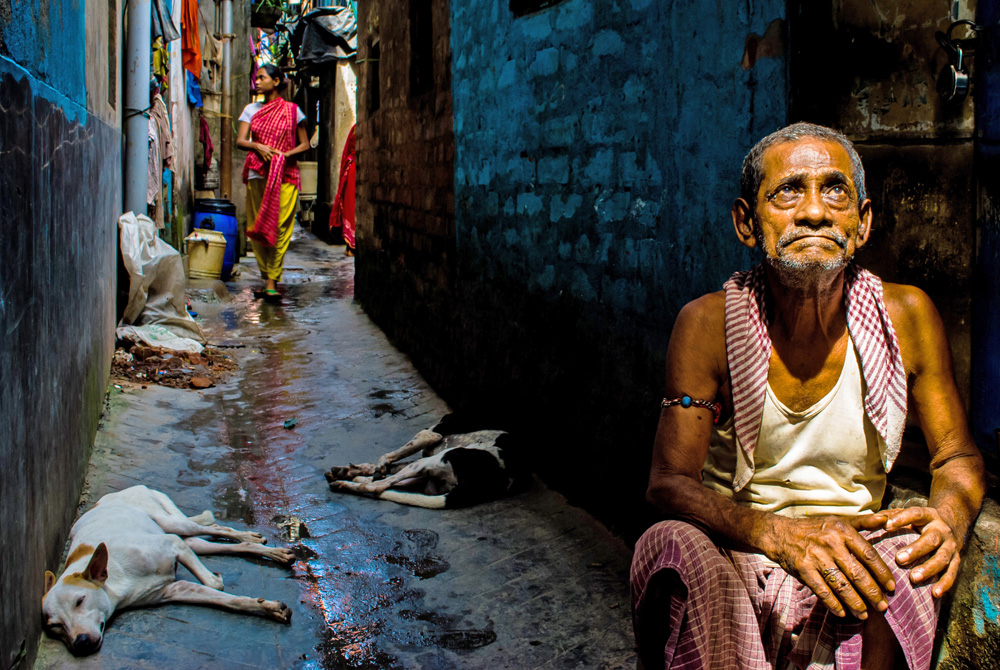 This old man's son was a labourer in Kolkata who had migrated from Bihar with his family and lost his job due to lockdown.  He believed that someday their condition will improve.  They didn't give up and not only survived the virus, but also poverty.  This family is an example of heroism and courage and that no situation, however bad, is permanent.  During a 6-month lockdown, he couldn't step outside the boundaries of his house, but he remained calm and hoped that one day everything will become normal again. 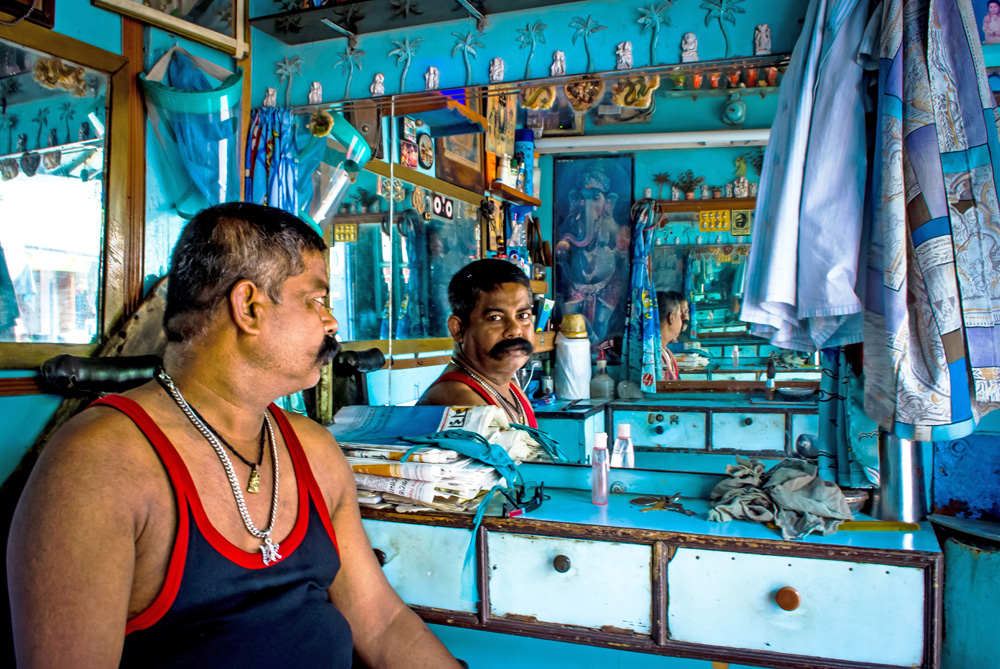 I was walking through Kolkata and found a small empty old fashioned barber shop.  Lockdown was over in India and people had just started coming out of their houses but maintaining COVID-19 protocols.  I had a conversation with the barber and discovered that his business was declining day by day due to lockdown.  During the conversation he looked at his mirror.  For me, this picture depicts a common man working hard in difficult conditions running a barbershop, despite difficulties. 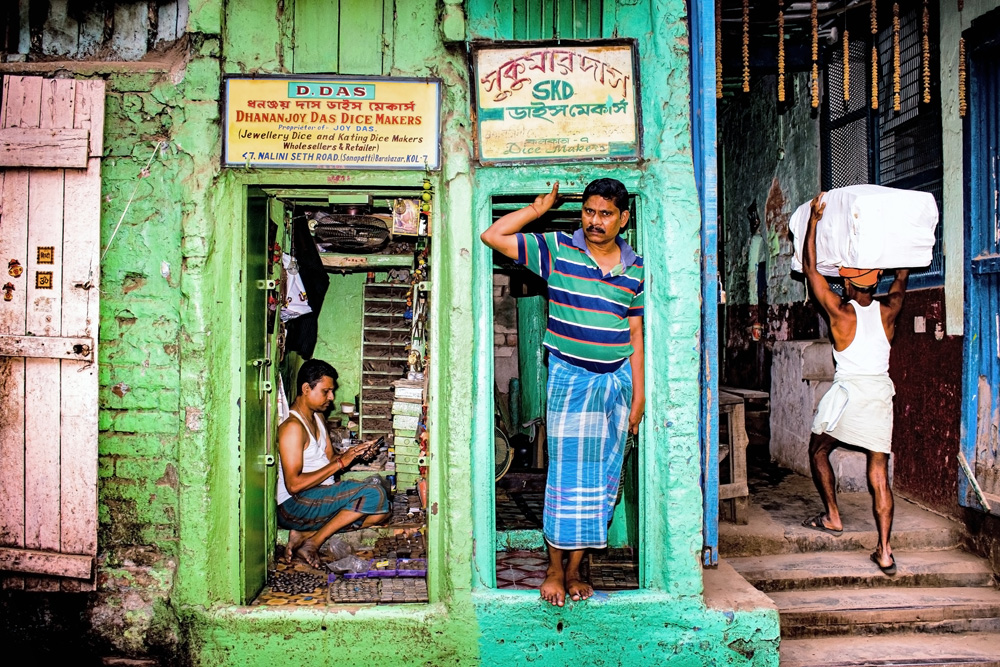 A shot of a local non-essential shop that was severely affected by COVID-19.  Last year, lockdowns impacted thousands of small-scale businesses.  Only pharmacies and grocery shops were allowed to open.  Workers in these small non-essential shops were most affected and were given permission to open only for a few hours a day – and then with fewer customers. 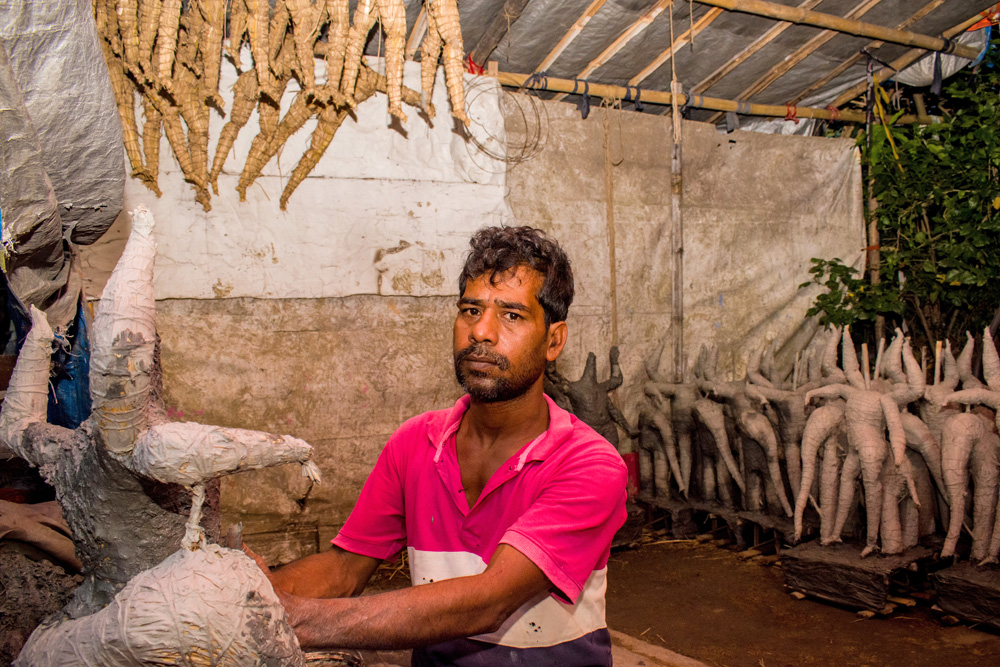 Tarun Pal moved from Orissa state to Kolkata.  Kumartuli is a traditional potters' quarter in northern Kolkata, renowned for manufacturing clay deities.  For six months during lockdown, Tarun Pal didn’t work on a single idol; before he would make 30 idols up to 10 foot high in a season.  The cost of raw materials increased during lockdown but customers weren’t buying due to the economic slowdown and restrictions on religious gathering. 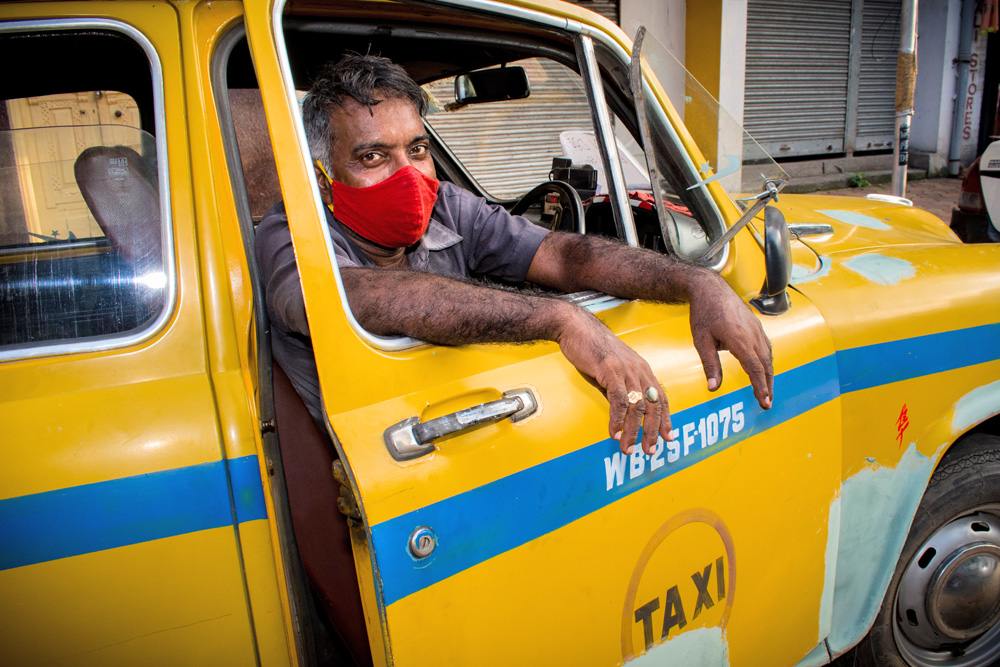 Adinath Sahu , Taxi Driver migrated from a small town in Bihar.  Due to lockdown, he has no work and finds it difficult to pay rent, vehicle dues and food His fear is that worse is yet to come; keeping taxis idle in humid heat for weeks caused deterioration in electrics etc.  Many taxi drivers are paying off debts incurred during prior lockdowns.  The government allowed taxis to ply for emergency journeys, but this is not enough to run Sahu’s taxi. 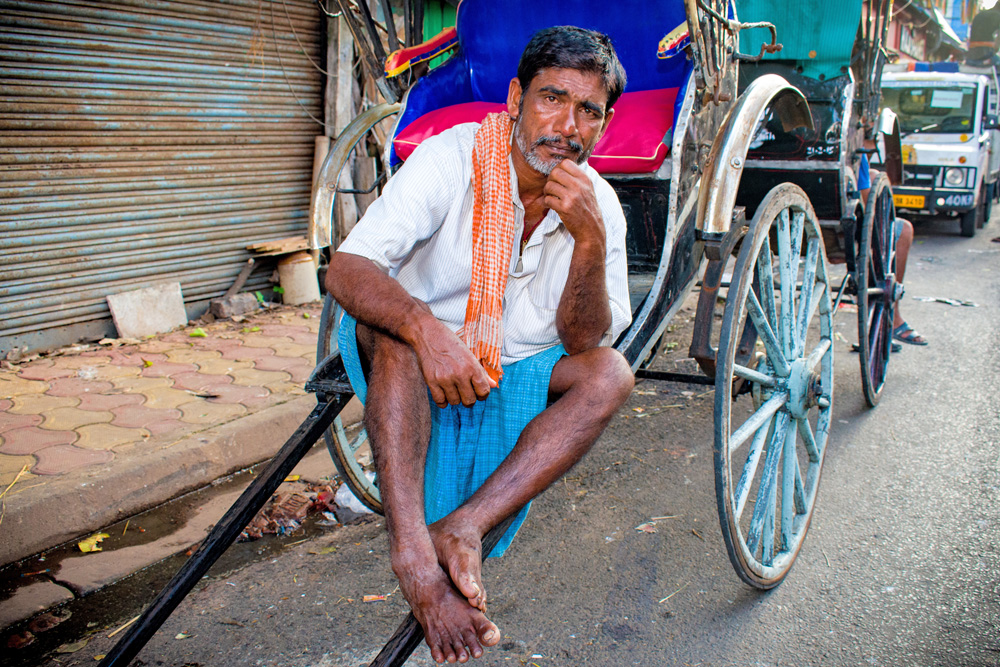 Fifty-year-old rickshaw puller Balbir Mahato said that on a good day he earnt Rs 300 (£4), but now making Rs 40 is tricky.  Many Rickshaw Pullers don’t own their rickshaws; they hire one - the daily rent is Rs 30, leaving barely anything.  If people do not come out, how could he work and earn money? He arrived in Kolkata from Jharkhand state twenty years ago.  He feels he can’t return as he feels there is no work for him there. 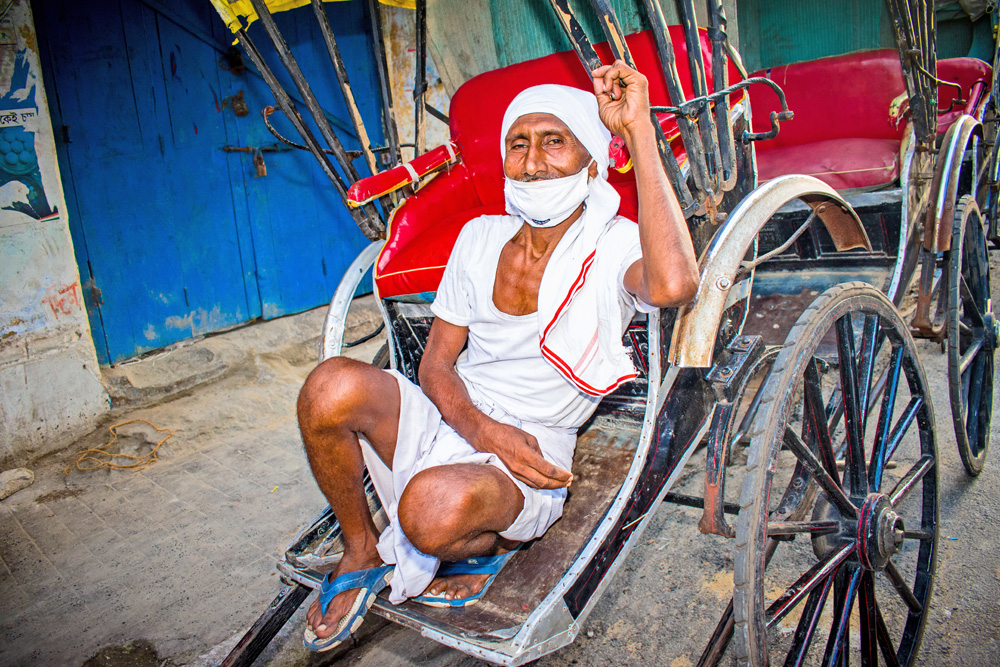 Babulal Shyam is a 60 year old rickshaw puller from Bihar state whose income dropped due to government imposed lockdown; he is also struggling to make both ends meet.  He continues to work at an advanced age and doesn't even know when he will be able to return to his hometown. 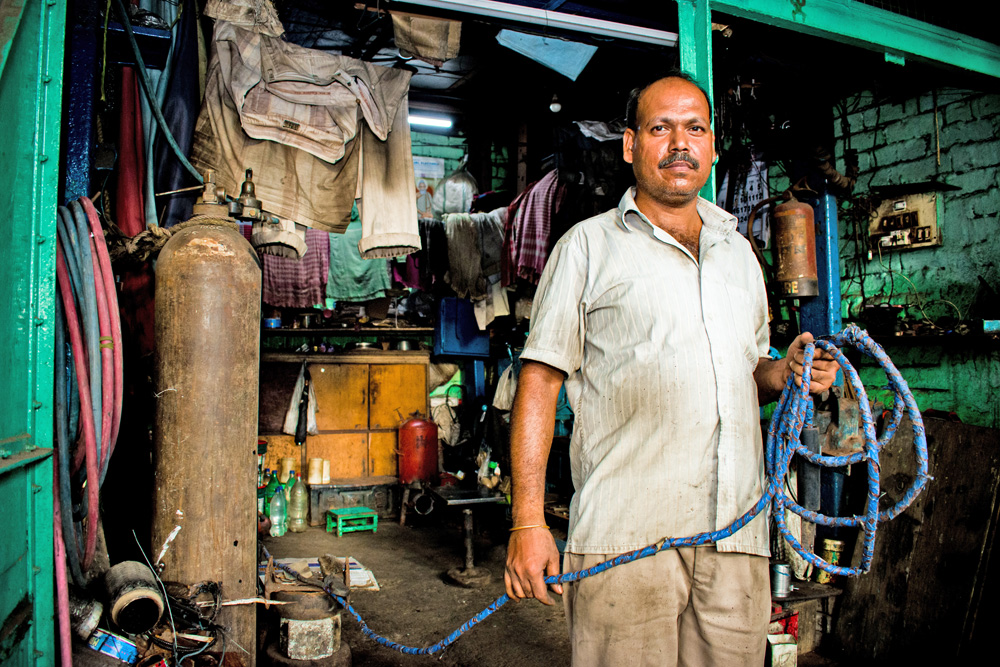 Most garages were closed during lockdown so mechanics lost their work and income.

From the 2011 census, India has 456 million (sic) internal migrants and 244 000 refugees, roughly one third of the total population.  They form a foundation of the country's economy, yet often have trouble accessing government benefits, identity cards, and other services.  The COVID-19 pandemic and the world’s largest national lockdown starting on March 24th, 2020, brought these vulnerabilities into stark relief.  Many workers walked back to their home villages.  The government of India assisted 5,800,000 migrants with specially operated trains and another 4,100,000 were transported by road; a $22.5 billion relief fund was established which doubled free food rations, helped senior citizens and, for those registered working in the construction sector, gave income support.

Blind, but I can See